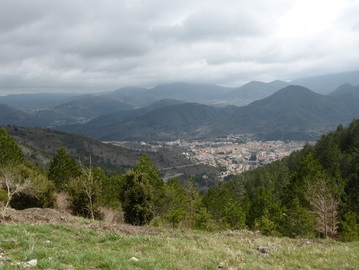 Fantastic views as we drive up into the French Pyrenees.
25 March 2015
A little sun at last as we head for the principality of Andorra in the Pyrenees between France and Spain. We climbed up to about 1500m and had a fantastic view over the mountains under blue skies but an hour later it was sleet which was horrible to drive in. After lunch we climbed further. This time there was light snow and very white in the distance. We were starting to think we should have made the efforrt to check out road conditions as some snow laden vehicles passed us going down the mountains. Snow mounted up on the roadside and ice started to creep onto the roads. Fortunately the snow stopped falling as we reached Andorra. We drove through a tunnel and emerged to clear roads and people skiing down the slopes in brilliant sunshine.

Thursday 26 March
It had been well below freezing under the starry sky last night but it was warm in the truck, a toasty 2C. It was 0C at 8am in the sunshine outside. Still sunny skies as we head south to Spain.