2 December 2019
Arrived at the border. It took about 30 minutes to leave Ecuador once we worked out where to go and then about 40 minutes to enter Colombia once we had got the photocopy of the Colombian entry stamp from Guys passport for the truck entry permit. From there we drove to the nearby town of Ipiales to get supplies and Colombian pesos.
Only about 5kms away to Las Lajas where we spent the night at the carpark for the teleferico to the Sanctuary.
The building of Santuario Las Lajas began in 1916 and ended 33 years later. 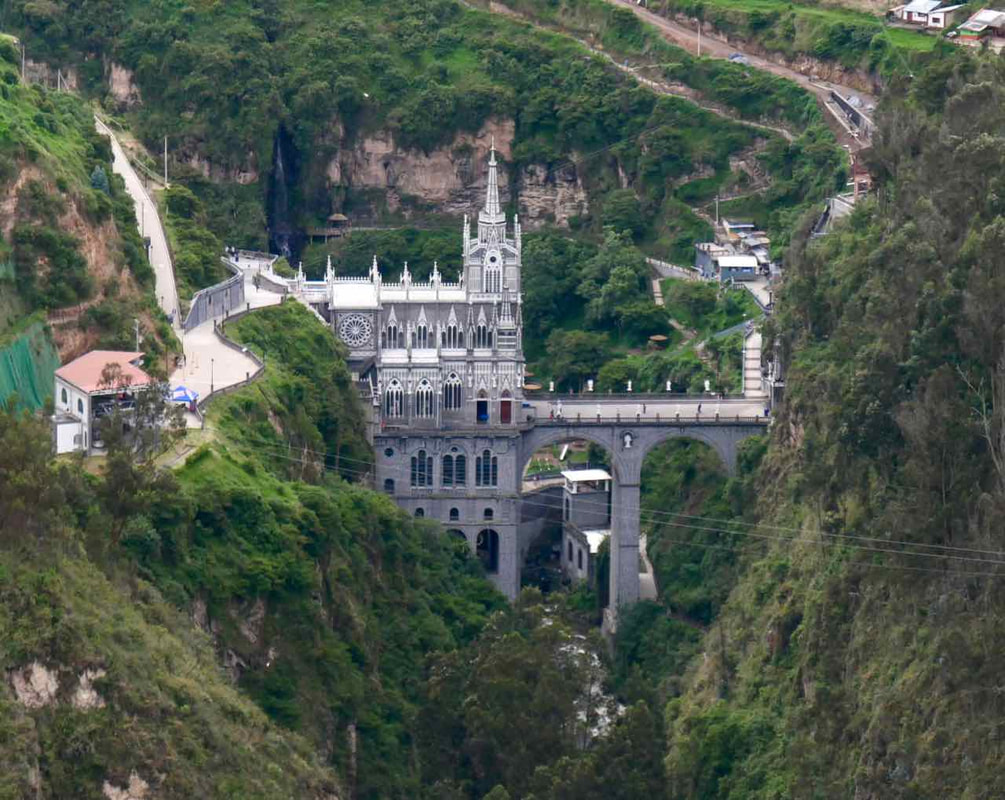 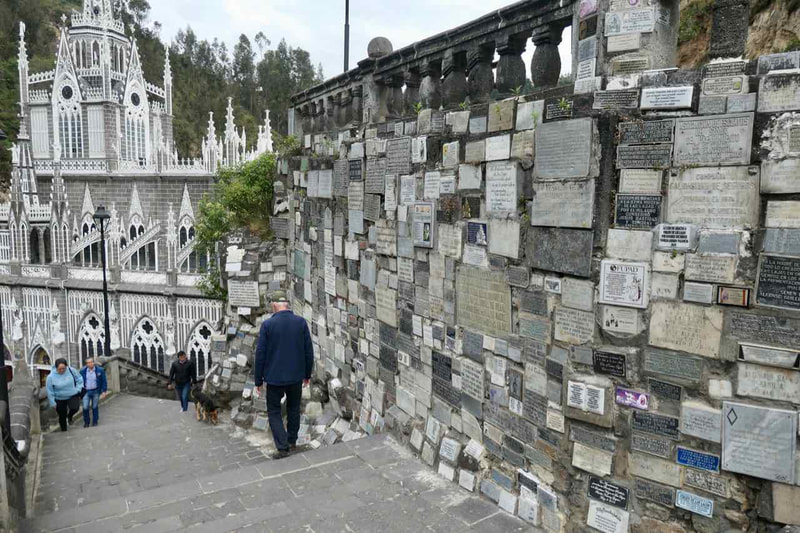 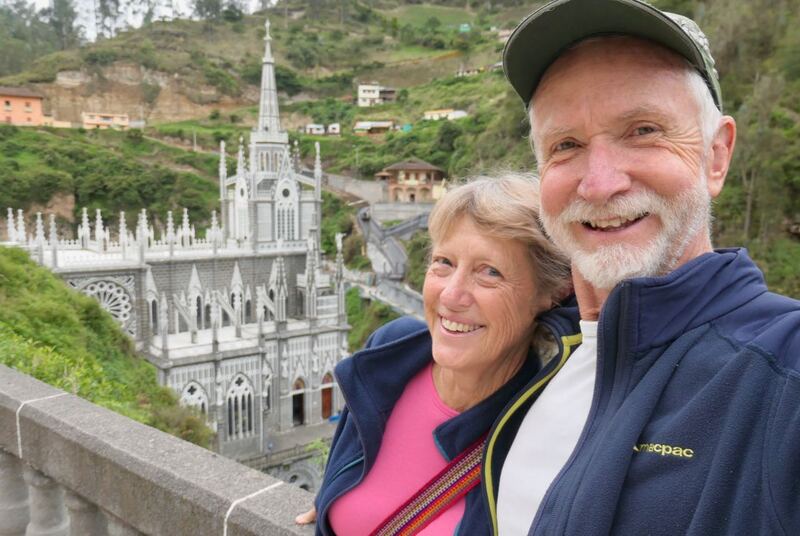 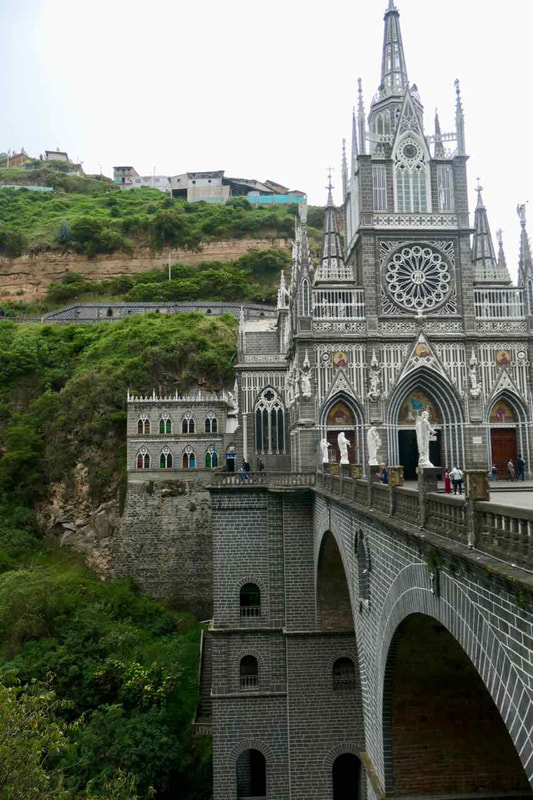 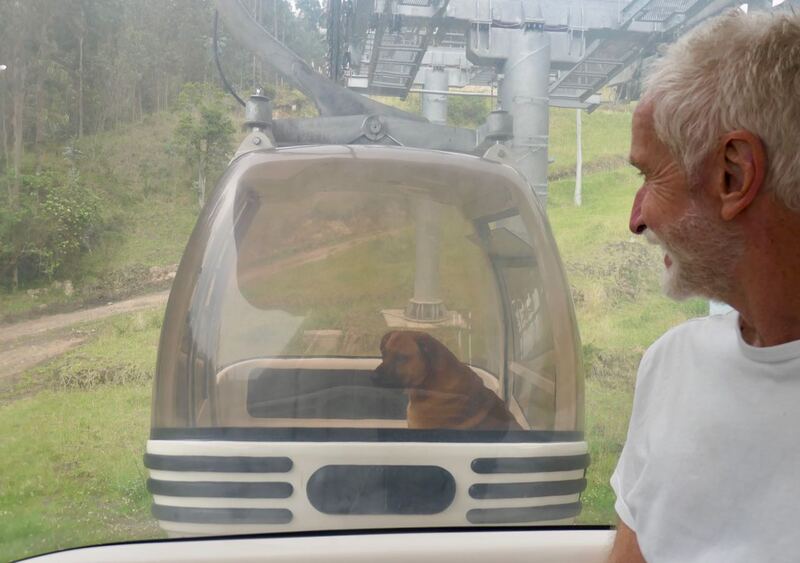 3 - 6 December
Over the next few days we visited El Puerto on Laguna de la Cocha with its very Dutch setting; Popayan, the white city and then further north on the Panamerican highway we turned off towards Silvia, a village bordering a large indigenous area, including the Guambianos people. and stayed at La Bonanza.
Our visit to Silvia was on a Thursday which meant we missed the big market day. However many indigenous were still around and very visible in their distinctive clothing in shades of indigo, ficshia and black. 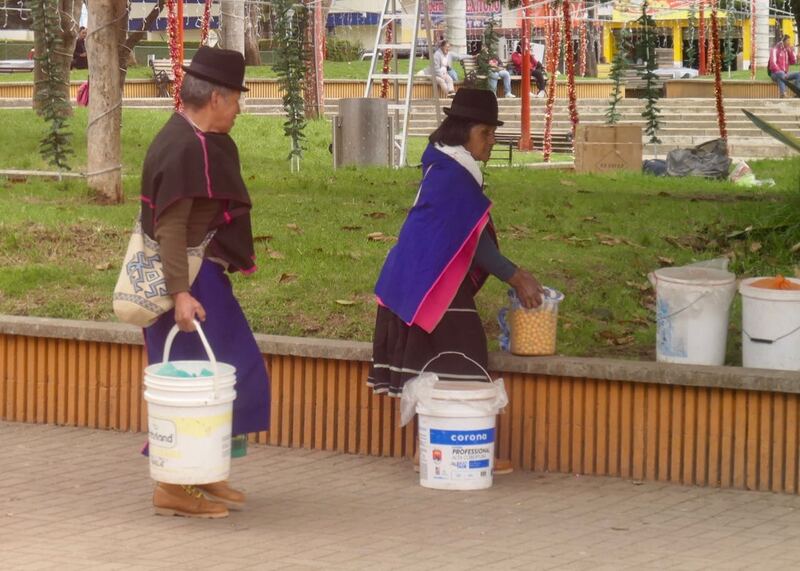 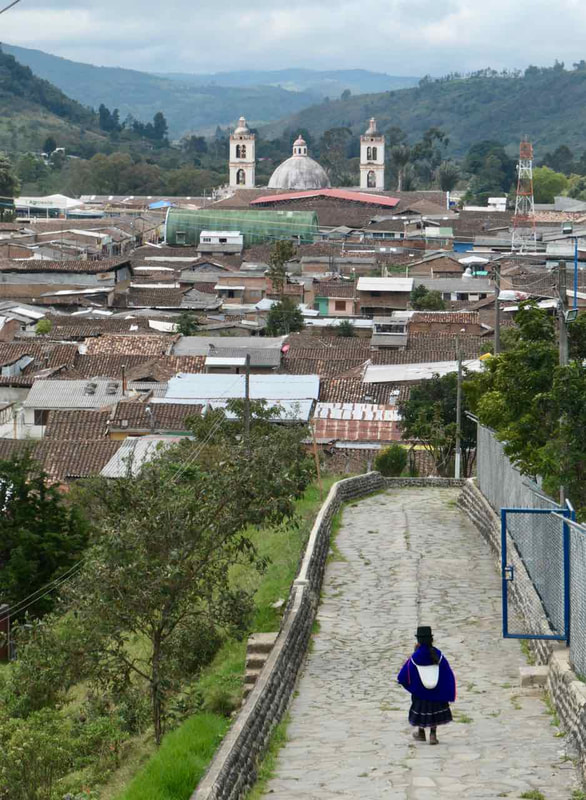 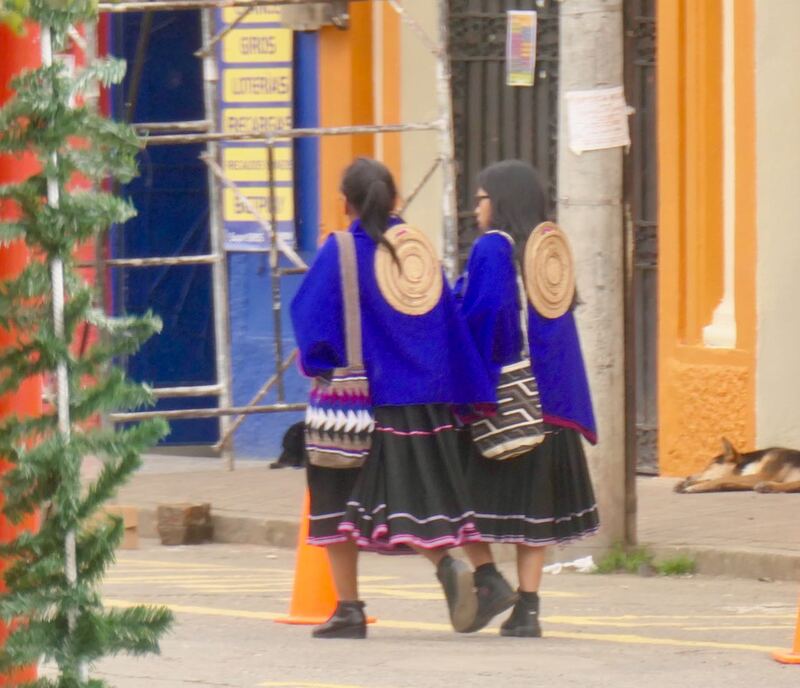 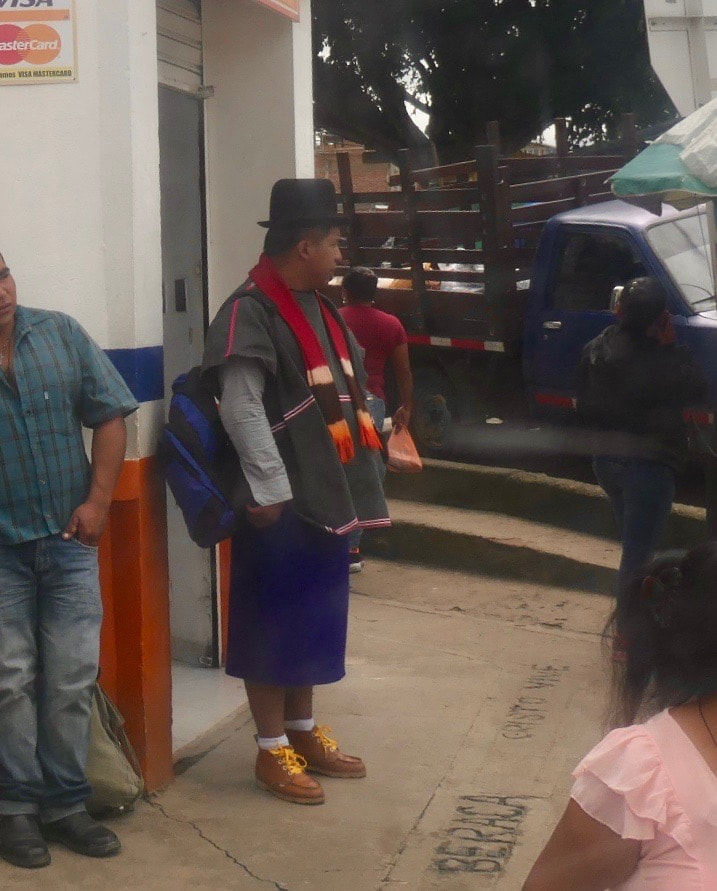 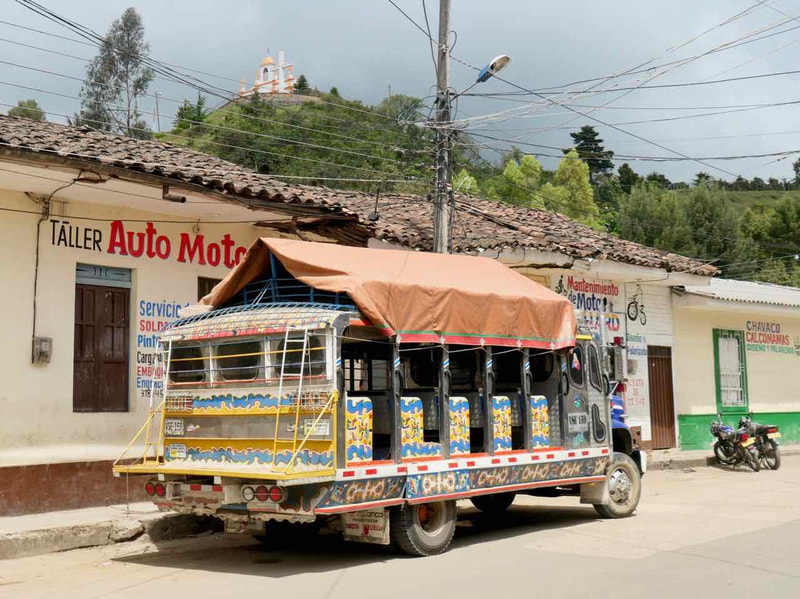 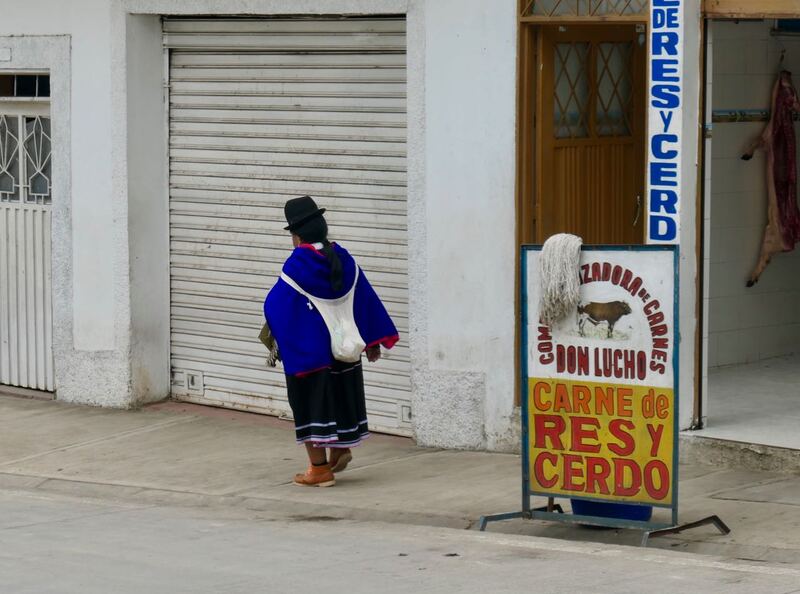 7, 8 December
A long drive to Filandia, where we arrived in the early evening to the festivities for the Feast of the Immaculate Conception and the start to the Christmas celebrations.
In the morning we caught a Willys Jeep from Filandia to Salento and on to the Valle de Cocora. Many palms stood solitary and sad in dairy farms but further away we could see them in some forested areas. There were light showers and a little fog which made walking on the stoney paths a bit hazardous especially as we had to share it with horses.
9 December
A beautiful drive through lush moutainous countryside over the central Andes to our last stop for this year, Bogotá. Some of the scenery below. 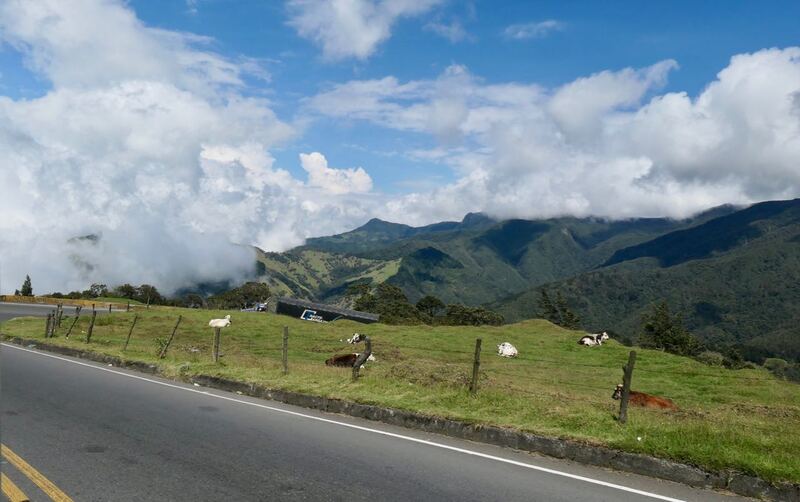 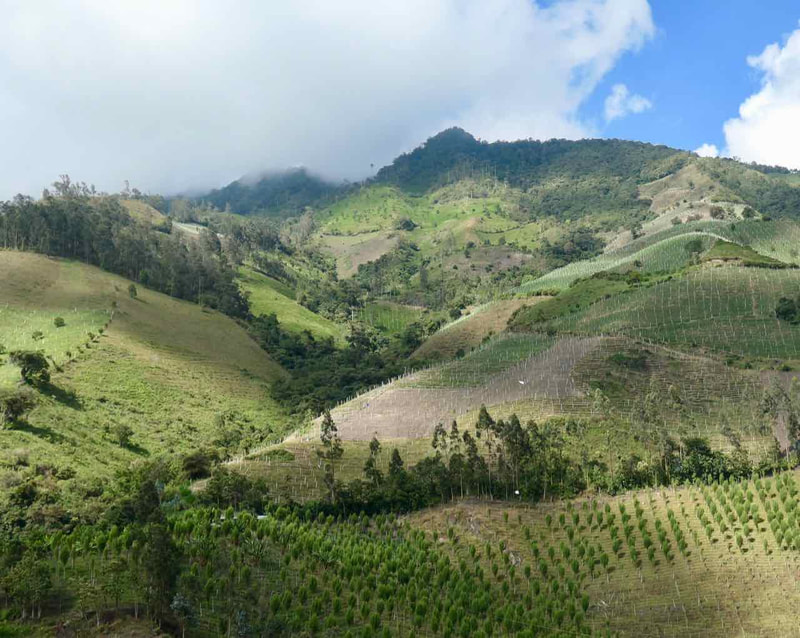 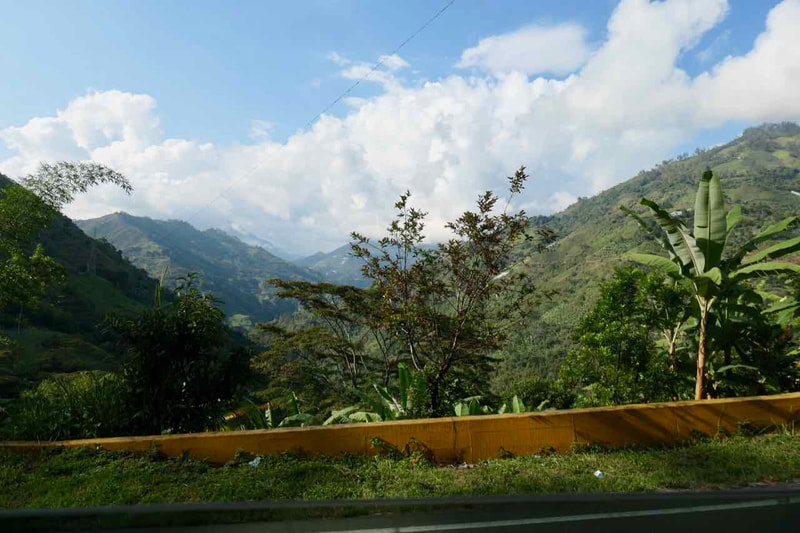 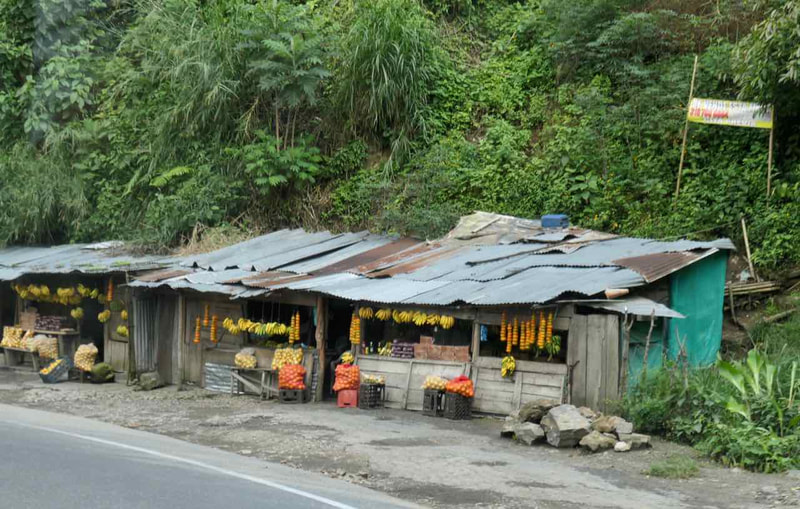 Whether having the steering seen to, a wheel alignment done or a new horn befitting the truck, we always seem to gather an interested crowd at workshops! 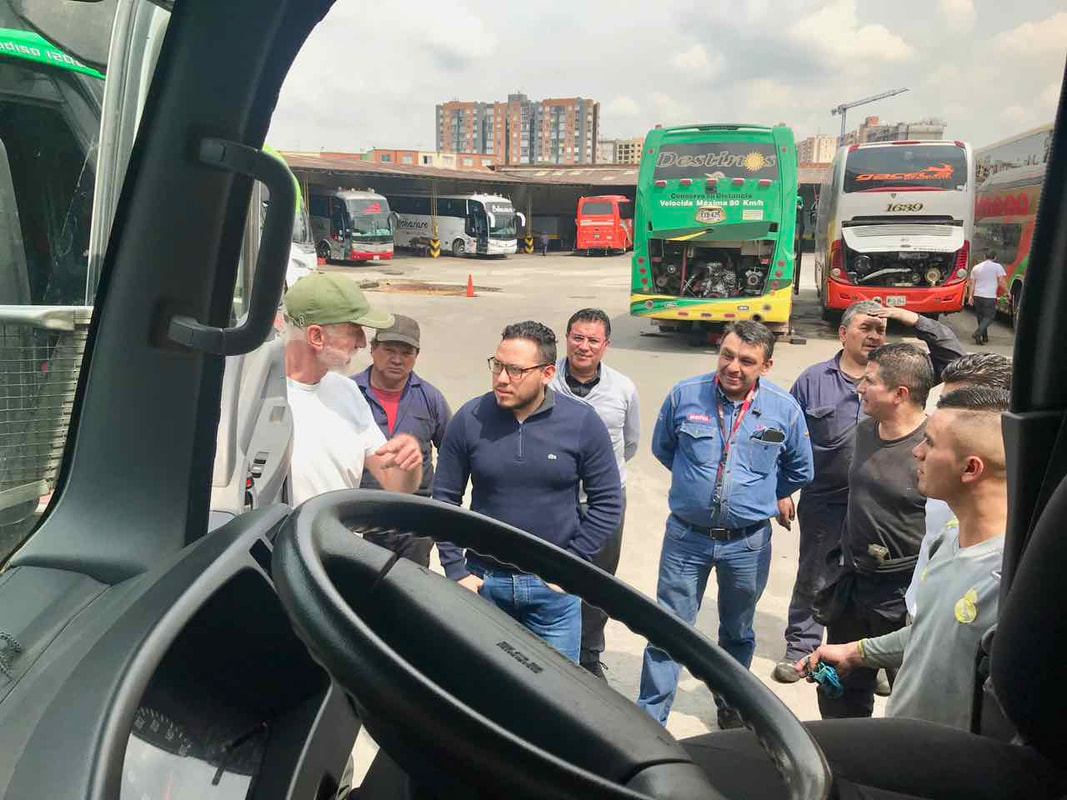 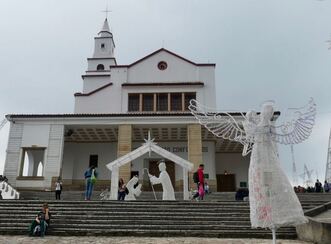 Iglesia del Señor Caído de Monserrate - named after a monastery in a mountain in Catalunya, Spain.
​10 - 14 December
​Bogotá
We did a tour of Bogotá starting with a 30 minute drive to the east down El Dorado Avenue, a multi-laned road divided by planted green areas accommodating public transport and excellent cycle paths. As well as shops, the street is lined with office buildings of large public and private institutions.
On arrival at the eastern end we took a cable car up Montserrat, the mountain overlooking Bogotá.  Unfortunately the weather wasn't very clear and so the views over the city and beyond were limited.
A stroll through old Bogotá to Plaza de Bolivar where recent demonstrations had taken place, the Cathedral and the gold museum. 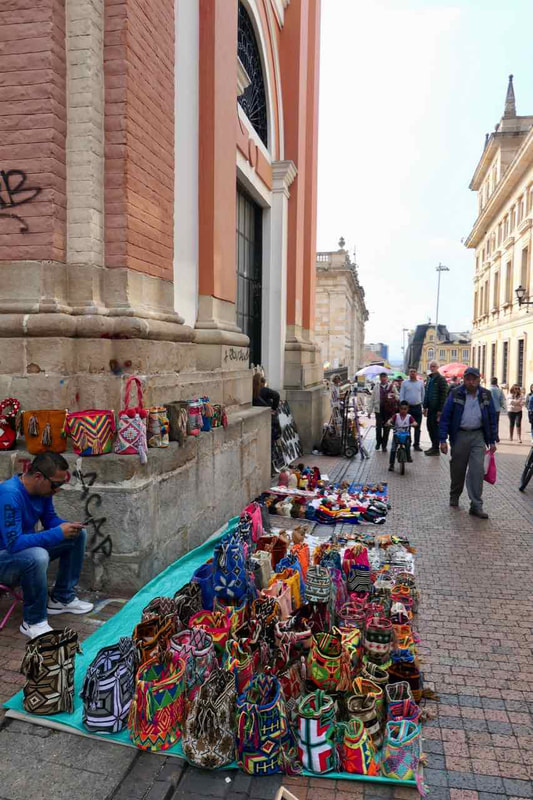 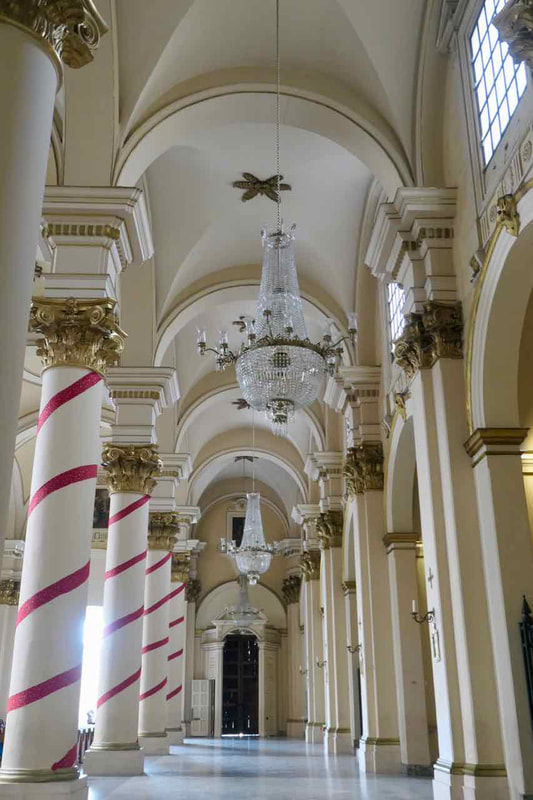 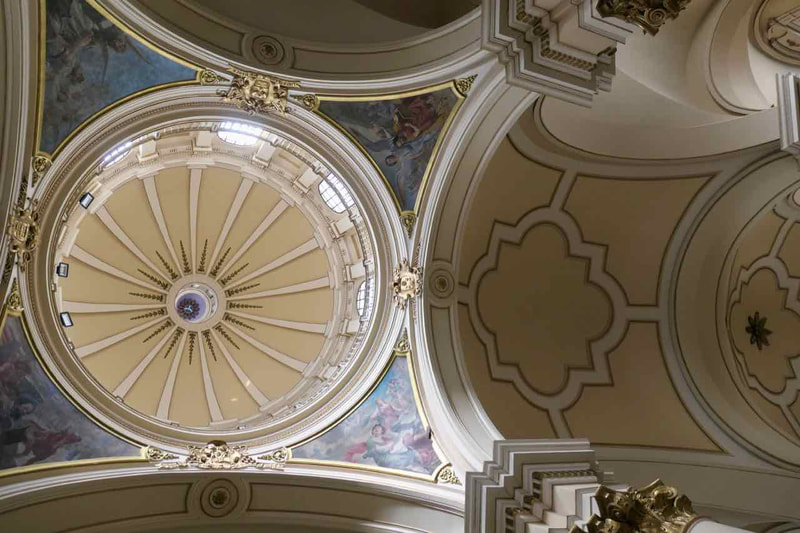 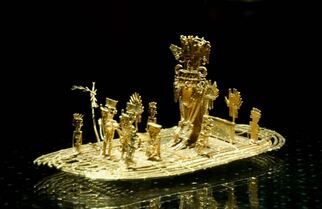 The piece has a base in the shape of a log boat with dimensions of 19.5 cm x 10.1 cm.
The Gold Museum (or in Spanish "El Museo del Oro") in Bogota has the largest collection of pre-Hispanic gold items in the world. In 1934 the Bank of the Republic began helping to protect the archaeological patrimony of Columbia. The first object in the collection was "Poporo Quimbaya".
Another interesting piece was the Muisca raft (1200 - 1500 AD) which refers to the ceremony of the legend of El Dorado. It represents the ceremony of investiture of the chief, which used to take place at Lake Guatavita. During this ritual, the heir to the chieftainship covered his body with gold dust, floated out on the raft to the centre of the lake, jumped into the lake along with gold offerings and emeralds made to the gods from the shore
​The piece is in the shape of a raft with various figures on it, the largest figure that stands in the middle represents the chief, which is adorned with headdresses, nose rings and earrings, surrounded by his soldiers who carry banners.
The raft was found by three farmers in 1969. 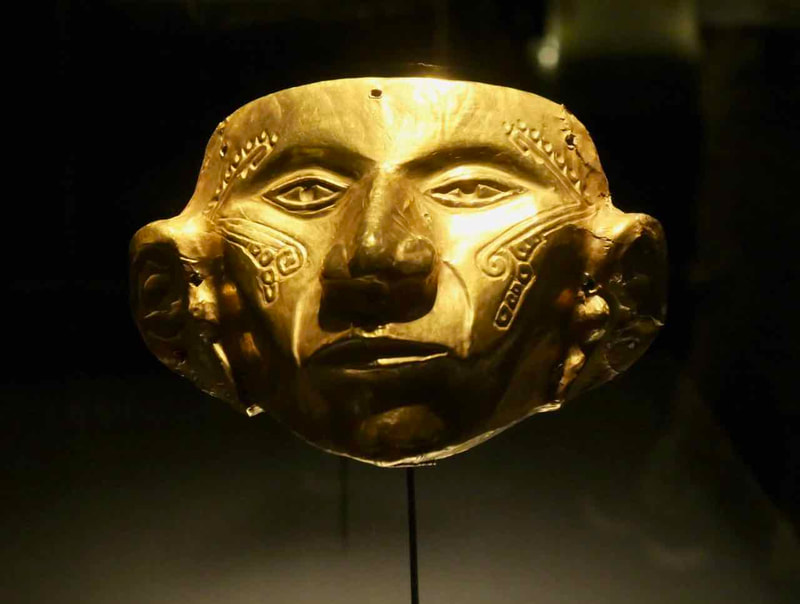 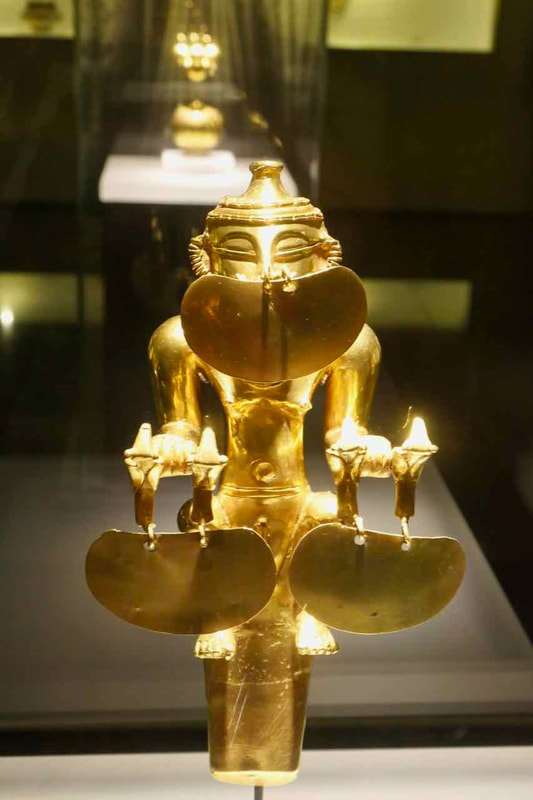 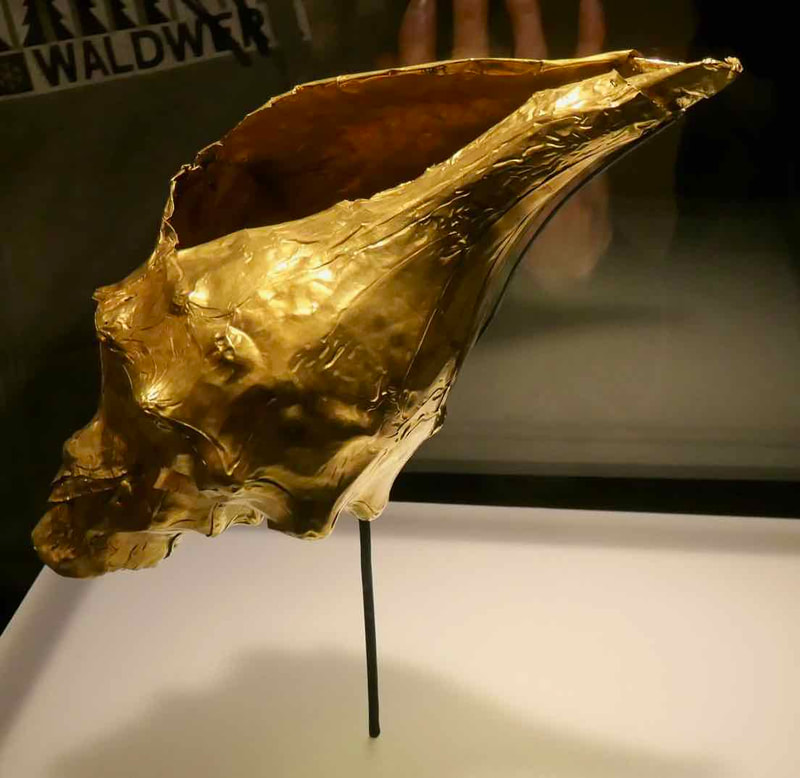 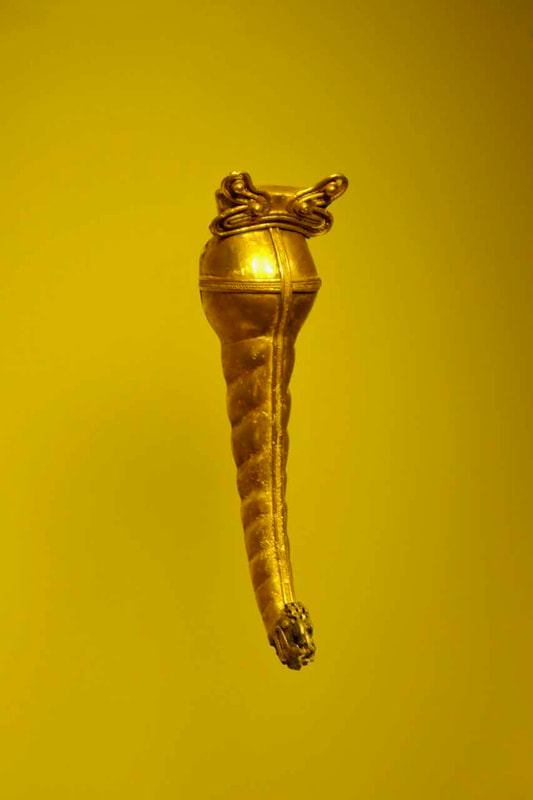 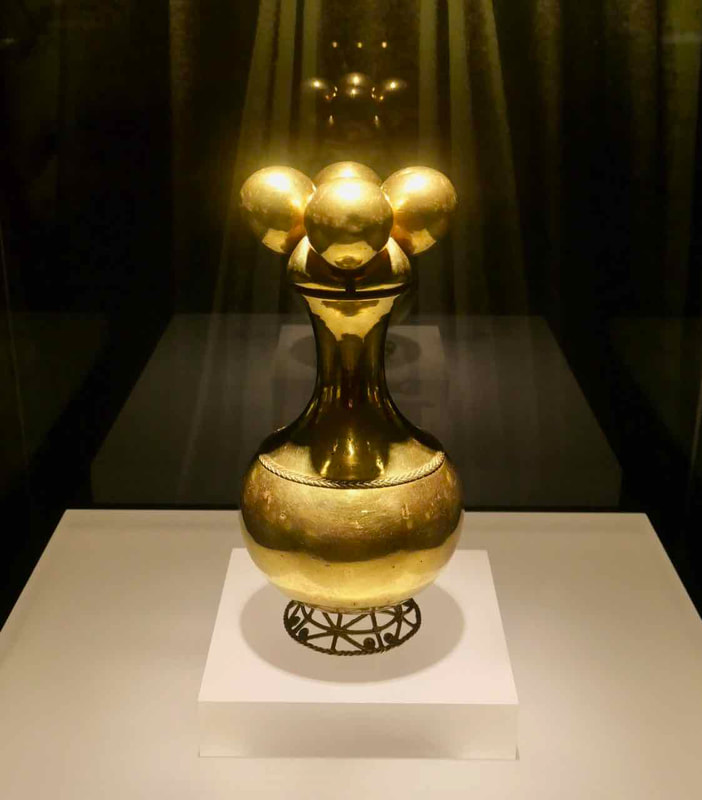 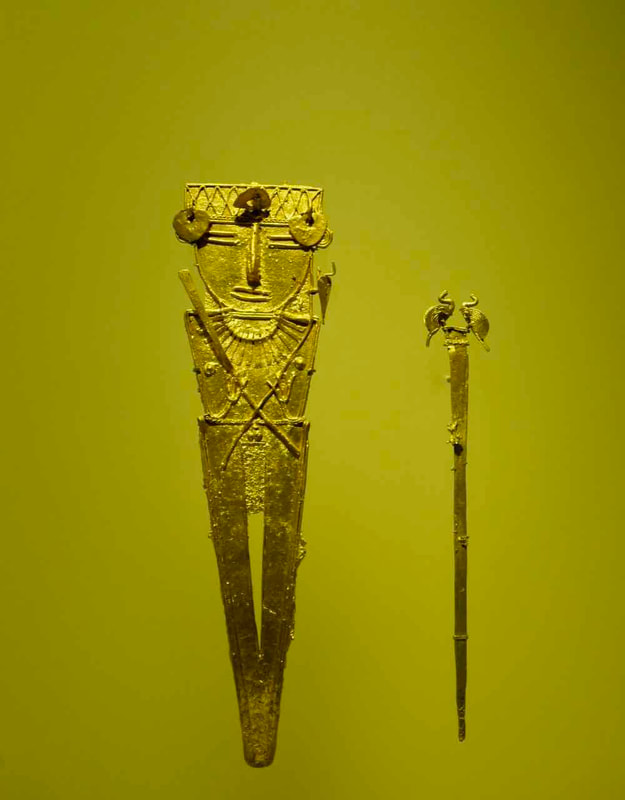 Our travels through northern Colombia will continue in late January/February 2020.