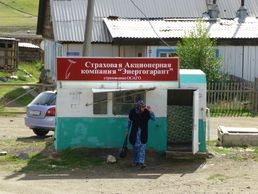 Third party insurance office.
9 August 2013
Slow border crossing as we were behind 2 vans that had pushed in on the Mongolian side. There were 20 passengers in each van with loads of luggage that all had to be put through the x-ray machine and then the processing of 40 people. Then there's the lunch hour when the gates are locked and everything stops. We emerged 7 hours later in Russia but we then had to get 3rd party insurance which took just less than an hour. 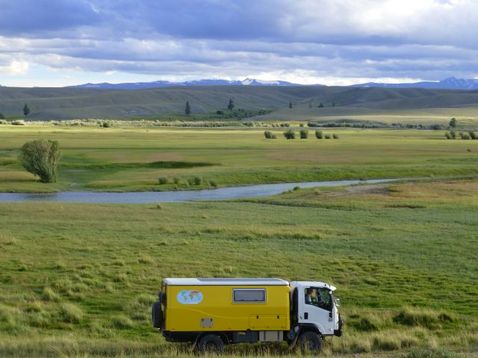 First campsite in Siberia.
10 August
We drove along the Chuysky Trakt which runs through a stunning valley with snowcapped mountains and glaciers on one side and rolling hills on the other as well as following a fast flowing and widening stream with wildflowers blooming to top it off. It was truly stunning and went for about 200 kms. Our campsite that night was the best. 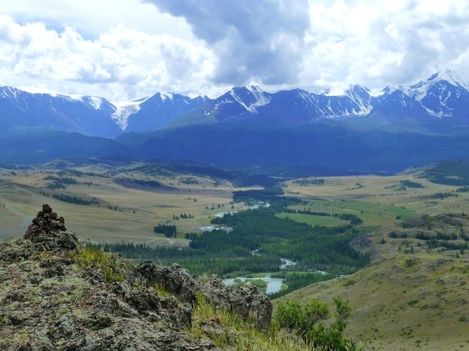 Great views from our campsite to glaciers and peaks over 4000m.
11, 12 August
We drove 160 kms further west along the sealed road to get to a campsite on the other side of the river. We were surprised to see we would have to cross a suspension bridge. Fortunately we were under the 7 ton weight limit, being 5.8 ton, but passengers had to walk across the bridge as drivers had to be alone in the vehicle. Just a few creaks from the bridge.
Camped beside the fast flowing and rising river for 2 nights. Very pleasant place to relax even though the weather was overcast most of the time. 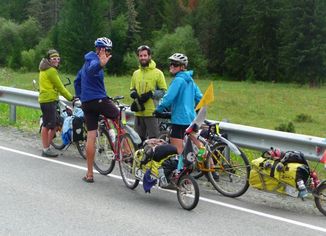 Two American and two French people who had cycled from Turkey.
13 August
One day off and time to experience the suspension bridge again on our way to Lake Telestskoe via Gorno-Altaysk. The water level was almost a metre higher.
Passed lots of souvenir and shashlik stalls and some cyclists about to go through Mongolia having come from Turkey.
14 August
Drove on to Lake Telestkoe. Unfortunately the weather remained overcast and rainy but we were still able to enjoy the scenery and a boat ride on the lake . Very picturesque.
15, 16, 17 August
We spent the next day seeing if we could get the shock absorbers repacked. But the Russian mechanics were reluctant and so we bounced our way towards Kazakhstan finally crossing just south of the pretty little Russian town of Kalunda. Massive areas of grain and sunflowers had been planted.

Bee and her minions.