Saturday 16 March 2013
We've arrived in Thailand, the border crossing took about 2 hours. First buying Thai 3rd party vehicle insurance for Thailand, having our Carnet by Malay customs to show that we left the country and didn't sell the truck, the usual passport stamps and then on the Thai side our rego papers had to be translated to Thai. It was done free of charge. 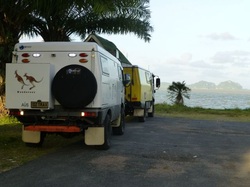 We drove for a couple of hours turning off the main road in pursuit of some hot springs - crazy considering the heat and humidity. But these decisions are made in the comfort of the air conditioned cab as we drive along. We couldn't find the springs and so we camped on the side of a huge lake, checking with the locals first. What we didn't know was that a shadow puppet show was being staged on the grounds near us that evening. 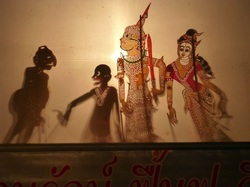 We were invited along and given watermelon, a bowl of chicken rice and milk coffee. A bit worried about the food in these situations but we didn't want to seem ungrateful or rude.
We felt reasonably well adjusted having only cooked twice since leaving Australia because it is so cheap to eat locally.
Sunday 17 March
We passed several men walking their well cared for bulls later found a local bullfight. The handlers hold onto ropes as the bulls lock horns until one bull gives way, probably falling over. Ventured on to find the Khaochaison hot spring we had looked for yesterday. Had a break then drove on towards Krabbi, eventually finding a campsite with fixed tents used by schools.

The days travels.
18 and 19 March
Fantastic limestone landscape here and the Andaman Sea....very warm.
Even the locals were complaining about the heat. It didn't get below 30C in the truck last night as well as being very humid. We found an airconditioned coffee shop with free wifi. A much better way to spend some time. The other cool thing was being a passenger in the bike taxis - great breezes.
We did a tour to some islands just of the coast. 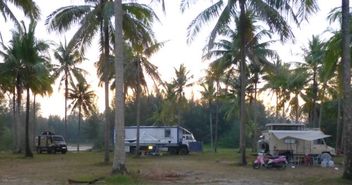 20 March and we are off to Khao luk further north. A beach with a bit more depth and some very interesting vehicles used by other overlanders, including a 4 axled truck with a container on the back, a Bremach and an almost 20 year old Iveco 40.10 WM which was the homiest vehicle I have ever seen.
22 March
We can't stay here for weeks and/or months like others so we head up the west cost within a kilometre of the Burmese border at times and then over to the east coast and up to a beach just north of the shrimp farming and drying area of Bang Saphan. It does smell a little!
A long day with over 380 kms travelled. 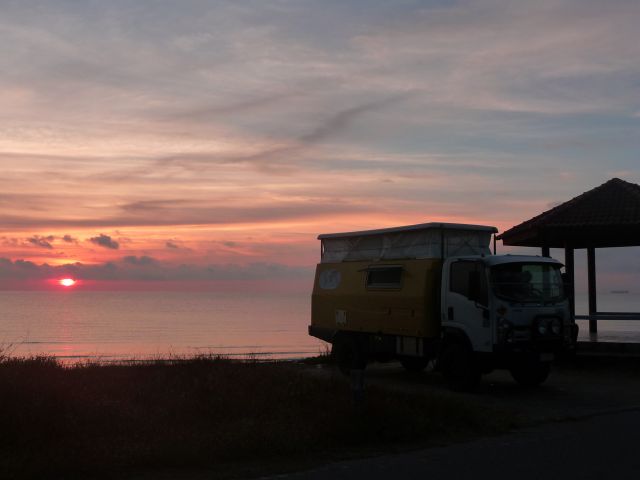 A stunning sunrise across the Gulf of Thailand before we set off for a golden Buddha and a temple we can see to the north of us. After that we go on to the Khao Sam Roi Yot National Park. This is limestone country and in the national park there is a cave that has collapsed, allowing light and rain through. Vegetation has grown and a temple has even been built there.

See the route for today
Sunday 24 March
Driving up to the River Kwai today. Highway driving so about 80 - 90 km/hr for us. Guy predicts the Thai drivers drifting across lanes very well. Much drier countryside but still hot and humid. We arrive into Kanchanaburi and see the bridge over the River Kwai. 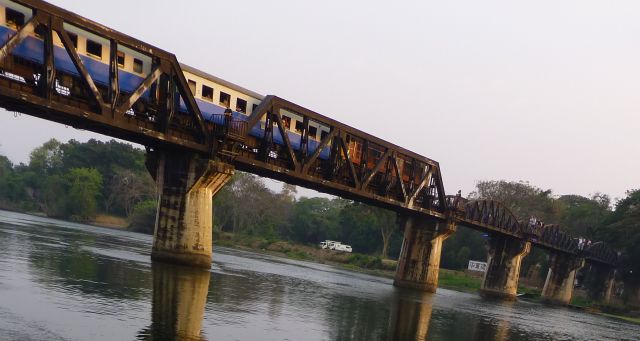 Bridge over the River Kwai. Our trucks camped on the other side.
Monday 25 March
We spend the day here. New maximum temperature in the truck - 46C! Fortunately we were in an air conditioned shop. But it is not easy to sleep at night when you go to sleep in 32C with one little fan doing its best which is just not enough.
We went for a sunset ride in a longtail speed boat. It started off well and was actually very pleasant passing the houseboats towing private parties. On the way back, we sped into swarms of gnats, tiny mosquito like insects. So I didn't talk or open my eyes too wide. 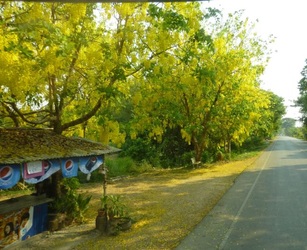 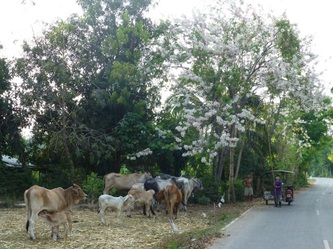 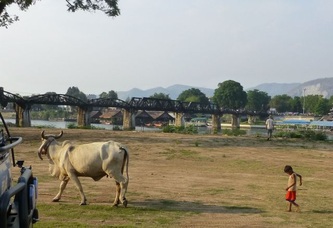 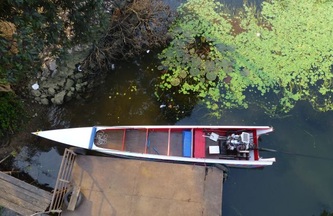 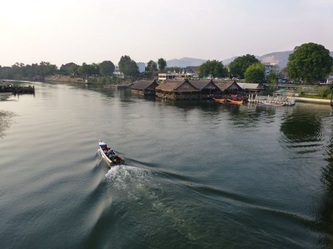 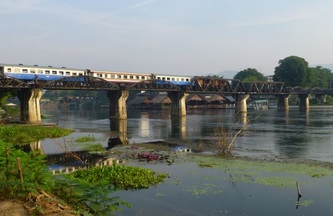 Tuesday 26 March
We spent most of the day driving north to Kampaeng Phet an old city with a crumbling laterite city wall. We camped inside the old wall which was about a kilometre from the city. No one around except some young guys talking a hundred metres away. No map as pocket earth didn't map the route.
Wednesday 27 March
We drove to King Taksin the Great National Park via Tak. Love these names.
Passed heaps of nurseries and pottery shops as usual. The Thai people really appreciate their gardens and it is also evident in their public places and even workshops. They are also very tidy people with very little rubbish on the streets. Quite different to Malaysia.
We went for a walk in the National Park to see a 700 year old Krabach tree and a waterfall, crossing paths with Buddhist monks along the way. One group were like an apparition in the bush as we came around the corner in the bamboo forest. 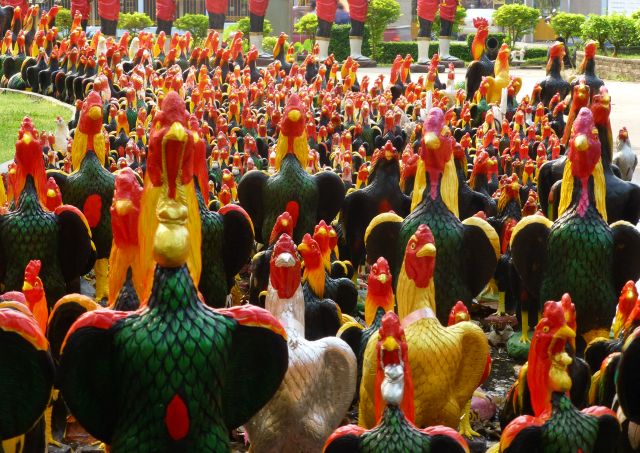 The roosters are coming at Tak.
Thursday 28 March - A few hours in Myanmar
Cooler night and we actually had to drag out a blanket. We stopped at a roadside market run by hill tribes. There were some interesting scenes as women waved sticks with plastic bags tied to the ends to keep insects away from hunks of pork. Pork crackling is the specialty. The women were in colourful clothes and many men and women were wearing 3/4 length baggy pants. Very pleasant people and we saw three young boys, probably all less than 13 years old fixing the back wheel of a bike and looking like they knew exactly what they were doing.

We drove to Mae Sot and decided to leave the trucks to walk across the bridge to a small town, Myawaddy in Myanmar for an hour or so. Myanmar seemed similar to Thailand but poorer although the people were just as friendly.
Drove north and found a camp beside a creek where the locals were washing everything from their cars to their teeth. 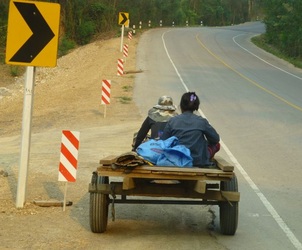 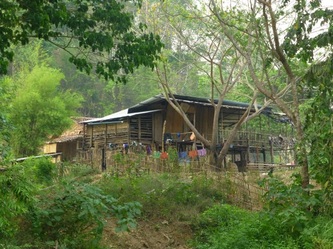 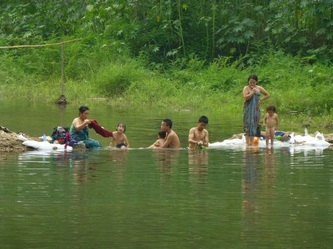 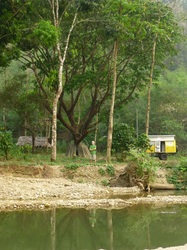 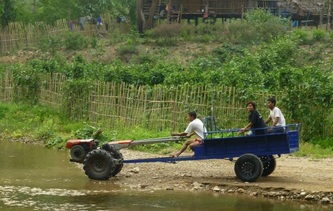 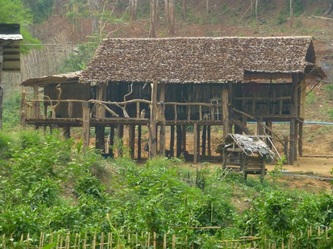 Friday 29 March - Good Friday at home but just another Friday here.
We realized that we had been lucky to camp where we did because as we got further north there were more police checks and a very large and well established refugee camp. No opportunities to stop there. We were always waved through the check points. We were in the Thai - Myanmar border region.
We drove to Mae Sariang and then turned east towards Chiang Mai. We found a very pleasant campsite in an arboretum in the highlands. We parked the trucks and went about making sure it was okay to camp. So far we have always been welcomed with a smile and a nod to camp at the sites we choose. Another cooler night, down to about 22C.
30 and 31 March
We drive down into Chiang Mai mid morning with heaps of traffic and still smokey. We checked out possible campsites and drive up the mountain overlooking smokey Chiang Mai. As it is quite a large place we decide to stay in a B&B in the moat enclosed, narrow streets of the old town. It is easier than driving into the centre every day. And who doesn't like a bit of aircon, free wifi, a nicely appointed bedroom, somewhere nearby to park your truck  and breakfast for $60/night.
We spend time in Chiang Mai looking at the many wats (temples) and a visit to a hospital for Guy to have a small incision on his head. He's fine and we have to ring for results in a week. Interesting ride to the hospital in a tuk tuk and return in a local 'bus' which is a ute with a covered back under which there is a bench seat down both sides. Probably room for
Excellent night markets on Sunday evening. There was an incredible amount of good quality, interesting and well priced handicrafts including clothes, jewellery, trinkets, hats, shoes, as well as very tasty and interesting food including barbecued octopus tentacles and roasted giant water beetles. There were also some interesting local and hill tribe people selling various local goods, busking, drawing and offering massages. It was a popular place.
1 and 2 April
Enjoying Chang Mai. 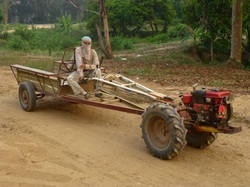 Masked man on his improvised tractor.
Wednesday 3 April
We leave Chiang Mai southbound toward Sukhothai passing an elephant conservation park. The elephants seem to be well cared for at the park but they are stabled and tethered, unable to wander free unless with their mahout. We did see some free in a cordoned off section of the park which was the 'Royal Stable'.
The area is still smokey. There was a failed wet season last year so it is very dry and the locals like to burn off small plots at this time of year.
We drove through a national park shared by locals and plantations and pulled up next to a stream for the night. A couple of local families were cooling off there.
Unfortunately it was still 34C when we could move no longer and went to bed just before 8pm. Just rolling over on the warm sheet is a chore as I lift my sticky body up to turn over. The temperature dropped to 25C just before dawn but there has been nights when it doesn't go below 30C. I think this trip should have been started a couple of months earlier.
Friday 5 April   My last official day at ASA
We did a bit of driving today down to Thung Salaeng Luang National Park stopping at a waterfall on the way. As it is approaching the end of the dry season most of the waterfalls and streams are barely flowing.
Our campsite in the park was beside a stream with no one else around.

Having a toast to my retirement with ASA. Rob actually found some Chandon for the occasion..
Saturday 6 April
We decided to go toward the Khao Yai National Park, taking 2 days to get there. We thought it might be nice to stay near a lake and so went over the bridge which just went over rather dry paddy fields. We turned south and found water further down. There was even a drowned bridge... so it was a dam! Camped next to the water. Very warm breeze and 36C but it did cool to 30C by midnight and when the breeze stopped our sandfly mesh on the windows was not small enough to stop the superfine gnats! Nice setting but not a particularly good night. 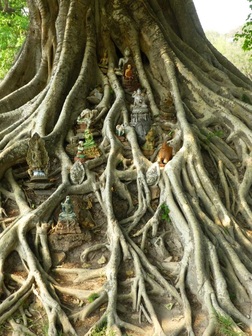 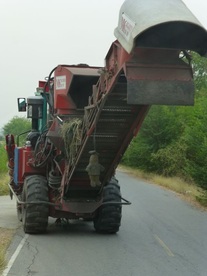 Bananas in Pyjamas hanging from a cane harvester in Thailand?
Sunday 7 April
We drove through cane fields to meet Jon and Jude for morning tea and then on to Khao Yai National Park north east of Bangkok.

Great campsite with Sambar wandering around. We also saw white handed gibbon in the forest behind the information centre and lots of fresh elephant dung on the road in the park.

Monday 8 April
We met a lovely Thai couple who invited us to see the waterfalls and lookouts in the park with them. Although English was difficult for them and our Thai is non existent we had an enjoyable time. 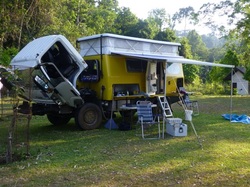 Wednesday 10 April
We leave Khao Yai National Park for Pang Sida National park which is closer to the Cambodian border.

Last night in Thailand for a week or so. Next stop Cambodia.