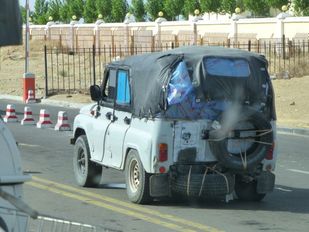 Loaded up with cheap Chinese goods to take back to Mongolia.
29 June 2013
Crossing the Chinese Mongolian border was an experience. Mongolians come over to buy cheap Chinese goods. They absolutely stuff the jeeps to overflowing. Doors are unable to close and passengers are hanging out. But they don't have roof racks or anything on the outside because this will cause an inspection from customs. Although I saw one jeep get through with a huge roll slung under it. To make matters worse the vehicles are in a poor state. We saw one car being towed and another had such a flat back tyre that it was driving on the rim.
On the human side, people were pushing and shoving with arms coming over the top to get to the customs counter. Absolute chaos with no signs in any language. Just copy everyone else. Not a good introduction to Mongolia.
Through the check gate and we drove on a sealed road a few kms to the town. The jeeps just seemed to vanish.
Got tugriks from the ATM and a phone card but it wasn't over. Two people had driven up from Customs looking for the trucks. There was just one more form to be completed!
We ate and then drove in the dark to the edge of town where the road ended and multiple sand tracks started. Picked one, drove a little and camped in the dark, exhausted. 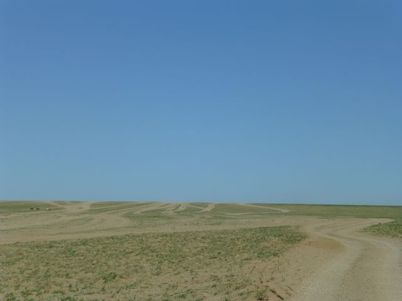 Now which track?
30 June
A few trucks had rumbled either side of us during the night. We had been told there would be lots of tracks going everywhere. It's true.
On a track and we saw our first ger, camels and horses and lots of wide open spaces. No camping in carparks here.The road was tracks until about 60 kms before Saynshand when there was bitumen. But when we turned west at Saynshand it was back to the tracks and scenes reminiscent of those in the outback of home except for the bactrian camels, horses, gers and flocks of goats and sheep. 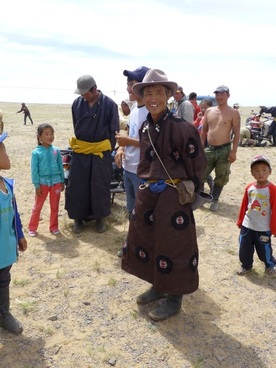 Mongul guy at horse riding school.
1, 2 and 3 July
Set off into the Gobi Desert and in the middle of nowhere we came across what looked like a children's horse riding school. Boys were slowly riding around the camp and singing while the girls watched on. After a while the families started to disappear off in different directions into the desert.
This is also where Miles discovered he had a broken spring. So we drove into Mandakh where a very rough and makeshift repair was done.
Over the next 3 days we passed through a few small desert villages and took a couple of wrong turns before arriving in Dalanzadgad. We resupplied with water, fuel and some groceries while Miles had a better spring put on.
4, 5 July
We went to Yolyn Am Canyon which is a very picturesque National Park in the desert where we found small sheets of ice next to protected north facing cliffs even though it was summer. Lots of small burrowing animals called pikas and other meerkat looking long tailed ground squirrels.

6 July
Drove north through an old monastery area, Ongiin Khiid, which once supported over 1000 monks but was destroyed when the communists came through in 1939 and killed over 200 monks.  The Communists then proceeded to divert the course of the river for a mine. A few monks have started to resettle and rebuild there. 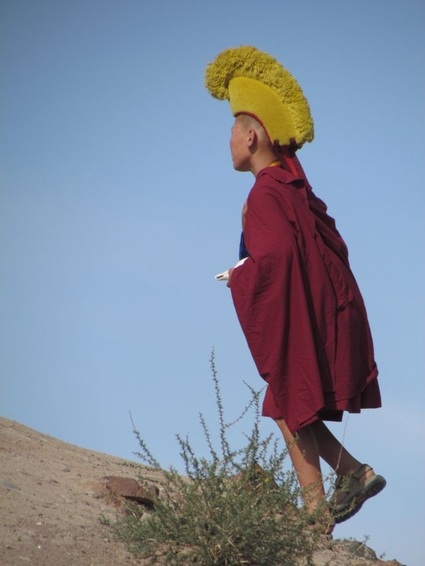 Photo of young monk at Ongiin Khiid. Photo taken by Marina.
7 July
We headed north out of the Gobi and into the greener area of the central Mongolian steppes and Karakorum, Genghis (Chinggis) Khan's old stamping ground. On the way a Mongolian boy flagged us down. They were moving house...er ...ger and their loaded up truck and trailer were bogged in a nearby field.
Guy and Bee did an excellent job and got them out pretty easily.
The show was surprisingly good and included male throat singing and a kind of high pitched wailing from a woman. The instrumentalists were very good and the traditional dress topped it off. 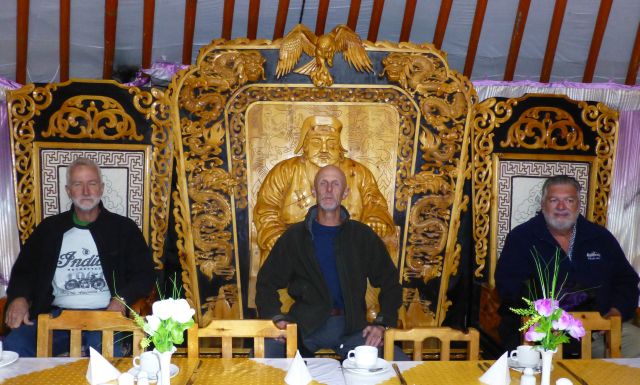 Guy, Miles and Rob at dinner.
8 July
Best of all we happened to be in Karakorum for the regional Naadam festival. We saw the opening ceremony which included the opening parade, singing, dancing, music, acrobats and juggling. Then the  manly sports of Mongolia: Mongolian wrestling, archery and cross country horse riding. The tradition with the wrestling was interesting and the cross country was also interesting in that the riders are between 8 and 13 and usually male. The emphasis is on the horse's ability in the cross country and the length of the race is dependent on the age of the horse. Some boys were even bareback and many without helmets.

Monastery walls of Karakorum.
9 July
we visited an excellent museum in Karakorum, built with co-operation from the Japanese. We read about a different side of Genghis Khan to what I learnt at school. Apparently he did a lot towards religious freedom for his subjects, abolished torture, encouraged trade and created the first international postal system as well as murder!
Checked out the monastery and once again there were many ruins although there are some temples in use inside the monastery walls.
Started the drive to the capital, Ulaan Baatar about 360 kms to the east. Two days of driving on the potholed, broken bitumen roads with slow trucks and lots of oncoming traffic as everyone leaves town for the Naadam holiday season. 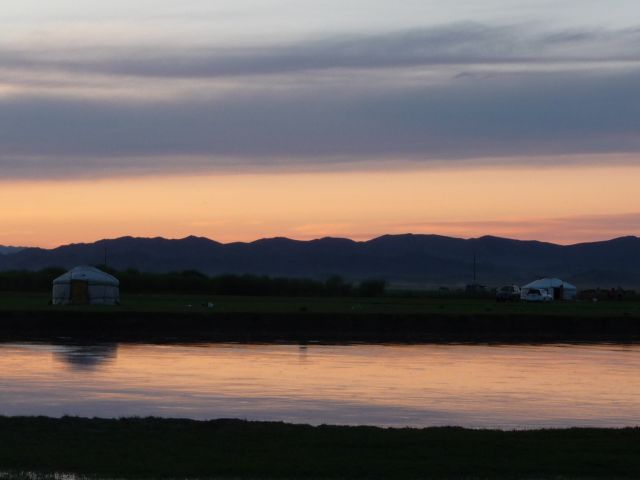 View from the campsite on our way to UB (Ulaan Baatar)
10 July
About 40 kms from Ulaan Baatar we stumbled across the site for the national Naadam horseriding competition which is a cross country event. We had seen the start of a race with more than 100 horses and their riders being paced by several 4WD vehicles a few kilometres earlier. The road to Ulaan Baatar was blocked and so we had to turn in. So glad we did as we saw the end of the race.
11, 12 July
Naadam in Ulaan Baatar is a 3 day festival. We saw some wrestling and archery events at the stadium in Ulaan Baatar. More professional but just as colourful as the regional one we had seen. 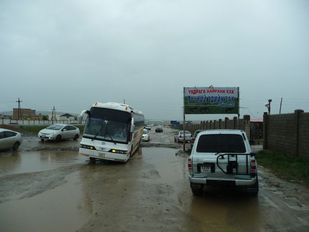 Mongolian roads are terrible.
13 July
The weather was miserable and so we decided to escape UB to see the statue of Genghis Khan and a National Park to the north east. The roads were terrible. Busy and so potholed that most vehicles escaped to the self made multilaned dirt highway on either side. Very tiring driving. We saw our first grader but his blade was up! 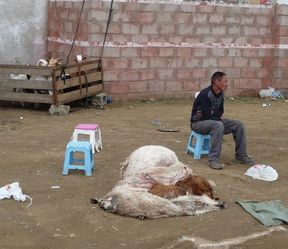 Selling sheep and goat skins on the roadside.
14 July
The weather cleared up on Sunday. Holidaymakers were out horseriding, bike riding and walking around as the long weekend came to an end.
The roads were a lot better. Many people selling kurshurs and goat and lamb skins to the holiday traffic on the roadside.
We ate out on our return to UB and enjoyed a folk band with traditional instruments and throat singing.
15 July
The trucks went in for a service and I had a look around central UB at the National Museum, Sukhbaatar Square and some shopping. We leave tomorrow for the Lake Baikal in Russia. 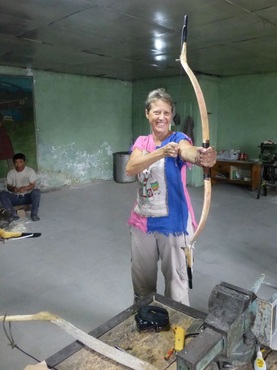 Watch out...woops, no arrows. Photo by Robyn
16, 17 July
We left the capital for the drive north to the Russian border and Lake Baikal after which we return to Mongolia to see the north western area.
On the way north we detoured to a bow and arrow making place in Dulaankhaan. They use two separate pieces of laminated ibex horn which are joined by some light timber for the hand grip which is then bound by ibex tendon. He told us there is no problem getting ibex horn. It is a few hundred dollars for a bow and 4 arrows. 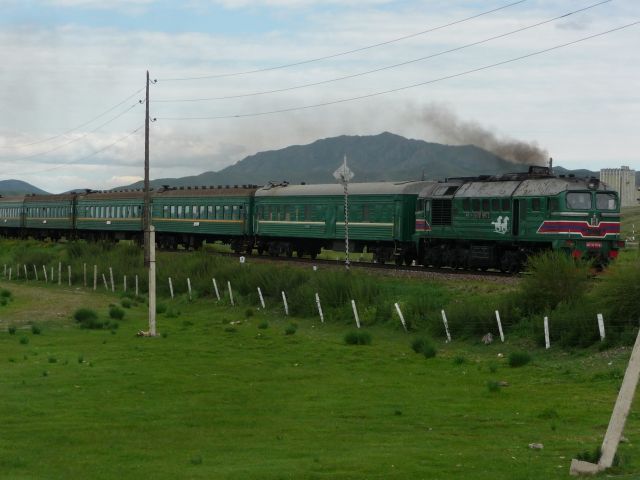 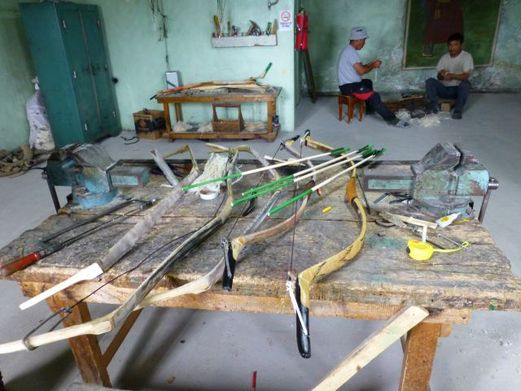 One of only 3 bow and arrow making places in Mongolia. Archery is one of the main disciplines in Naadam.