2 November 2019
It was a couple of hours to cross the border, maybe because it was a weekend. We were reminded of the many refugees fleeing Venezuela through Colombia and Ecuador by the presence of the UNHCR and other aid agencies at the border.
It was also the Día de los Difuntos, or Day of the Deceased - remembering those who have passed on. So a celebration at the cemetery where a homemade, sweet, dark red coloured drink made of blue corn flour and red berries called colada morada is drunk and a bread called guaguas de pan is eaten as well as placed on the graves at the cemetery. 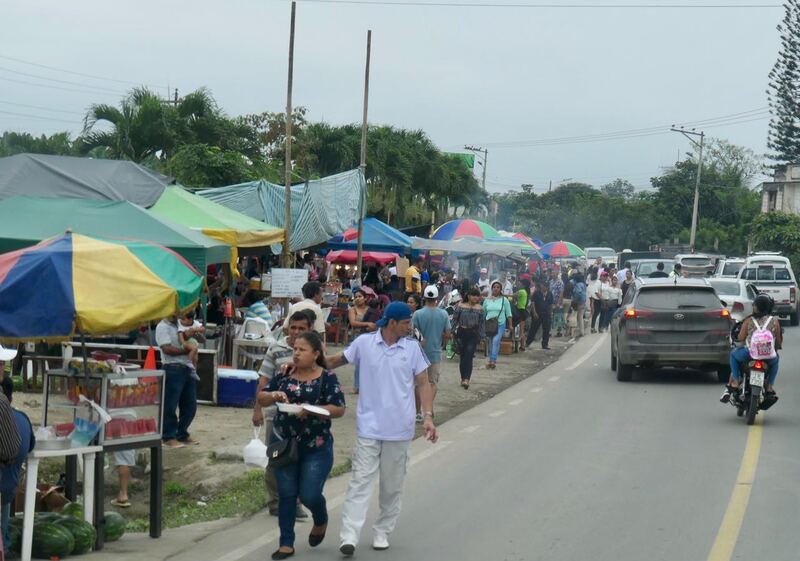 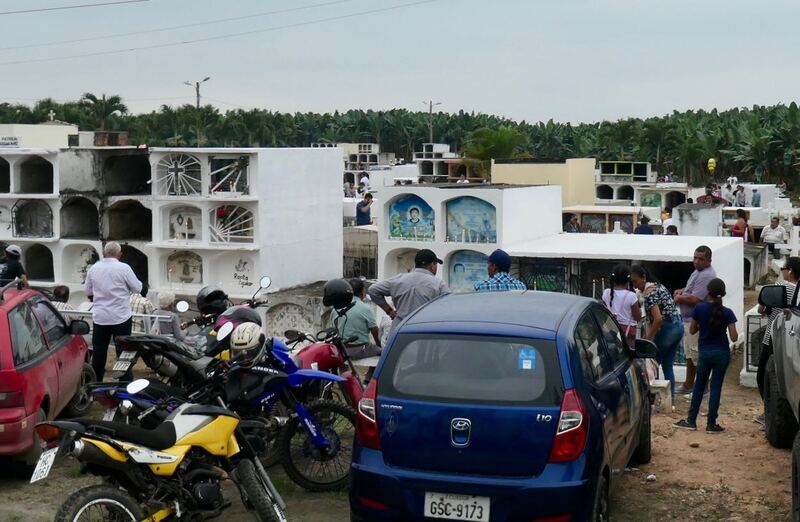 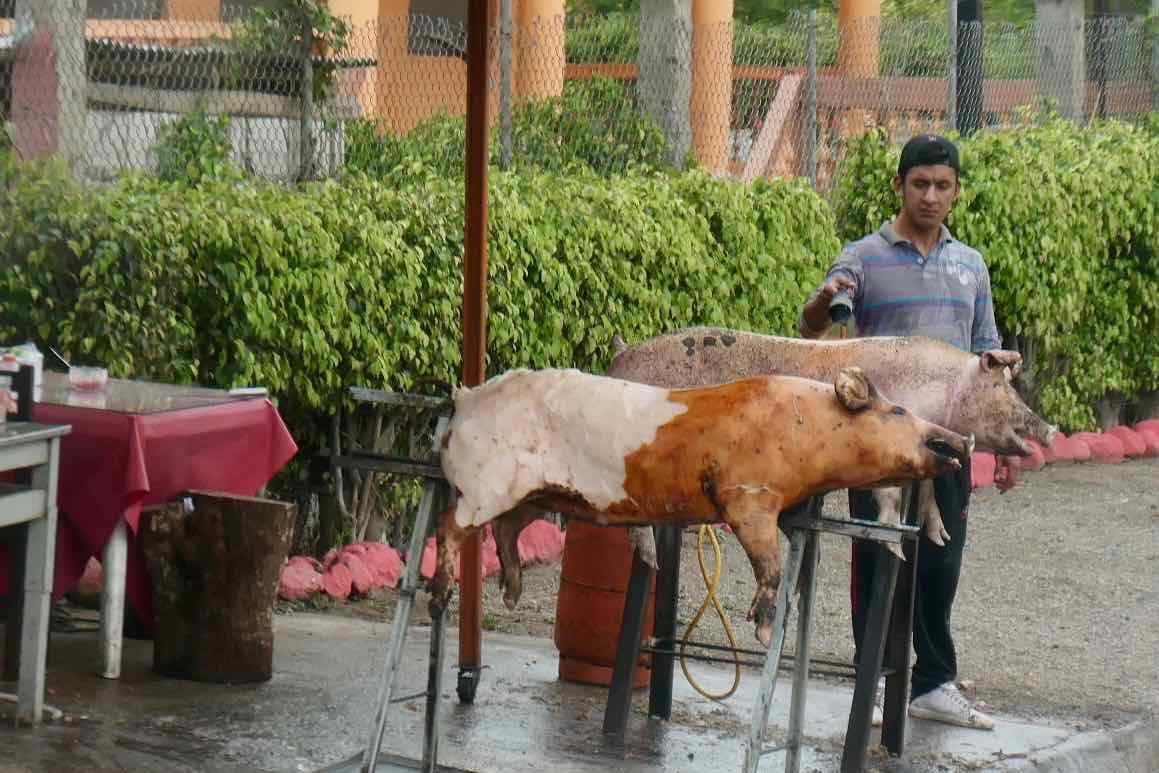 3, 4 November             Cuenca
Neither of us felt too well yesterday but hopefully getting better now.
We have a campsite close to the centre of Cuenca where it is a festival long weekend to celebrate Día de los Difuntos and the Independence of Cuenca. Celebrations included concerts and many food stalls and good quality handicraft stalls down by the Tomebambo River.
​The city has been declared a UNESCO World Heritage Site due to its many historical buildings with quite a few churches.
5 - 8 November
From Cuenca we drove north to Quito.
We were fortunate to catch up with Lucy and Wombat once again. (www.tanglesandtail.com). This time we met west of Riobamba near Chimborazo, the highest peak in Ecuador at 6259 metres. We managed to get a few glimpses of the volcano as we drove north but the next day it was totally in cloud. 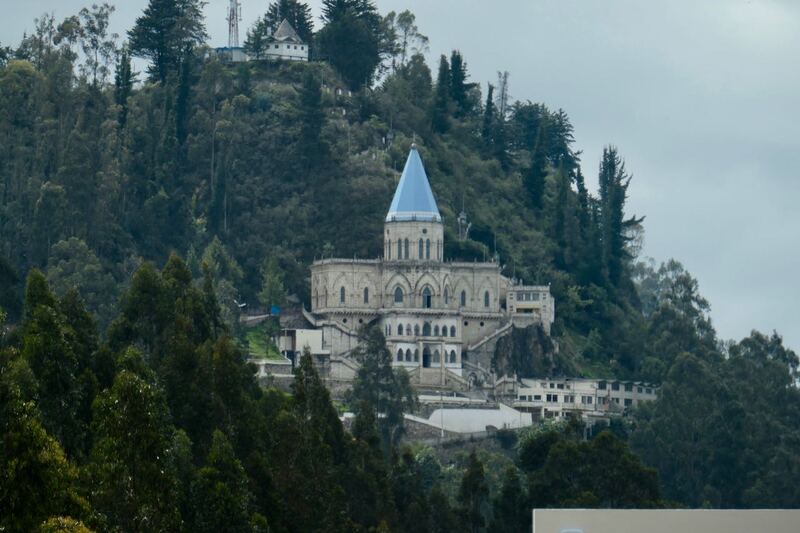 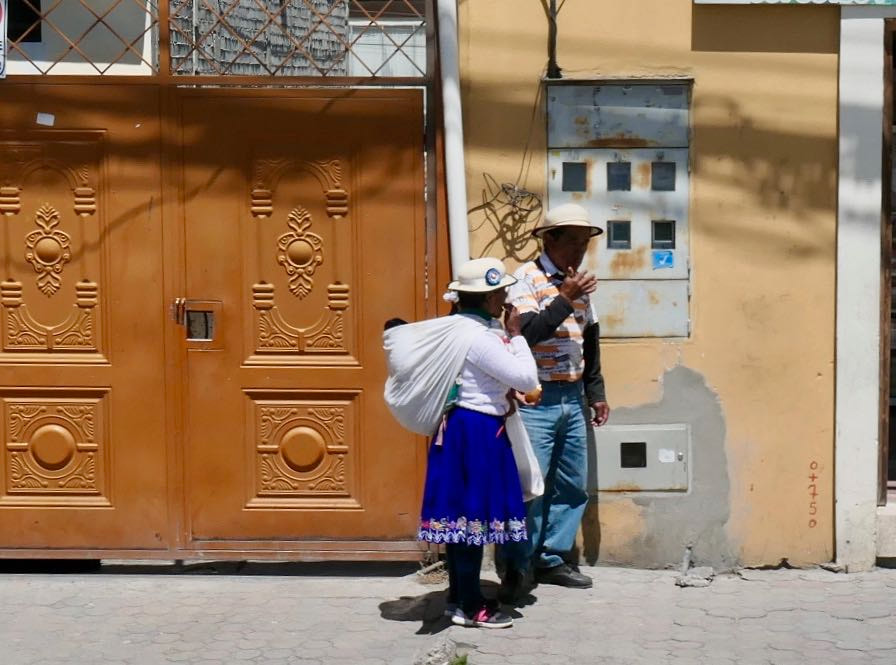 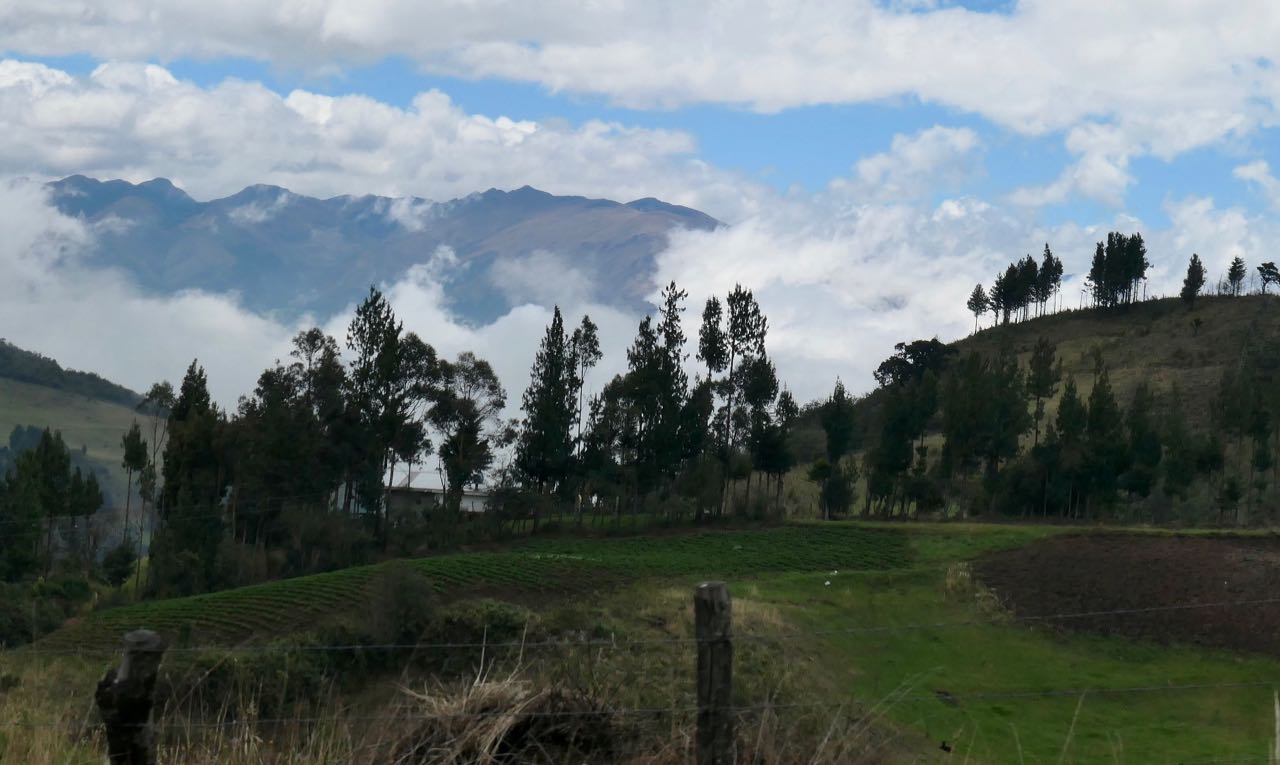 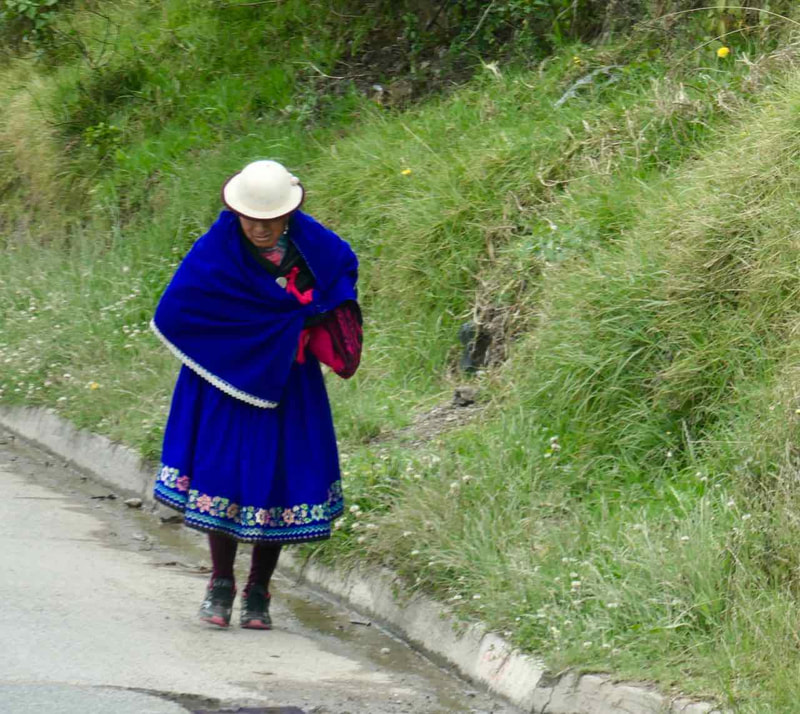 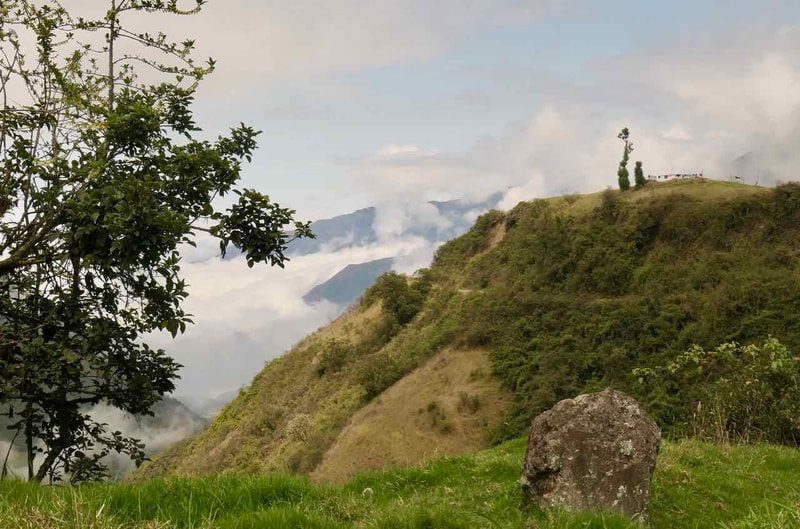 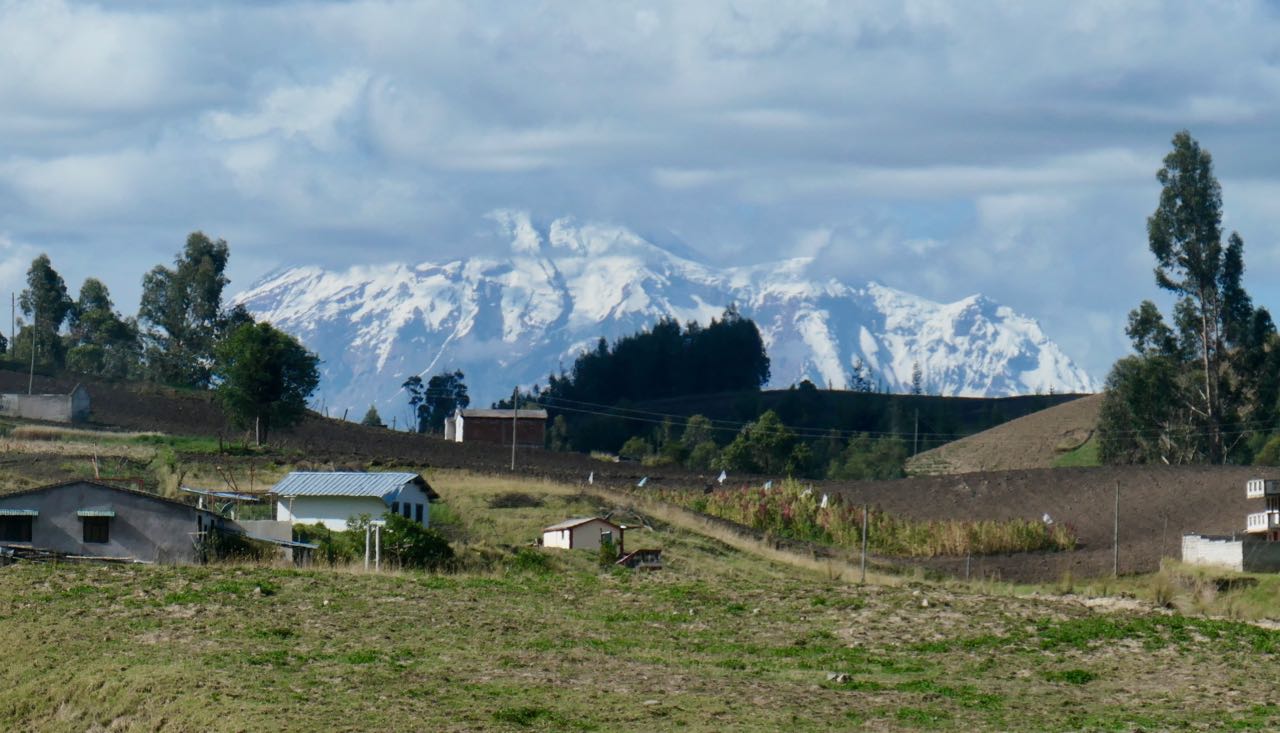 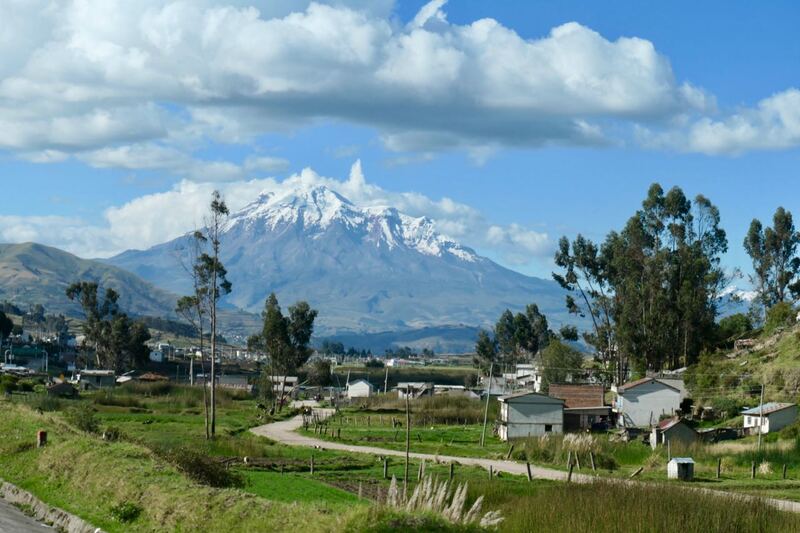 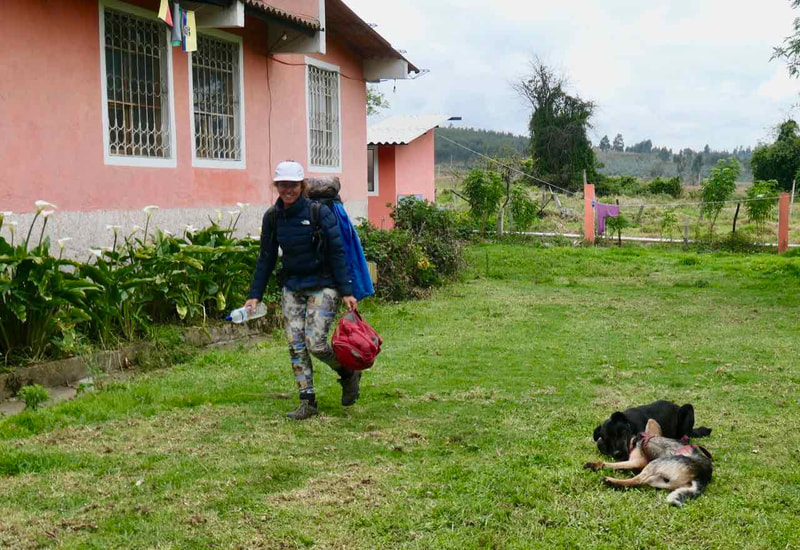 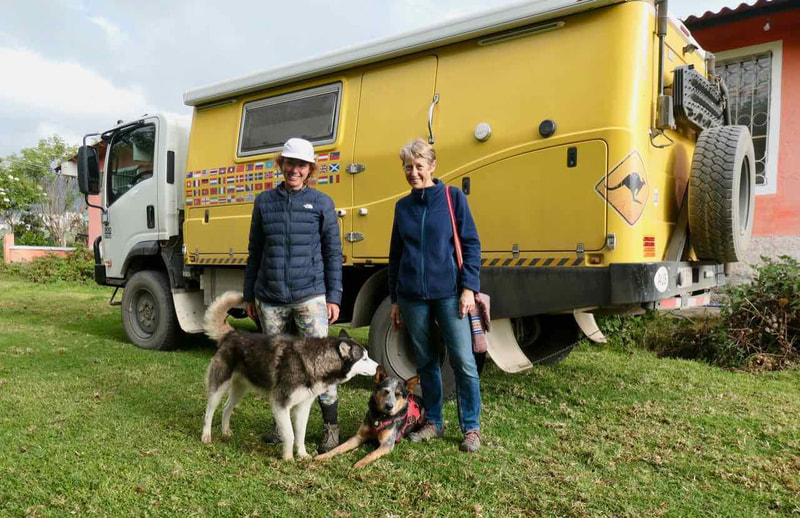 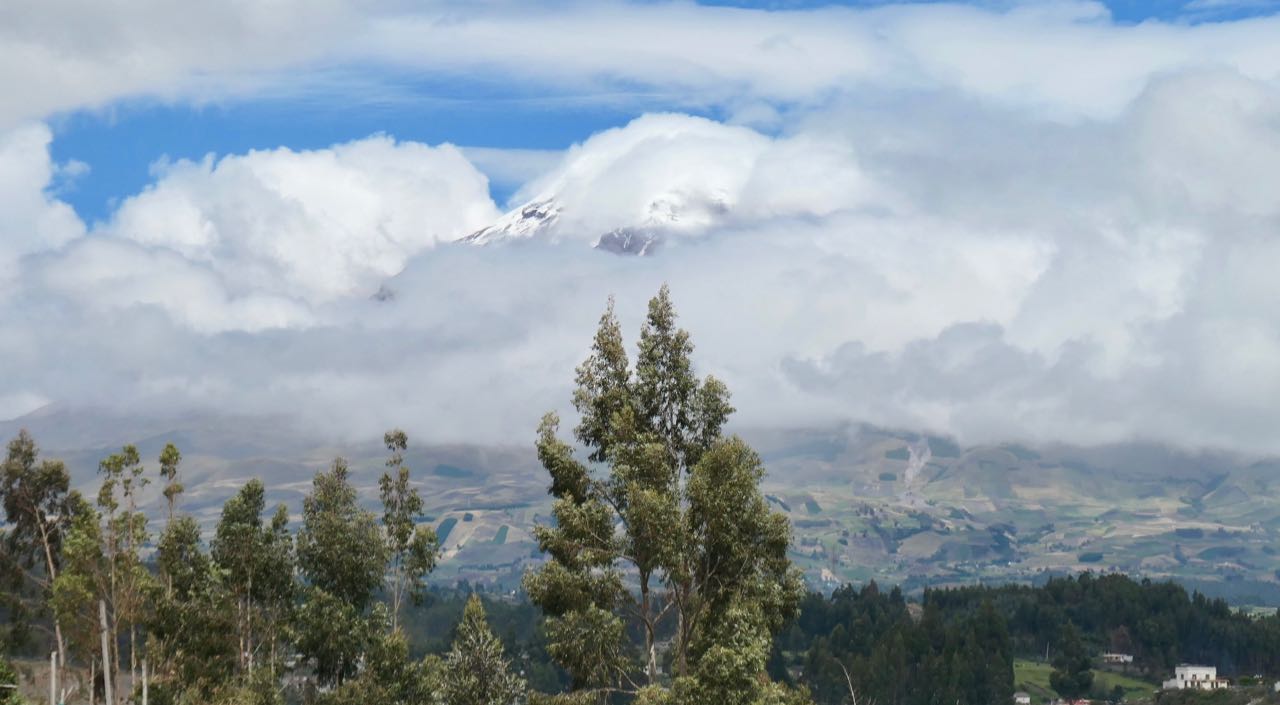 Chimboazo, the highest peak in the world when measured from the centre of the earth.
From 8 -16 November we had 9 days in Guyana. It is the next country listed at the end of this page on Peru.

17, 18 November
From Quito we ventured east to Papallacta Hot Springs. There were several different places to choose from and the one we chose had several pools at varying temperatures. Small cold pools were available next to the hot pools. Although it was a weekend and many people came up from Quito, the pools were large and numerous enough for it not feel crowded. Very enjoyable in the cooller weather.
19 - 23 November
The warm coast to the west was next. Unlike Peru, Ecuador is beyond the reach of the cold Humboldt current and so the ocean is warm.
We stayed a couple of days in Canóa with its surf schools, many beach bars and eateries and relaxed vibe. It is not peak season yet so the place was quiet. 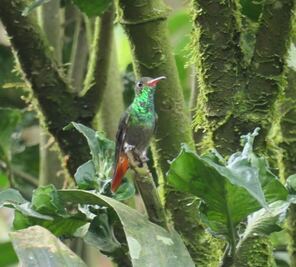 The fluorescent shimmer of the hummingbird is only seen at certain angles in the light.
24 - 26 November         Mindo
As we travelled inland from the dry coastal forest we slowly climbed to 4000ft/1265m and the lush tropical forest area of Mindo. Only a couple of hours from Quito and quite busy on weekends the interesting little town offers many different adventure sports, birdwatching, hiking, a butterfly house and comfortable accommodation.
We visited a hostal which has beautiful gardens and attracts hummingbirds with itsl flowers and feeders. The feeders are positioned in front of a veranda with reference books, binoculars and coffee on tap. We observed many different types of hummingbirds there.

​Another adventure in Mindo was a night walk through the forest led by a qualified english speaking guide. We saw some interesting things - small black and white striped graceful snail sucker snake, a couple of plain small frogs, a kikaju, spiders, spikey black stick insect, an interesting whip scorpion and a type of spider that glows under UV light.
​The tailless whip scorpion is neither a scorpion or a spider. it is a form of arachnid that walks on six legs and the front two which are three to four times longer than the other six legs are sensory antennae-like legs called antenniform legs. They constantly sweep the air to detect sound, smell and taste as well as to feel. 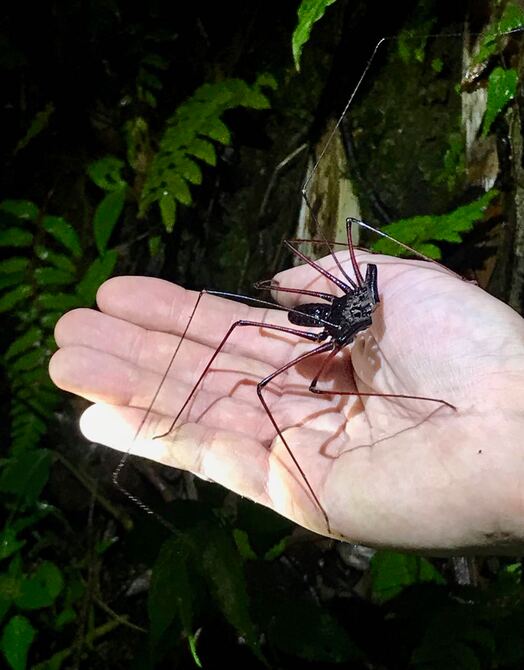 I couldn't crop this photo any further without cutting off the huge front legs of this tailless whip scorpion stretching to the top and bottom of this image. 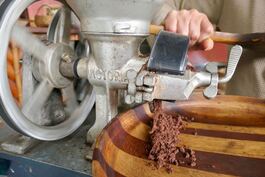 After cooking and shelling the beans it is into the grinder and a gleaming chocolate comes out.
A few coffee and chocolate making tours on offer in town. I tried the Cacao Mindo Artisanal Tour which was led by a passionate chocolate maker. We walked through and he explained the process from the various types of cacao tree/bushes grown through the natural drying process, the cooking, shelling and grounding of the beans to our tasting. Beautiful chocolate. A beautiful by product is the coating from around the fresh beans which is a bit like lychee in colour and texture but not as sweet. It is made into liquer or a sauce.
We did an early morning bird walk through the rainforest with a guide. I managed to get some interesting photos on the iphone looking into the guides telescope. We saw some interesting flowers and birds including egrets, tanagers, hummingbirds, flycatchers, motmot, toucan and quetzals. 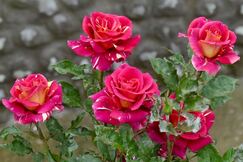 27 - 30 November, 1 December                       Otavalo to the border
​From Mindo we drove through Mitad del Mundo (Middle of the World) and into the Pichincha region which grows the biggest roses in the world. Ecuador is the largest flower exporter after tne Netherlands and Colombia. Finally we arrived in Otavalo with a campsite overlooking this town famous for its craft market.
Also overlooking Otavalo is Condor Park, a rescue and care centre for birds of prey.
The handcrafted felt hats of Ilumán are well known for their finish. Most artisans make the hats in there homes but we were fortunate to find a shopfront where they were making the hats out the back. The hats start from around US$10 (AU$15) and they even have hats for children. Local markets and stores sell them. 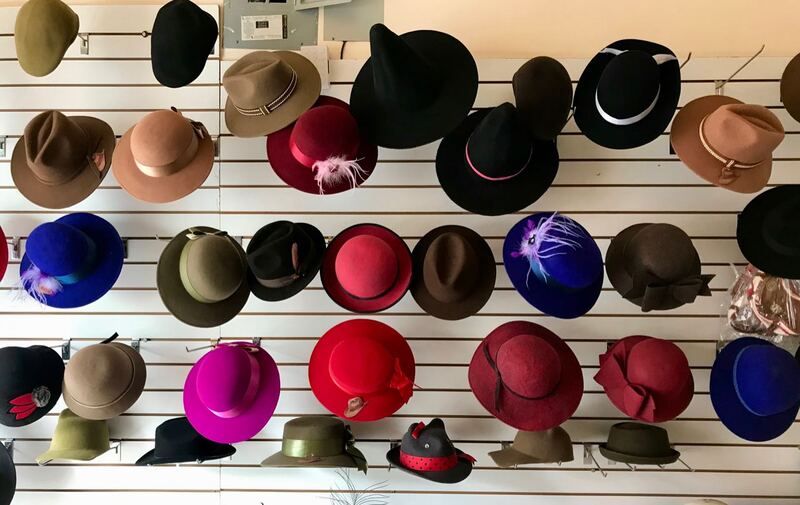 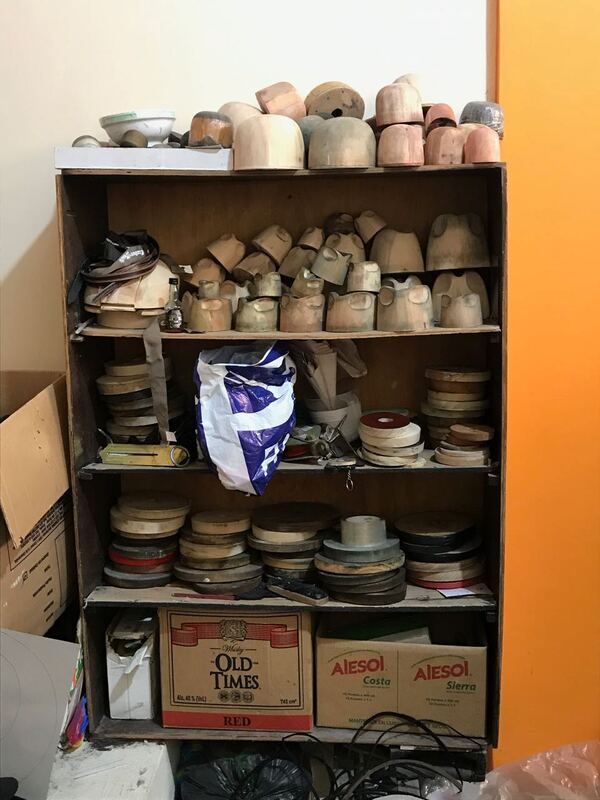 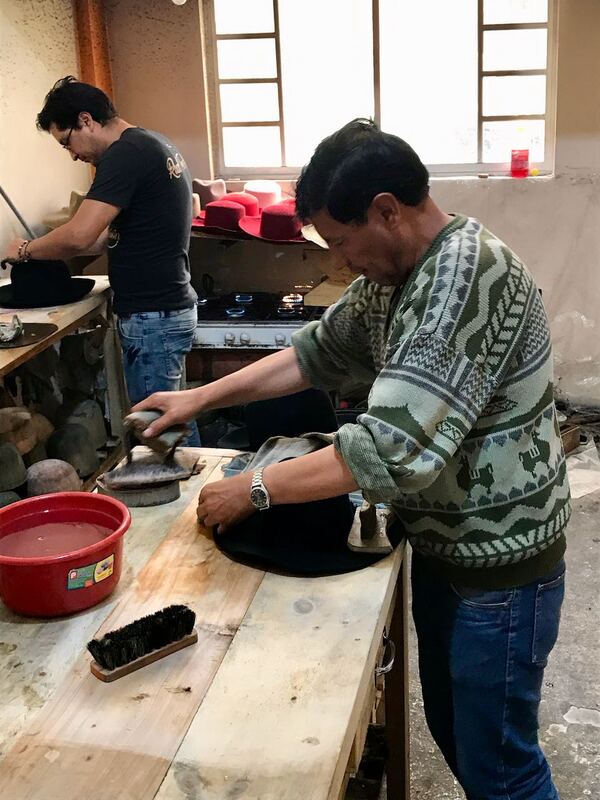 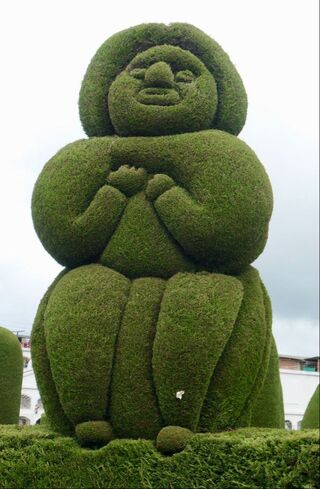 ​A few days resting and catching up near Ibarra. The weather was mostly fine and warm even though the wet season has started.

After the comforts of a nice campsite it was on to the bordertown of Tulcán with its amazimg cemetery. We did not really know what to expect but once we were there we were blown away by the incredible topiaries. The sculpting began in 1936 when gardener Josè Franco began sculpting the tall hedges in the cemetery. Although he has passed on and is buried in the cemetery the tradition has continued. The topiaries include animals, birds, Incan symbols and bulbous figures. Some symbols to sit on top of hedges and others on the ground. 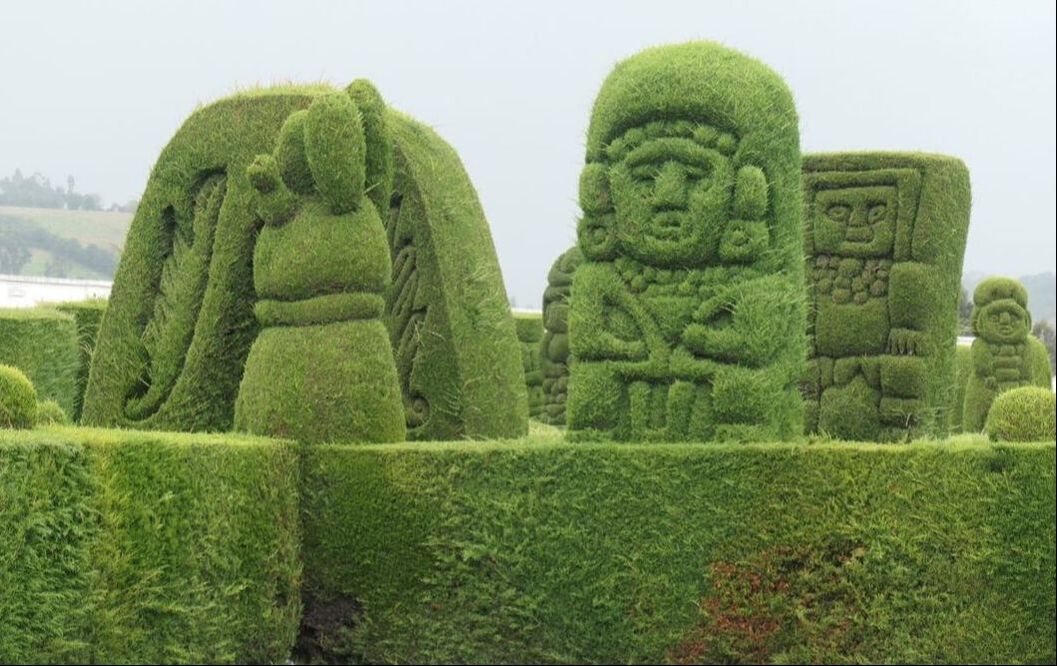 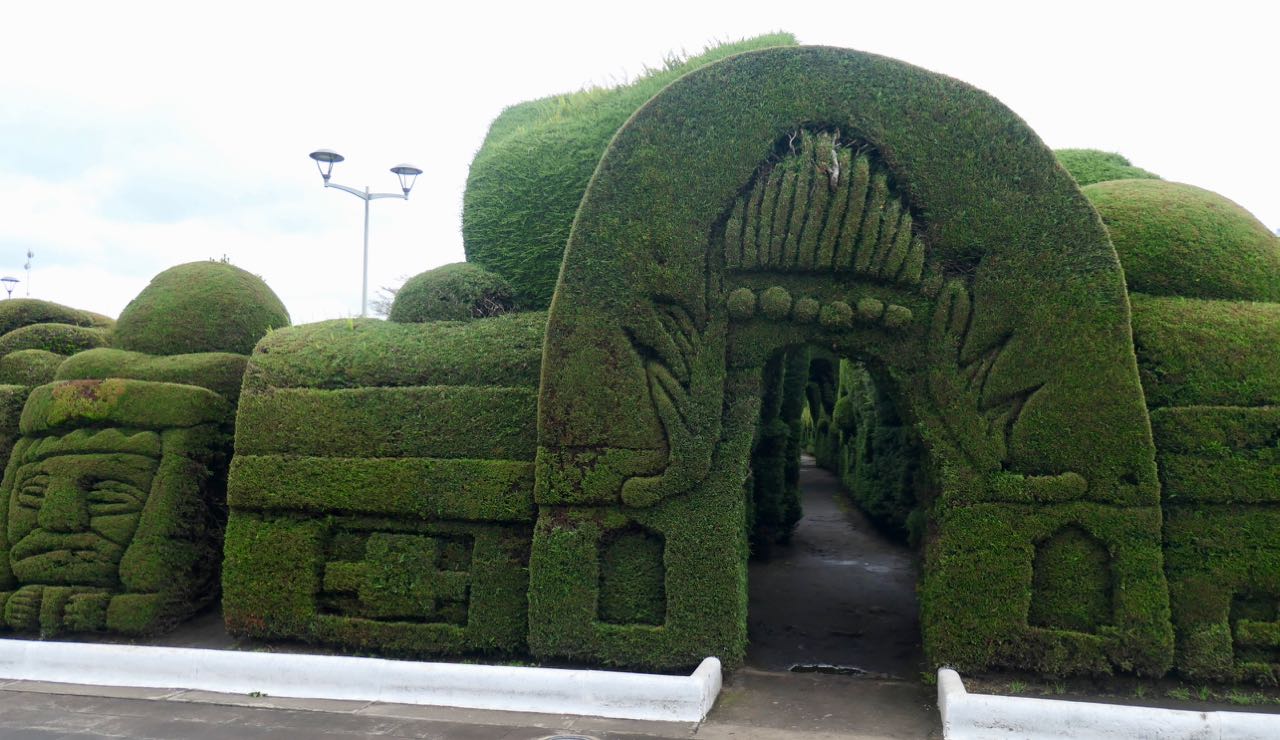 From 8 -16 November we had 9 days in Guyana. It is the next country listed then we continue to Colombia.