Russia/Kazakhstan border. Thankfully we were not left lounging in the grass for hours like these bus passengers.
17 August 2013
The crossing into Kazakhstan was one of the quicker border crossings even though locals once again pushed in front. There were 11 people in a van and as long as one of them is in the line in front of us, the whole vanload will push in to be processed together. Very annoying. 40 people (2 van loads) pushed in front of us like this coming into Russia. As a result we took 7 hours to cross that border. We are wisening up to this. Their thinking is also that they do not need to queue as they are more important. 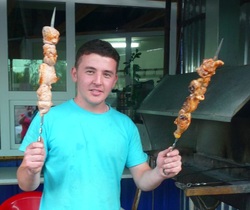 Shashlik....yum!
First impressions of Kazakhstan were that the place is flat grassland, the roads are straight and potholed, powerlines and trainlines travel direct to the power stations in the middle of nowhere. For dinner, we had shashlik at a local beer tent outside a shopping centre. More shashlik stands at home would be good - a change from sausage sizzles! 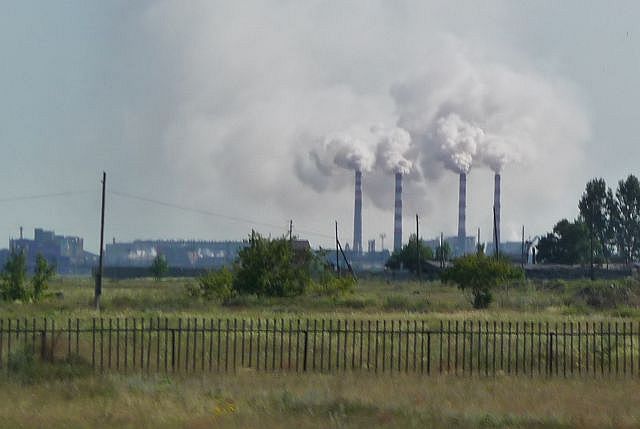 We listened to coal trains for the first night as they supplied a nearby power station. 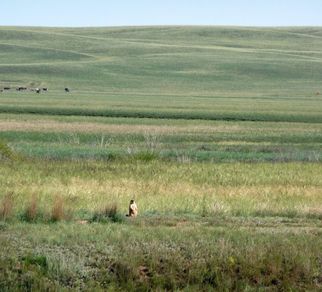 A marmot looking around as we watched.
18, 19 August
As the roads were potholed and uneven in places we tended to get a little speed up but then had to slow right down. Very draining.
Most villages consisted of houses with the vege patches covering 10 times the floorspace of their house.
Saw a marmot perched on a rise looking around. Very cute.

We had heard that the president who lives in Astana likes clean things, especially vehicles. So as not to attract attention we gave the truck a quick wash before leaving our last campsite prior to Astana. Saw quite a few car and truck washes on our way in too.

Tiny houses and their vege patches.
20 August
Astana - Kazakh for capital. We had driven about 700 kms over the last few days and so we had a couple of days off in Astana which has only been the capital for just over 10 years. Previously it was a provincial town. It is growing a little like Dubai.               . 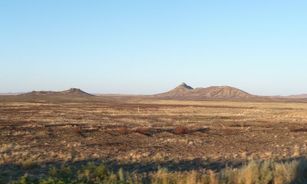 Typical countryside as we travel south.
21, 22 August
Time to leave Astana and on a whim we headed to Almaty, 1200 kms away. Fortunately the roads were better than the roads we had come in on and we covered the distance in less than 48 hours. Many police out and we were stopped 3 times: once to be told that window tint is not allowed on the front windows. (When the policeman couldn't peel it off - baked on by good Australian sun - we were told to drive with our windows down) then stopped to check our lights were on high beam, as they must be all the time here and then the costly but no receipt or paperwork for speeding, so the camera said. Normally the truck has trouble speeding! 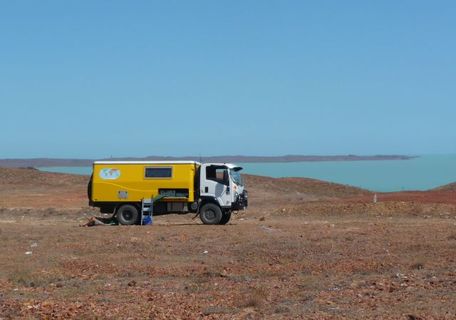 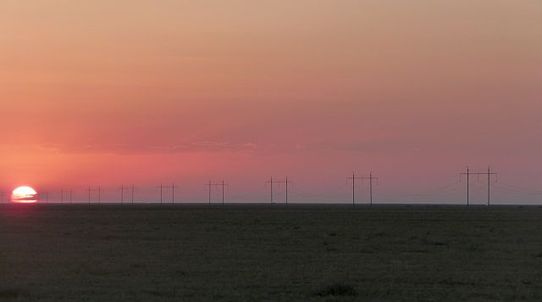 Power lines, almost a trade mark of Kazakhstan, in the sunset.
23, 24 August
Almaty, an expensive, cosmopolitan city where many rich and powerful people live, as well as an extra in a dark corner of the house of the truck. A small bat! Guy Attenborough carefully grabbed it and took it outside where it bashed into a nearby building a few times before finding the trees. 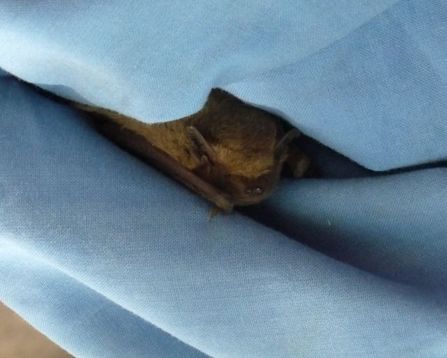 Only small but curious to think how and when it got. Guy reckons it brushed his arm during the night.....
There are beautiful snowcapped mountains to the south and we headed towards them and the Tian Shan Observatory for a night.
25, 26 August
We left Almaty and met up with Jon and Jude for the night.
In the morning we drove up to see 3000 year old petroglyphs where we were given a tour by a Kazakh speaking archaeologist. A bit hard to learn a lot but we were lucky to see some restorers at work and one of them translated for us. 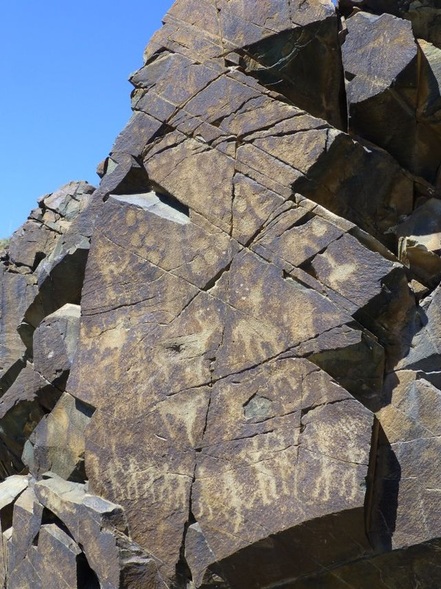 Very old and interesting carving of sun headed body and people dancing below.
We were very close to Kyrgyzstan and they do not require a visa beforehand from Australians, so off we went! But it would mean less time in Russia.