Thursday 11 April 2013
Leaving Thailand for Cambodia through Aranyaprathet on the Thai side and arriving in Poipet on the Cambodian side was an experience of patient chaos. The whole process took just less than 2 hours. 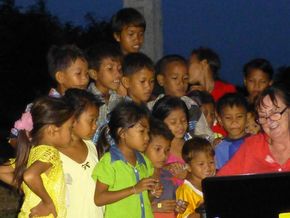 And so began driving a right hand drive vehicle on the right hand side of the road.
We managed to find a camp on a prospective building site off the main road behind some houses. Locals didn't mind and we were the source of much interest from about 20 children. Robyn is a school teacher and was well prepared for the local children, holding their interest for almost an hour - no language required.
Friday 12 April
Not a good night for sleeping. The Khmer New Year is approaching and the locals are getting into the swing of it already. Music stopped at 1100pm which is fine but loud twinkling xylophone music woke us at 4.15am. It continued for 30 minutes when the wailing started and continued for about an hour. Then the xylophone music returned until we left shortly after 7am for the long drive to Phnom Penh.
Only about 320 kms but that's a long way on a lumpy, bumpy narrow road to be shared with bicycles, scooters, motorbikes, carts drawn by people or animals, trucks, buses, over over overloaded vans, tractors, cattle, dogs, tuk tuks and pedestrians all diverting around potholes in a right hand drive vehicle. Add rain to this in the late afternoon!
We made our way to the carpark of a ferry terminal where we were allowed to stay after a 10 hour day.....very tired.

I had to use panorama to capture this from the truck as we were driving along.
Saturday 13 April
A more sombre day as we go to the killing fields memorial. 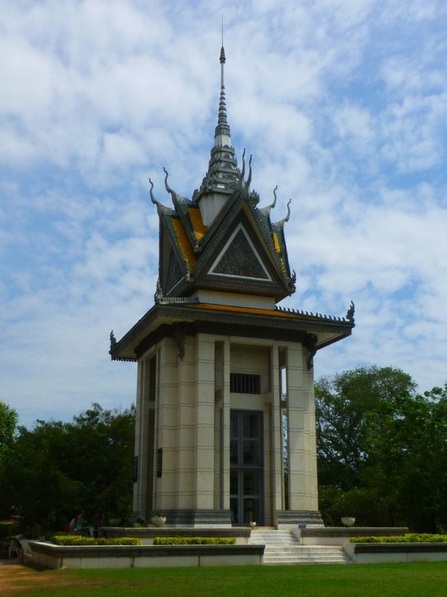 Memorial to those who died at the killing fields
Also saw the Royal Palace before walking back along the bank of the Mekong which we overlook from our campsite....that is beyond the rubbish on the riverbank.

Sunday 14 April - First Day of 3 Day Khmer New Year Holiday
Early morning call from a rooster which sounded like he was sitting outside our window.
We had a pretty lazy day. Most places were closed. We did a relaxing sunset river cruise on the Tonle Sap and Mekong Rivers. 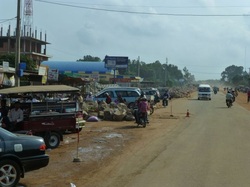 Road out of Phnom Penh
Monday 15 April
The second of the three day public holiday period for the Khmer New Year and the road from Phnom Penh to Siem Reap was much quieter than our trip down.
Many houses had candles and incense burning with offerings of fruit and drinks in their windows and entrances.

We decided on hotel accommodation as there are a lot of people here for the celebrations and the police are moving people like us on when trying to camp.
The photographic record now stands at 6 on a bike! 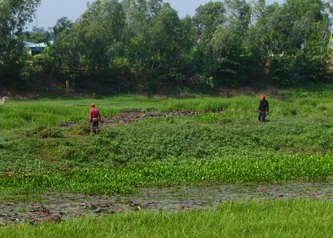 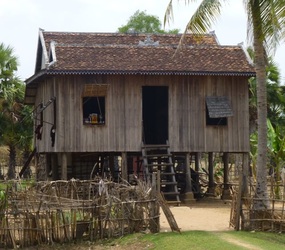 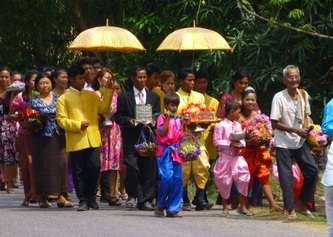 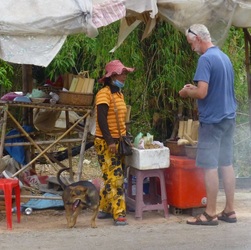 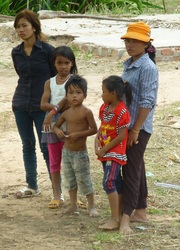 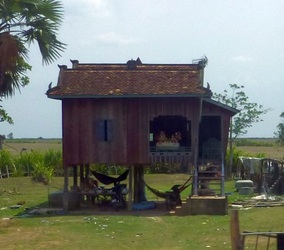 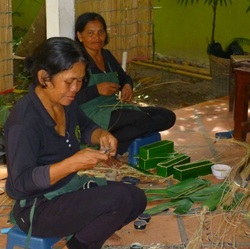 Tuesday 16 April - Last of Khmer New Year holiday
Unfortunately Guy wasn't feeling well so Robyn and I went to a workshop where traditional Cambodian crafts are made. It is run by a Frenchman who employs widows and other women from local tribes who are doing it tough.
After that we couldn't resist party time with the locals at Angkor Wat. We went by tuk tuk and mixed with the thousands of Cambodians enjoying music, food and dance at the stage opposite Angkor Wat. It was massive. There were more stages further north near Angkor Thom as well.
Wednesday 17 and Thursday 18 April
Angkor Wat, Angkor Thom
Friday 19 April
We travel north from Siem Reap to cross the border and transit eastern Thailand to enter Laos. We overnight in Thailand and cross the border into Laos via the Second Thai-Lao Friendship Bridge at Savanakhet.  See Route Phnom Penh to Siem Reap Pt 1 & Pt2.