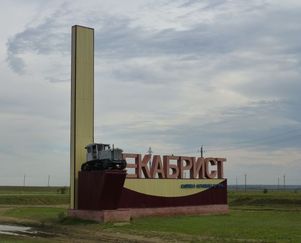 In the middle of a huge grain growing area near the border.
Wednesday 4 September 2013
Back into Russia after crossing at a very quiet border post. We drove a couple of hours before looking for a campsite. Unfortunately there had been some rain and the side roads into the fields were very muddy and slippery. So we opted for the back of a servo.
We had been there about an hour when an old Lada drove up. The boot was opened, the oompa music started, the vodka flowed and 5 women started dancing and singing in the dark at the back of the servo. 10 o'clock came, the music stopped, boot closed and Lada drove off. All gone.
Thursday 5 September
The weather is still overcast and cool although not raining. We drove through massive wheat fields to Saratov and parked near the city. A bit dreary as it started raining but a pleasant place with eating places and coffee shops with wifi. We decide to stay in a hotel for the night.
My Cyrillic is improving and I can now read many signs.

Friday 6 September
On Friday we walked down to the Volga River before driving to Saratov Victory Park, an open air military museum overlooking the city.
The rain started again as we drove the long way out of town and camped about 50 kms south on the road to Volgograd. 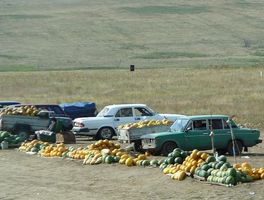 The back seat of the white car is full to the roof with melons.
Saturday 7 September
Easy Saturday drive past the many melon vendors to about 50 kms north of Volgograd. Found a water pump in a village while looking for somewhere to camp. So we filled up as it had been more than 10 days since we last got water.
Camped on the banks of the Volga. 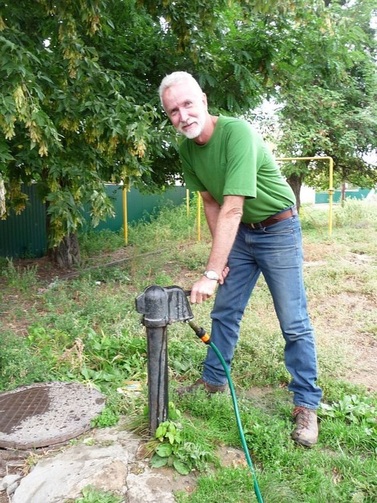 8, 9 September
Sunday in Volgograd is like Sunday in most places with crowded markets and traffic around them. But we drove on to Mamayev Kurgan. This hill saw heavy fighting against the Germans during WWII with big losses on both sides. The Russians eventually won and so stopped the Germans spreading across Russia.
The memorials included many statues, headstones, an eternal flame with guards and Motherland Calls ('Mother Russia') statue.
After this interesting history lesson we drove west from Volgograd to find a camp somewhere along the Volga-Don Canal.
We found a place near one of the locks and spent 2 nights there. A day for rest and maintenance was greatly needed.
Guy adjusted the brakes and rotated the front wheels. 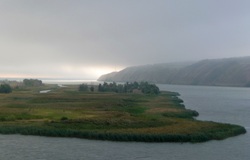 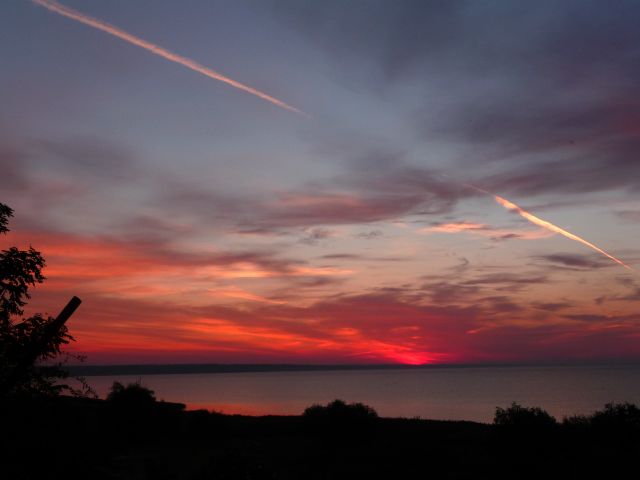 Sunrise over the Black Sea on our last day in Russia.