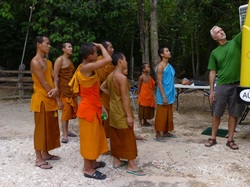 Guy and some of the younger monks at the wat.
Saturday 20 April
After a quick trip transiting Thailand from Cambodia we crossed into Laos at Savanakhet. We went to an ATM to get some Lao kip (8,000 kip = $1.00) and became millionaires in the process. Next was to drive north looking for a campsite as it was almost 5pm. 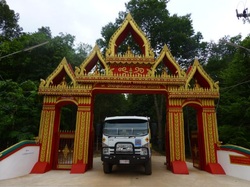 Leaving the wat.
We had heard that others had stayed in wats and we were curious to try also. So when we came across one we drove in and Guy asked the monks if we could stay. They were very welcoming. We offered a bag of rice to one of the older monks. They later offered us soft drinks and crushed ice which was much appreciated in the 37C temperatures. 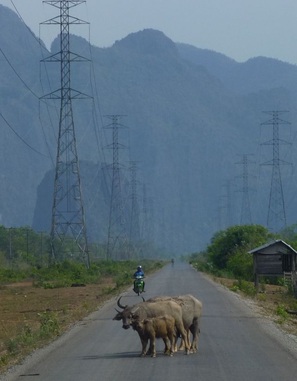 Hydro power lines and water buffalo
Sunday 21 April
We drove north roughly following the Mekong which forms the border with Thailand for almost 200kms. Finally heading east through some quite remote and poor villages dodging water buffalo, ducks, pigs and cattle on the road over the mountains towards Konglor Cave.

Some of the people and scenery along the way is captured below.
Click on the photos to enlarge them. 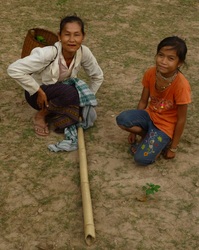 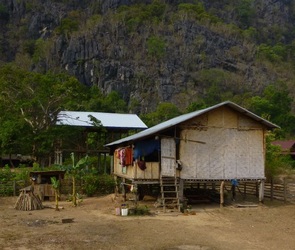 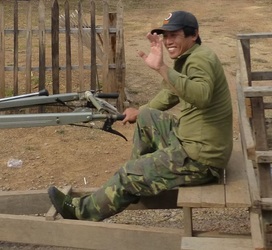 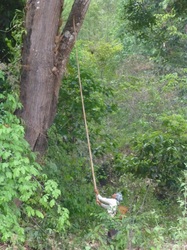 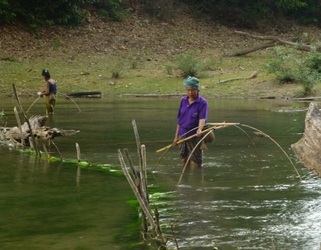 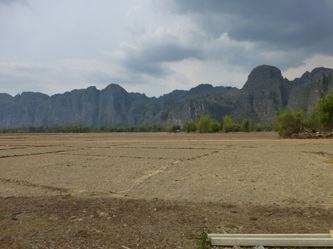 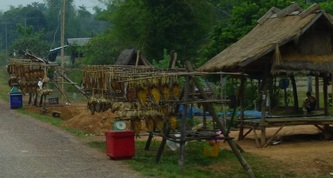 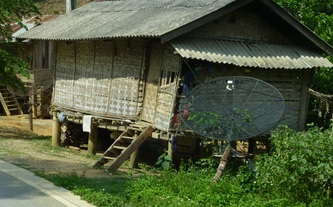 Monday 22 April
A river flows through limestone Konglor Cave for 7.5 kms.
It is an amazing trip in a wooden boat on the crystal clear cool waters through huge caverns with cathedral ceilings and a sandy beach where we were shown through an area of stalagmite and stalactite formations. It was shallow in places and the boat had to be dragged over the stones to the next section.
After spending a few hours on the canoe through the mountain and back again we drove back to the Mekong and north to the capital, Vientiane.
We put our passports in at the Mongolian Embassy to get our visas for onwards travel from China.
Tuesday 23 April - Friday 26 April
Time in Vientiane to relax, prepare for China, meet the last couple who will be travelling through China with us, have the truck serviced and look around Vientiane. Five couples will travel through China. Rob and Robyn, Miles and Marina, Phil and Mads as well as Guy and I in trucks and one couple, Jon and Jude in a landrover. 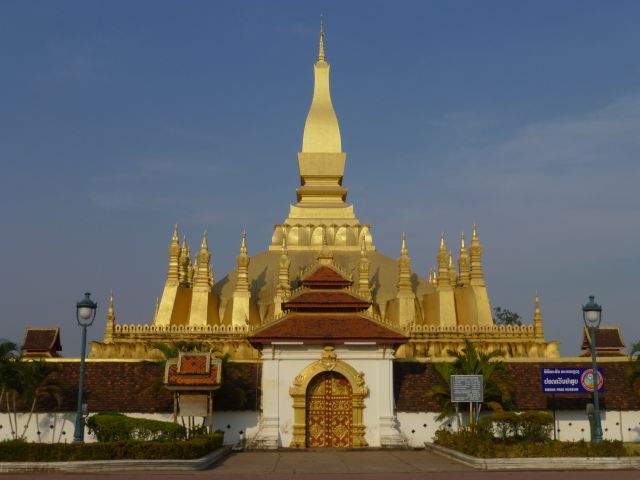 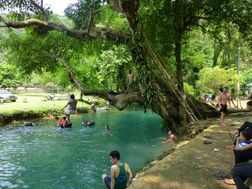 Blue Lagoon
Sunday 28 April
Vang Vieng is a backpackers destination where we hired pushbikes and cycled along a very uncomfortable gravel road for 8 kms to a beautiful, cool, clear waterhole which the locals love too. In the afternoon we went tubing for almost 3 kms along the river along which there are a few bars placed. We drank at 2 of them and then had to paddle hard to get back as the river wasn't running very fast. 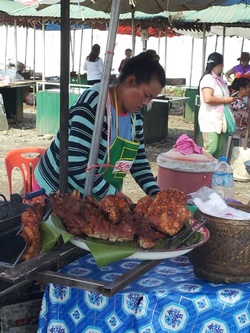 Chunks of pork and crackling.
Monday 29 April
After a heavy tropical storm last night the weather had cleared for our long drive on the windy road north then east. But before we left we just had to get some crackling. It is just so nice.
We drove through some beautiful mountainous countryside and interesting villages perched between the road and drops down to the valley onto the undulating hills around Phon Savane. We camped near site one of the Plain of Jars.

Tuesday 30 April
The Jars were interesting especially as their use and meaning is unknown but more overwhelming was the realisation of the impact of the 'secret war' on these people. This area was very heavily bombed when the Americans were fighting the Viet Cong. Many bomb craters still mark the area as well as unexploded cluster bombs being an ever present threat to subsistence farmers and their families almost 40 years on. We learnt a lot at the MAG display. Children in particular are in danger from the bombies which are cricket ball sized bomblets released by cluster bombs. They contain ball bearings and shrapnel designed to kill and maim people. We heard 2 explosions the day we were there.
Set up camp at a fish farm with Jon and Jude, Miles and Marina.

Wednesday 1 May
The happy faces of the markets at Phon Savane. (Click on the photos to enlarge them and see the whole photo.) 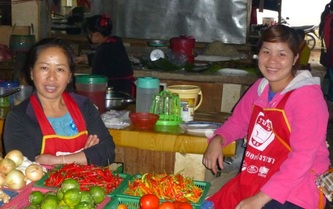 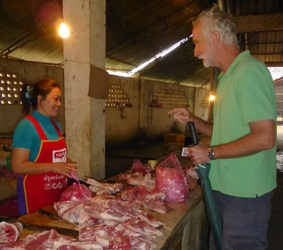 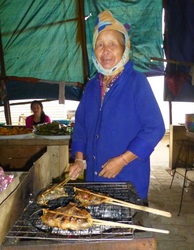 We drove back to Phon Savane and back through the mountains towards Phou Khoun again. We decided to set up camp on one of the few flat areas which was just outside a village when a 16 year old boy on a small motor bike came by. He came over to talk to us and practise his English. We were invited to dinner and to stay at his place. And so began a big learning curve for us in this Hmong family.
They are subsistence farmers with 4 children, the youngest being Por who is 16. They struggle to send the 18 year old to college and must send 50,000kip ($6.25) every 3 months to keep him there. Their rice paddy is several kilometres away in the mountains. Many children leave before 6am to walk kilometres along the maintain roads to school which starts at 8am. There is power but other than a communal tap there is no running water.
We enjoyed a meal with Por, his parents and oldest brother, a truckie married with 3 children also living in the house. The house had a main room with 3 small bedrooms leading off it. No windows, plastic chairs, no furniture, just many 50kg bags of rice, boxes, old pushbike, 125cc motorbike, a speaker and old TV and concrete floor. The kitchen was a separate timber sided, thatched roof and earthen floored windowless hut with little else in it and a small fire. No internet, computers or TV. It will be hard for him to become a translator but he is courageous and willing to try hard.
We would have liked to keep in touch with Por but there is no postal delivery service in Laos. 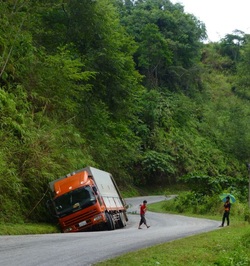 A Beerlao truck moved over a little too far for another vehicle.
Thursday 2 May
We drove Por to school in the truck and he showed us through his school where we met one of his teachers. More learning for us.
Then it was westbound along the squeezy mountain road which is shared with children walking to school, farmers walking to their plots, pigs, dogs, chickens, ducks and of course trucks. Next is Luang Prabang, a UNESCO heritage town in the north.
We find a guesthouse on the Mekong and go to the very colourful night markets. 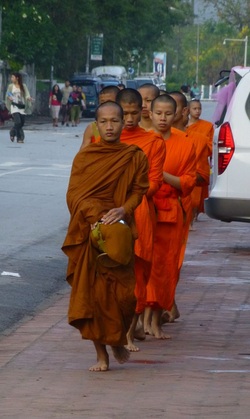 After prayers and an hour of meditation. comes the alms ceremony at 6.00am every morning
3, 4 and 5 May
Time out from the winding road to enjoy Luang Prabang with its many wats and french colonial architecture. We also saw Kuang Si waterfall just outside town and watched the giving of alms to the monks at 6am.
6 and 7 May
We are on our way to the Chinese border with a stop at Luang Namtha on the way. We stop for a break and meet and a French family travelling with 3 primary school aged children in a 2 wheel drive motorhome.They had just been through China but they had also traveled through Australia which they enjoyed but stayed only 6 weeks instead of 3 months because of the expense.
Guy is feeling peckish and there is such a choice of nibblies at the shop.
We stayed just below the stupa overlooking Luang Namtha.
Wednesday 8 May
Time to ready ourselves for crossing the border into China tomorrow. We are meeting the other couples at Boton this afternoon.