13 July 2014
We entered Poland to see truck stops on either side of the road with rows and rows of trucks from various countries in each one. The truck stops had a restaurant and kantor (money exchange). We hadn’t seen that number of trucks in one place anywhere before.
We drove south to the Bialowieza Park which neighbours Belarus in the hope of seeing European bison in  the wild. 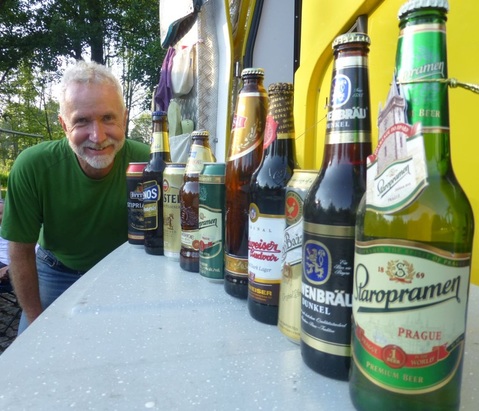 There were many good cheap beers and Guy tries to test them all. This selection cost about $12.
Guy has been trying many beers since we've been travelling in the truck and here is his brief analysis:

Recommend: Anything Czech or Belgian.
Best value: Hard to choose as all so cheap but probably Russian beer at around 80c per 500 ml bottle.
Favourite: The best was a Belgian beer –  Leffe Brune. Brown beer with malty, caramel aftertaste.
Summary: All good except for Heineken and the Russian Passionfruit and Pineapple beer (Cheryl liked it!) 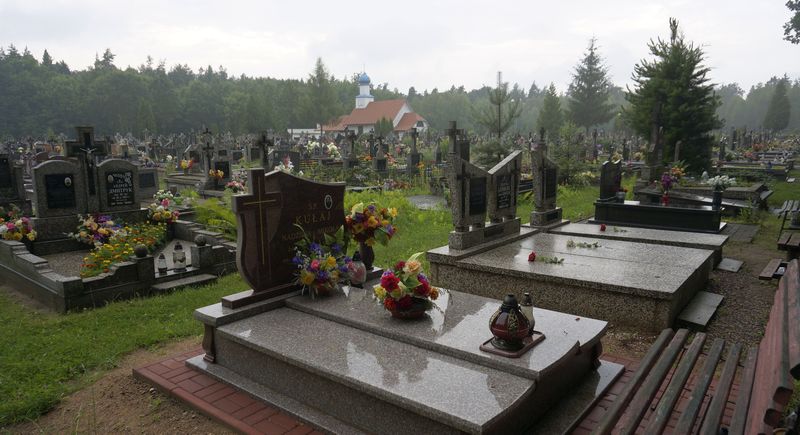 Misty cemetery as we enter the forest.
15, 16 July
West to Warsaw. Yet another old town with flat, wide footpaths we enjoyed cycling on to get to the old town and other sights. Visited the Warsaw Uprising Museum documenting the tragic uprising of 1944 when the city populace was left to the mercy of the German Army by the Allies. Then cycled into the old town which had a lovely atmosphere on a warm sunny evening. 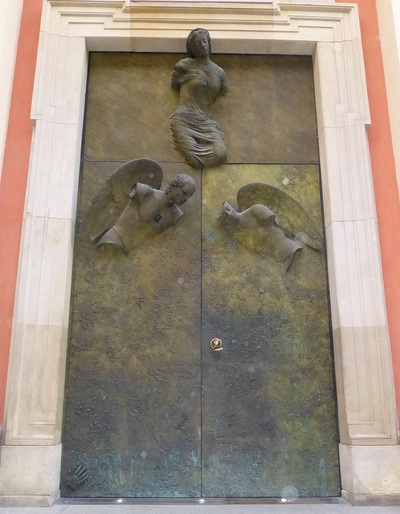 Church doors in old town, next to St Johns Cathedral 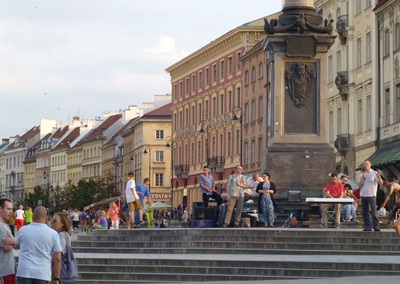 Performers at the base of Sigismund's Column, old town.

Old soviet apartment blocks look a lot better with a coat of paint. 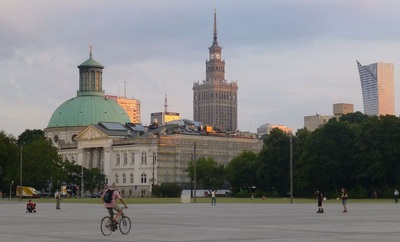 Warsaw skyline with Guy in foreground. 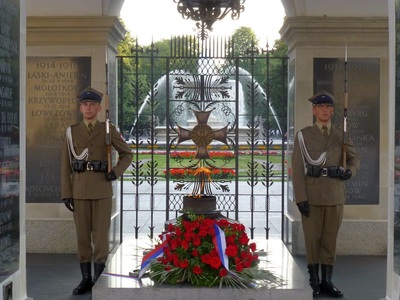 Tomb of the unknown soldier. 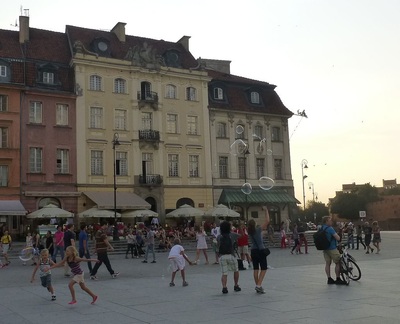 Chasing bubbles in the old town. 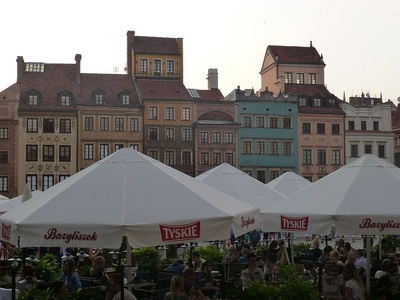 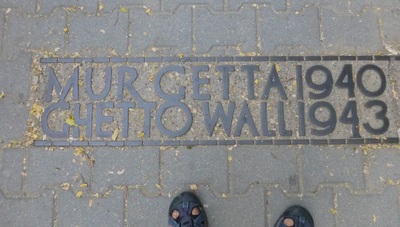 Reminder on the footpath. 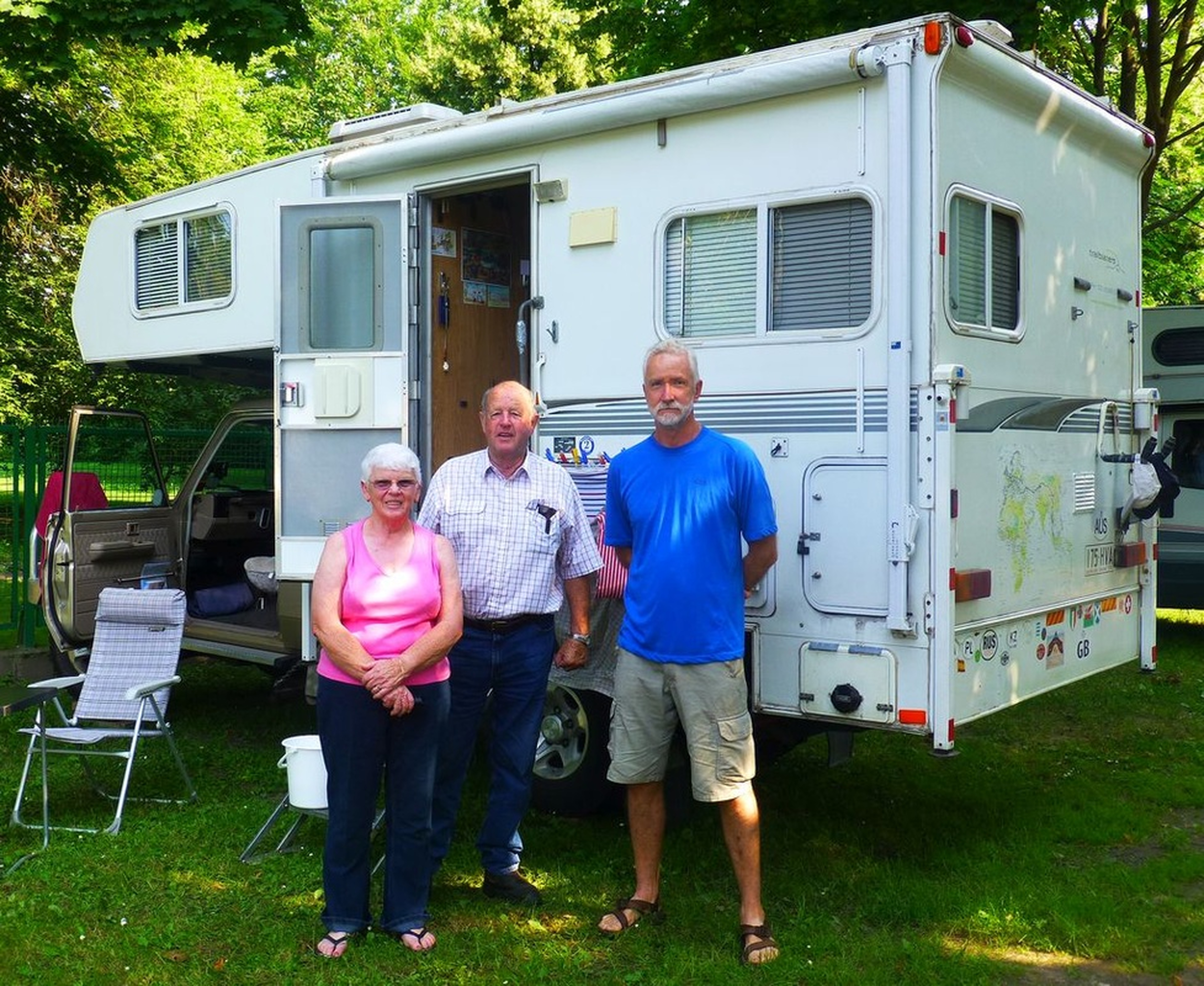 Jill and Paul, some happy Aussie campers who overlanded from Australia more than 10 years ago!
17, 18 July
Travelled toward Berlin. Straight down the highway with a few tolls thrown in.

19, 20 July
We found a campsite very close to the city but it was very basic. We had been to Berlin less than 2 years ago and so we did not make a mad dash to see a lot of things. We spent time in Alexander Platz where a peaceful protest was brewing but the police weren't taking any chances, the German Museum of Technology and also wandering along Unter Den Linden up to the Bundestag.
Not even 50 kms on, we were invovled in a crash. We were in the slow lane of a 6 lane divided highway and doing 90 km/hr. We felt and heard a big bash from behind which momentarily pushed us forward. We pulled over and saw an Astra station wagon across the road. It must have been doing more than 150km/hr (no speed limit on this autobahn) in one of the fast lanes before drifting over and into the back of us before hitting the guard rail. Miraculously there were no serious visible injuries to the 2 conscious occupants of the Astra, thanks to airbags. We are fine but the truck's spare wheel which was underneath is now lost forever having departed across 6 lanes of traffic into bush. The exhaust was crumpled and there is spring damage as well as other damage.
After 5 hours we managed to find a truck place to repair the exhaust, then waited until 10pm for them to finish.
While escorting us back to look on the other side of the road for our spare wheel, we saw another rear end accident. We commented to the police who said "We'll go there next. There are 8, 10, 20 a day." 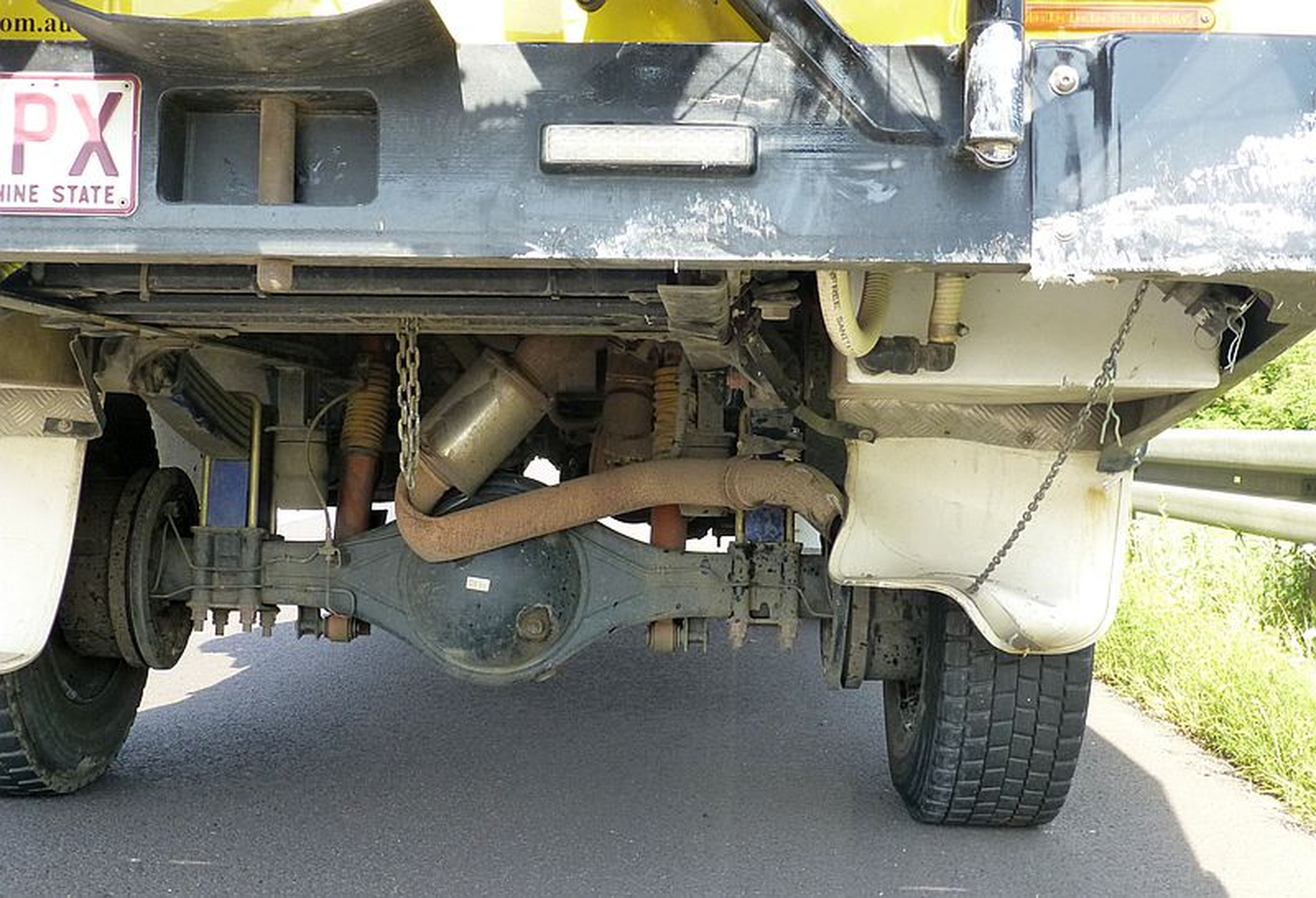 New spare tyre with wheel was once attached by the chain, scrunched exhaust, spring damage on the right as well as bumper bar and other minor damage.

We headed back along the autobahn following police and saw the kilometres of banked up traffic. Many trucks on this road.
23 July
Nervous start as we drove onto the freeway, cringing every time a car doing twice our speed rocketed by. We passed where the division between East and West Germany once was and yet another accident before making it to Holland.
Holland

24 July
Some work on the truck and then a drive south to Katwijk by the sea where we camped surrounded by family holidaymakers. There is a huge sand dune between the campgrounds and the flat sandy beach with Sandgate type muddy 'surf' and many holiday makers even at 7pm. Enjoyed a cycle along the good wide cycle paths through the area of natural low scrub to the south. 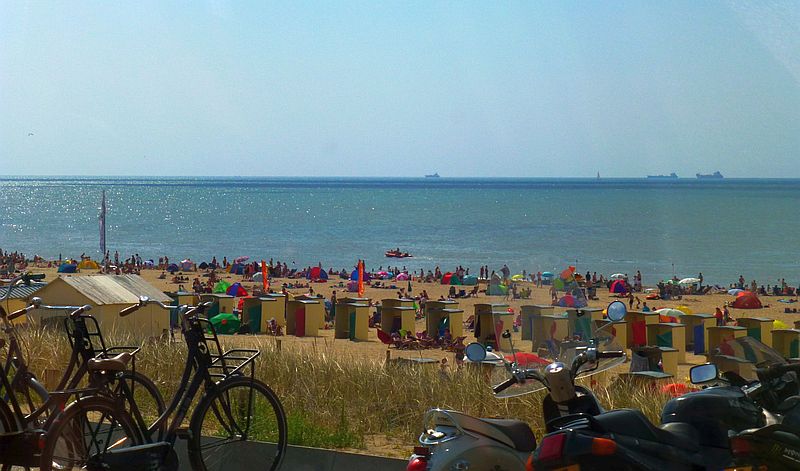 Katwijk on the Dutch coast 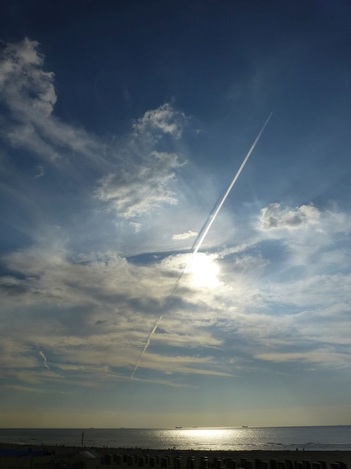 Love the contrail shadow on the cirrus clouds.
25, 26, 27 July
We spent 3 days camped at Noordwijk visiting The Hague, Amsterdam and the Rijksmuseum. The weather was beautiful and the Dutch were certainly making the most of it. 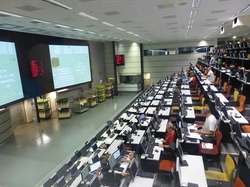 Aalsmeer Floer Market auction room.
28 July
Up early to see the flower markets at Aalsmeer. Huge building with most flowers coming in from Europe but included flowers from other parts of the world also. Very interesting to watch the auction process of bidding against the clock for the various flower lots rolling through on trolleys.

We drove north to catch the overnight ferry we had booked to Newcastle, England. 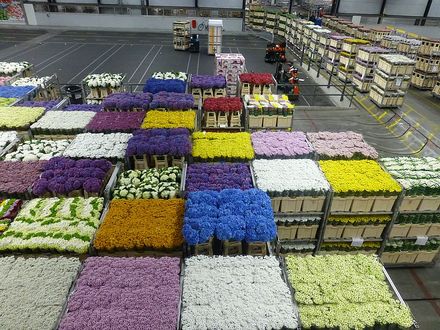