From the Brazilian border we had about 2500kms to go to Porto Jofre in the Pantanal, a few big driving days, a rest day camped at a pousada and finished off with 150 kms of stoney and dirt, sometimes corrugated road with rickety old wooden bridges.
Towering brazil nut trees were visible the first few days. It is illegal to chop these tall straight trees down in Brazil and so while the forest around them disappeared to make way for farming they are a reminder of what has gone.
The photos below were taken as we drove east to Porto Velho, south to the pousada and then Pocone. The weather was dry and very hot, hardly dropping below 30C at night.

This huge buttress rooted rainforest tree was in the grounds of the pousada we camped at. They owners of German heritage had bought many years ago and since managed to keep a large section of their land in its natural state. They have had many nature groups stay here. Unfortunately as the land around them has been cleared their diversity has decreased.
6 - 9 September       Porto Jofre and the Pantanal
Heading south on the Transpantaneira, birds of interest started to appear almost immediately even though cattle stations and pousadas line the track. Many light coloured tall ant nests but no anteaters seen, plenty of brahman cattle, caiman, cleared land, dust and heat (over 40C), even the birds were panting. 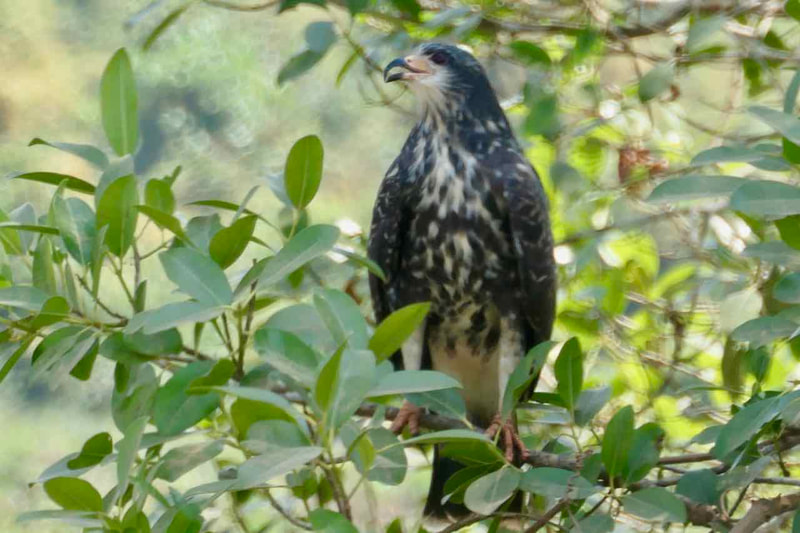 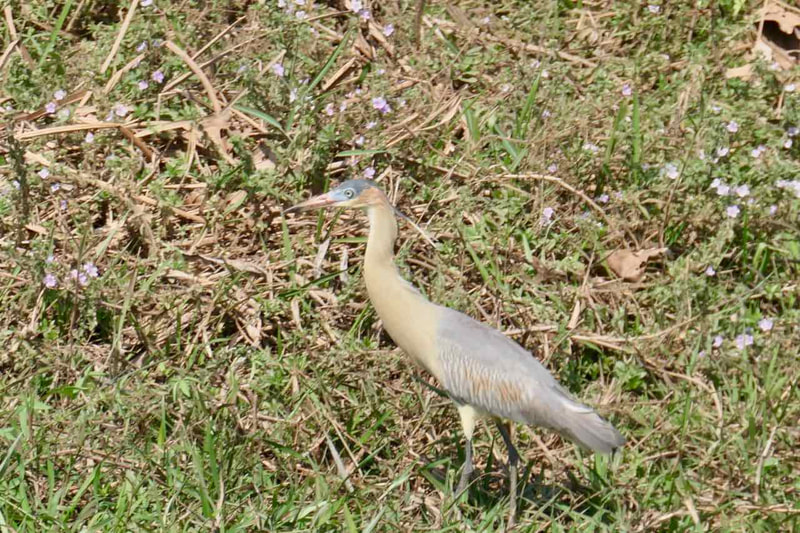 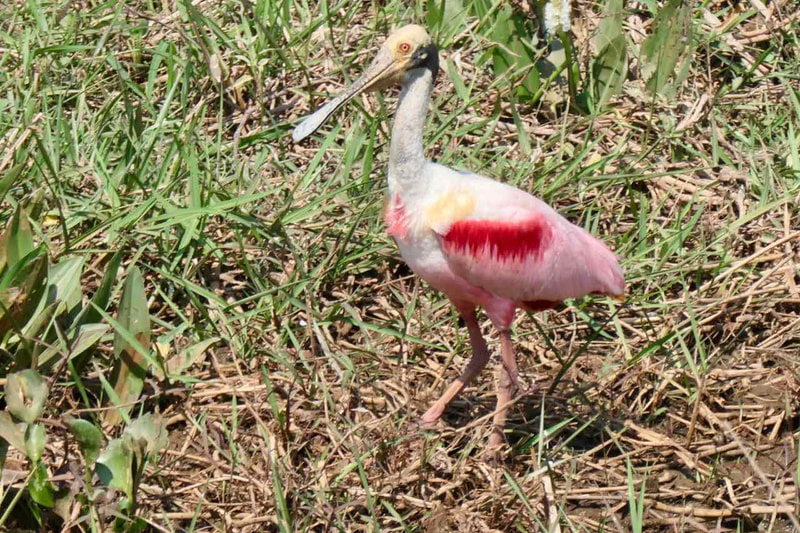 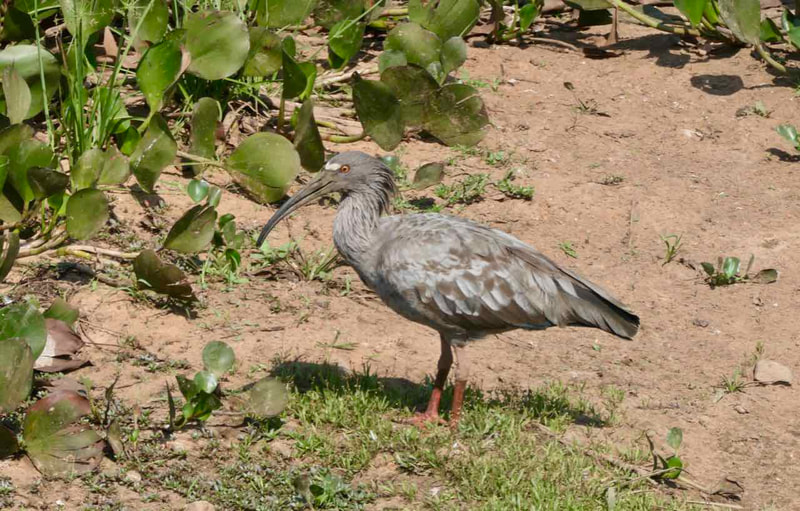 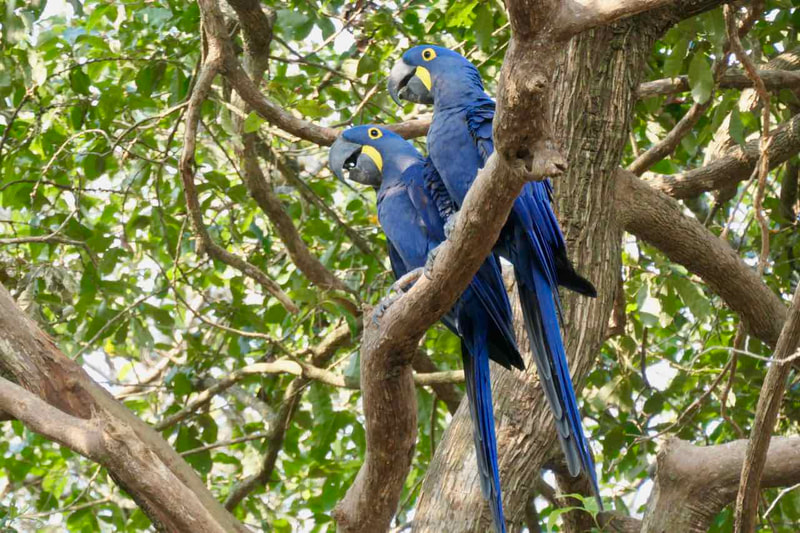 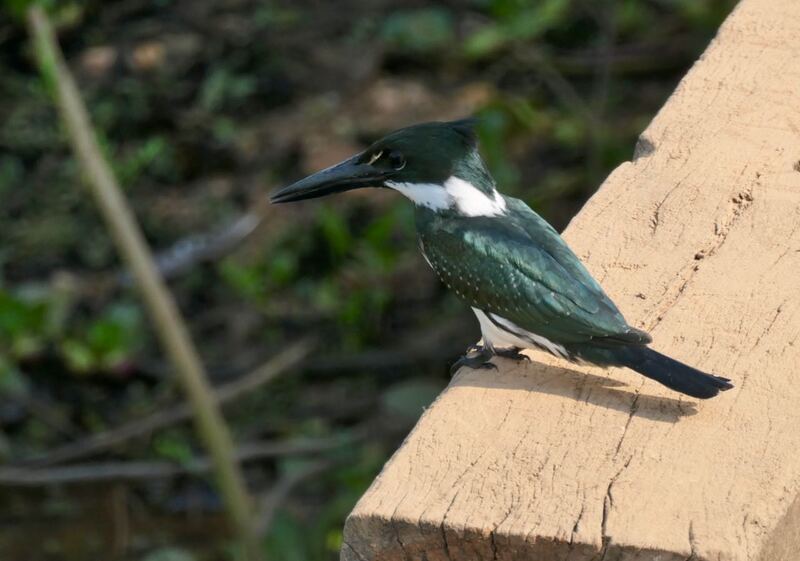 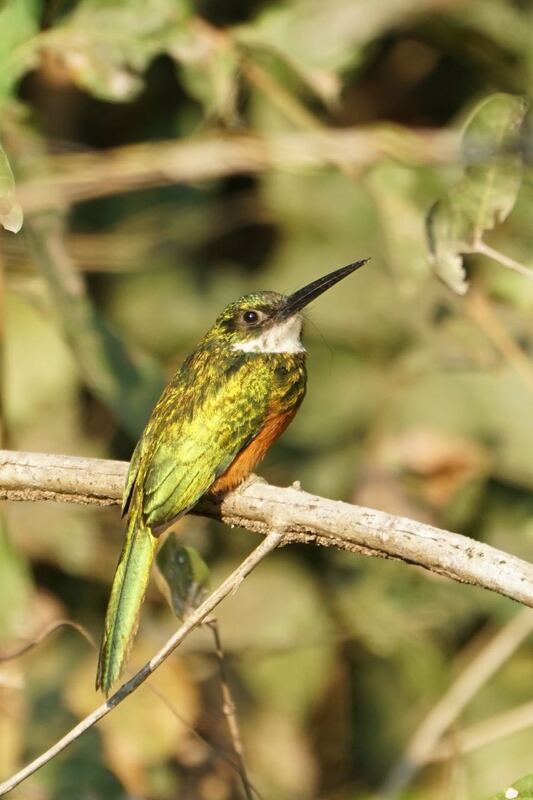 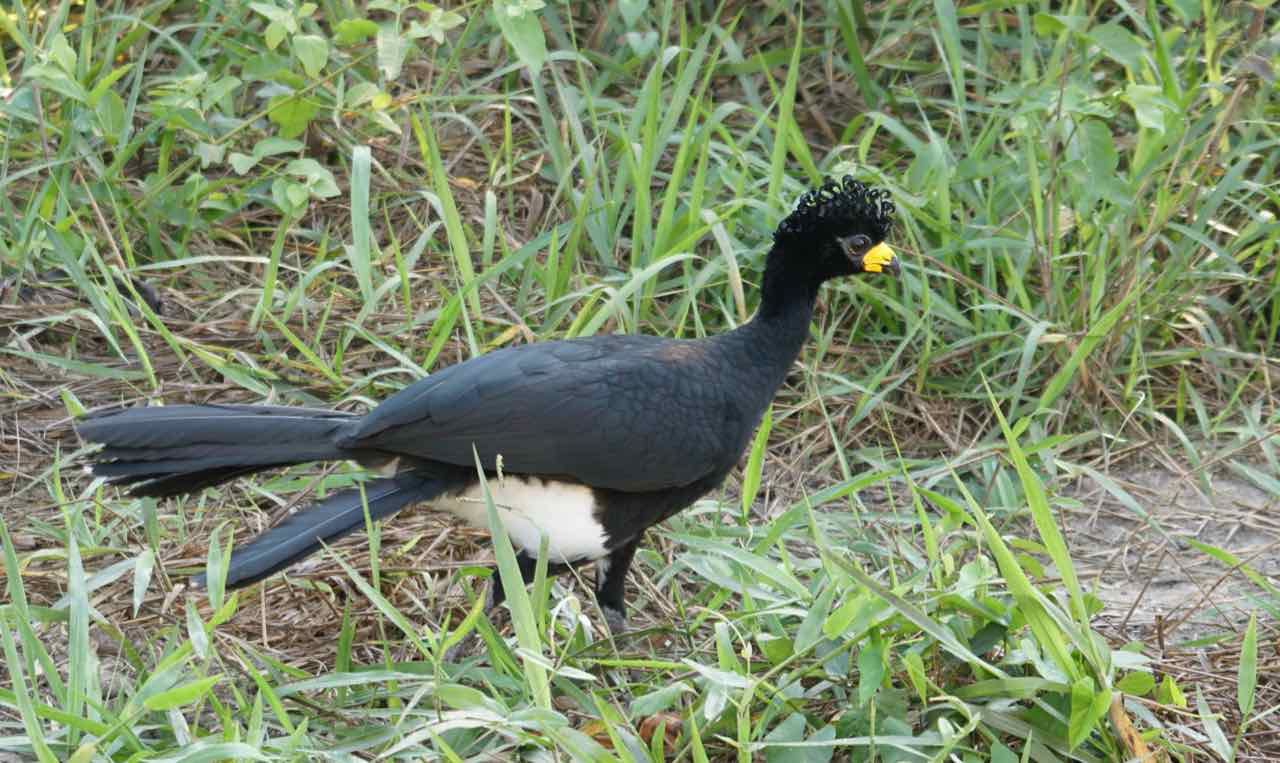 And bridges, some looked stable, some had detours and some looked dodgy but had to be checked and negotiated..... but there were also a couple of new concrete structures waiting for a ramp to be built up on to them. 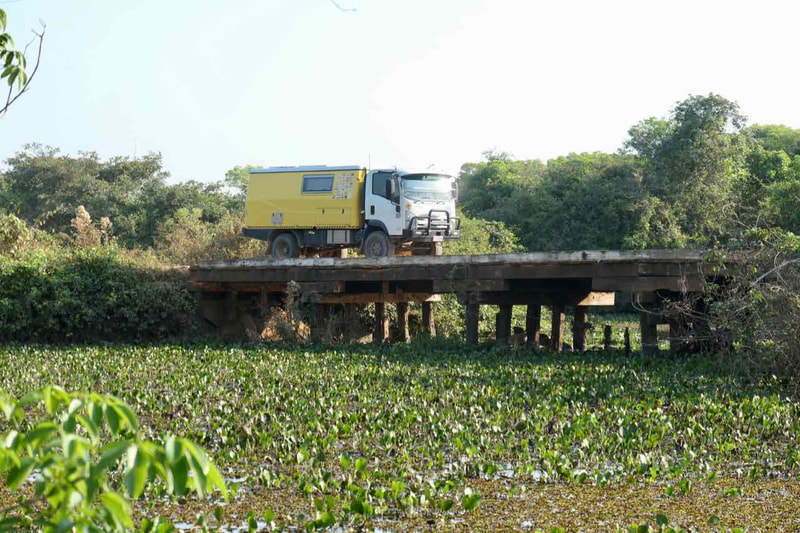 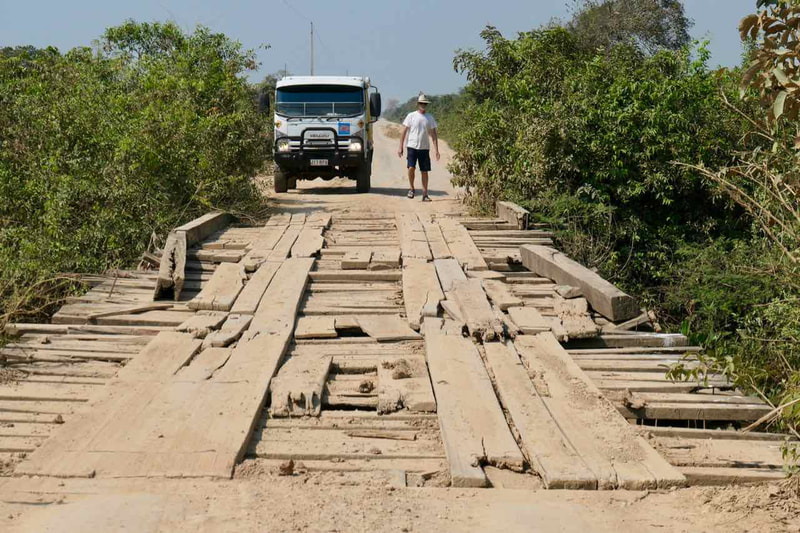 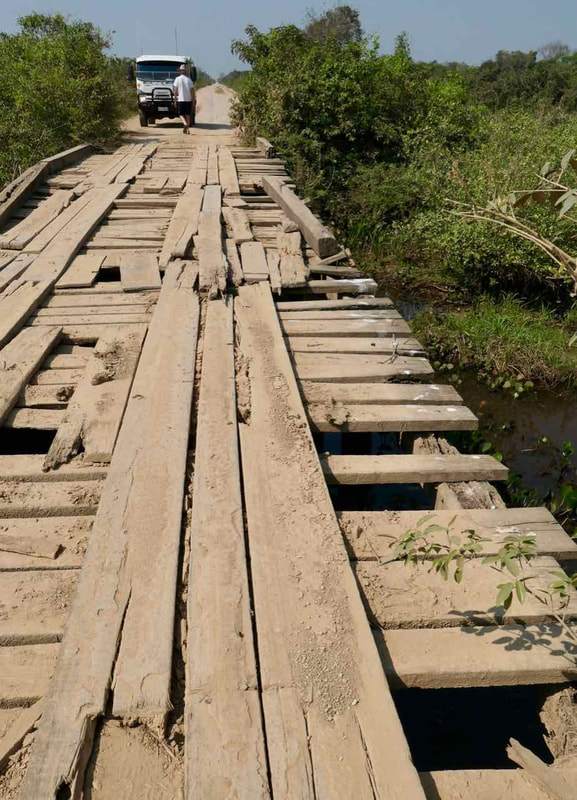 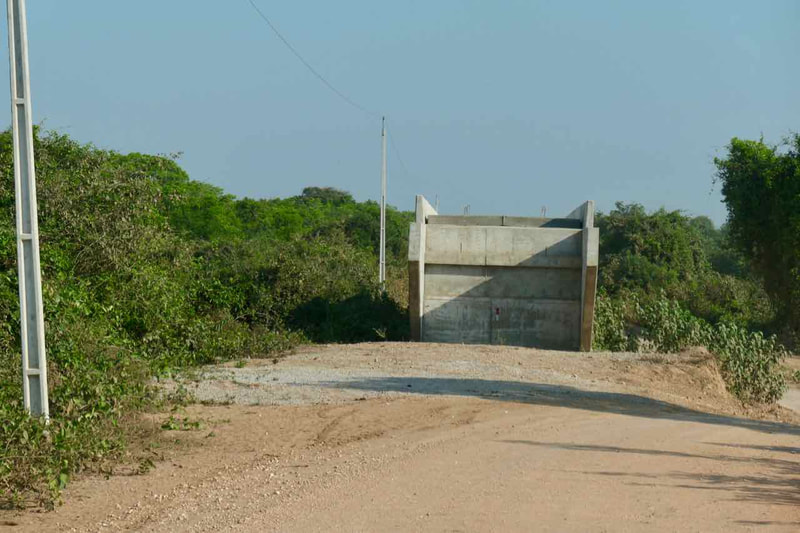 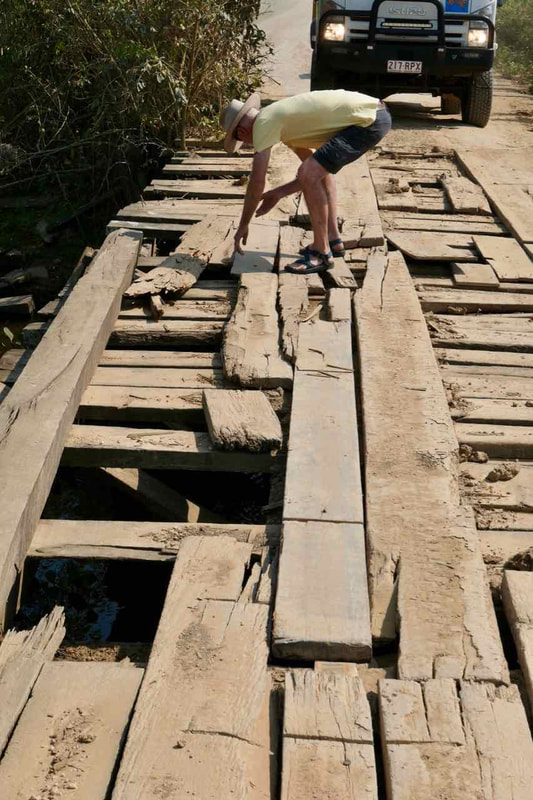 On arrival at Jaguar Camp at Porto Jofre we saw 5 hyacinth macaws in a tree and small male and female black and gold howler monkeys. It was a good start before we ventured out onto the Cuiabá River for an afternoon trip to find jaguars and other creatures of interest.
Our first siting was of the giant otters feeding on fish around floating vegetation in the stream.
Then the call came as to where a jaguar had been spotted. We zoomed off in that direction and about 10 minutes later we were stunned to see that we were one of about 20 boats watching a jaguar walking along a river bank prior to gracefully plunging into the water. No caiman caught this time.
​We travelled about 50 kms up the river and its tributaries and on our return the boat driver showed us to a particular hole in an embankemt where a 1.5m yellow anaconda was settled.
10 - 12 September
From the Porto Jofre we drove to Cuiaba, then Chapada dos Guimarães hoping to see some greenery and waterfalls. Chapada is a Brazilian word that means a region of steep cliffs, usually at the edge of a plateau. The area is higher and so cooler with stunning red rock escarpments. 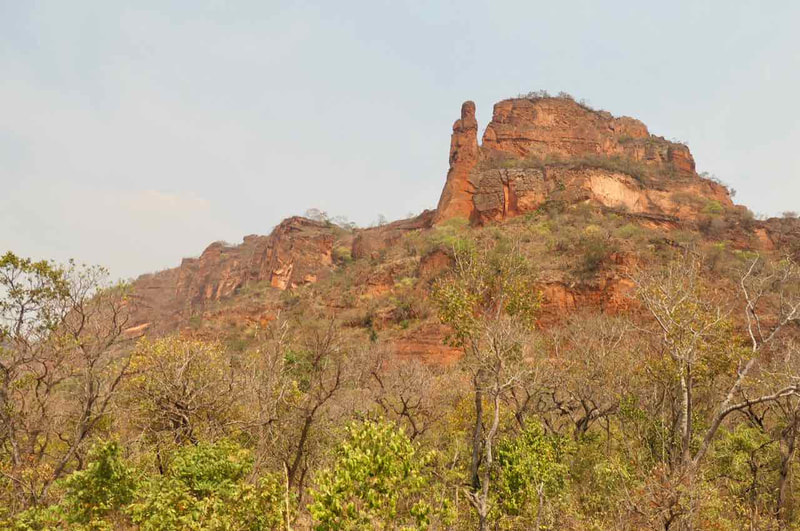 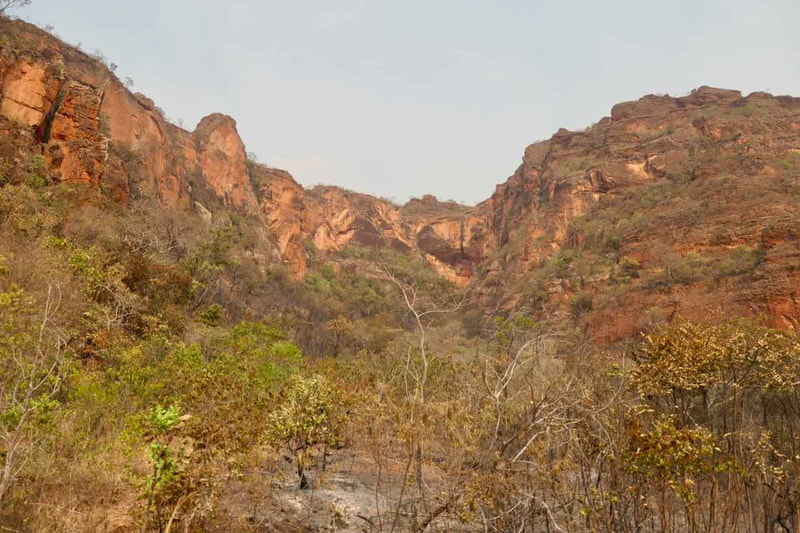 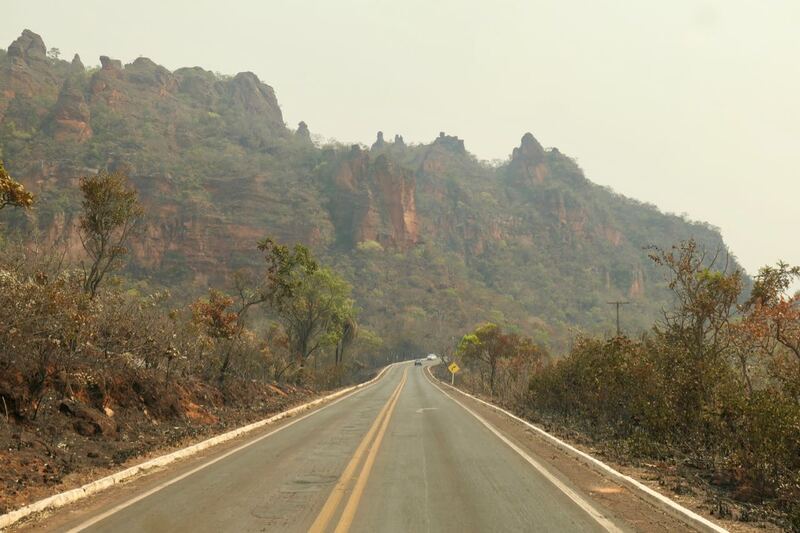 We were lucky to notice a southern tamandua or collared anteater slowly moving through a tree next to our camp. Quite a few parrots enjoyed the small forest on the edge of town too.
Unfortunately fire had been through the surrounding area and we were not allowed to enter the nearby park as firebombing was continuing. So we drove north towards Nobres. As the area was mostly burnt and a smoke haze hung in the air we decided to turn back and move on to Bolivia. 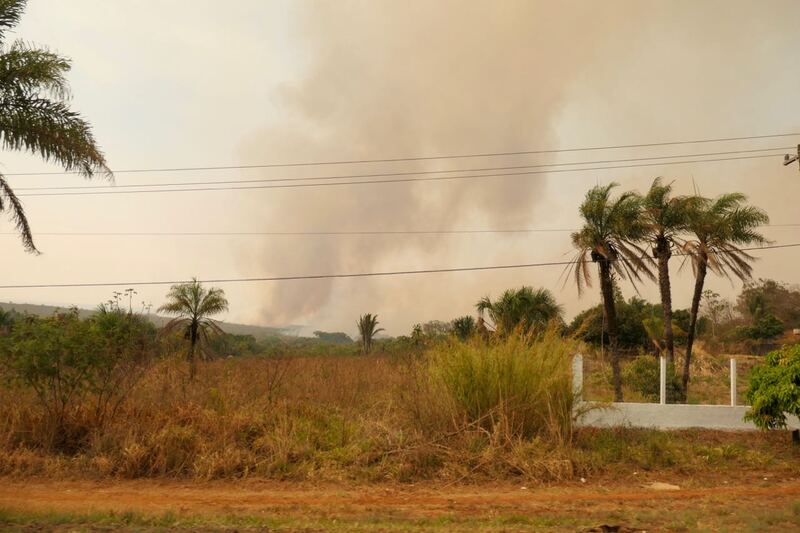 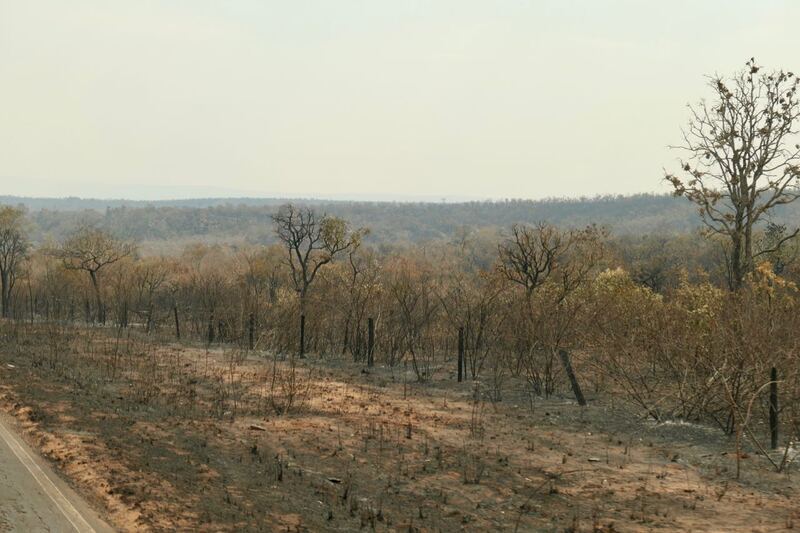 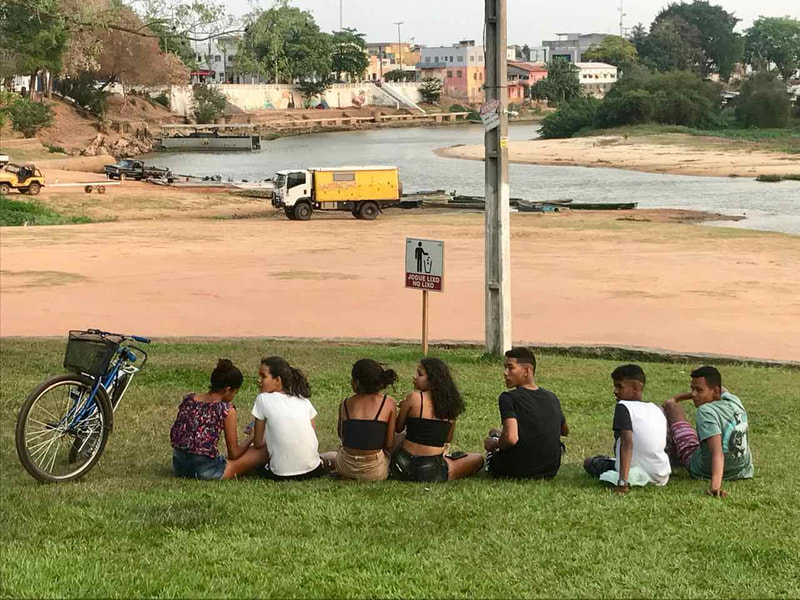 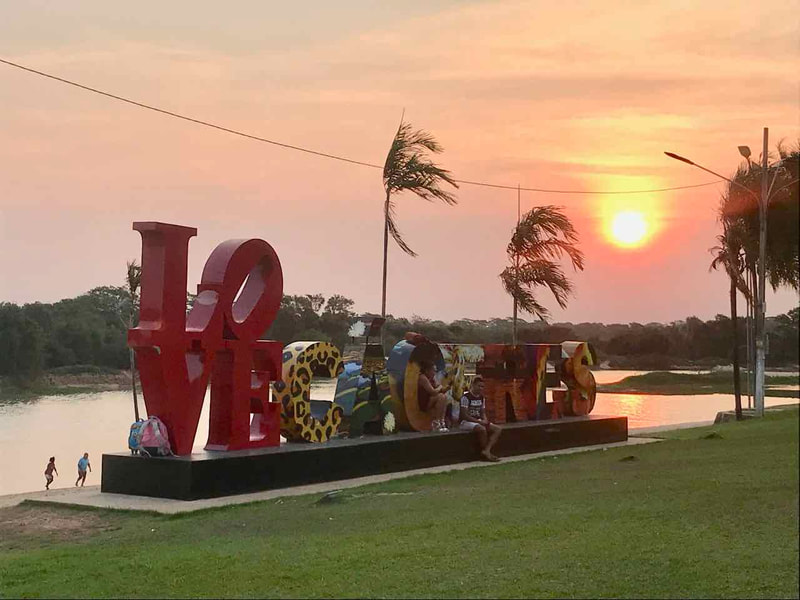 13 September
It is spring and trees are flowering in the Pantanal and west into the Bolivian lowlands from Cáceres. 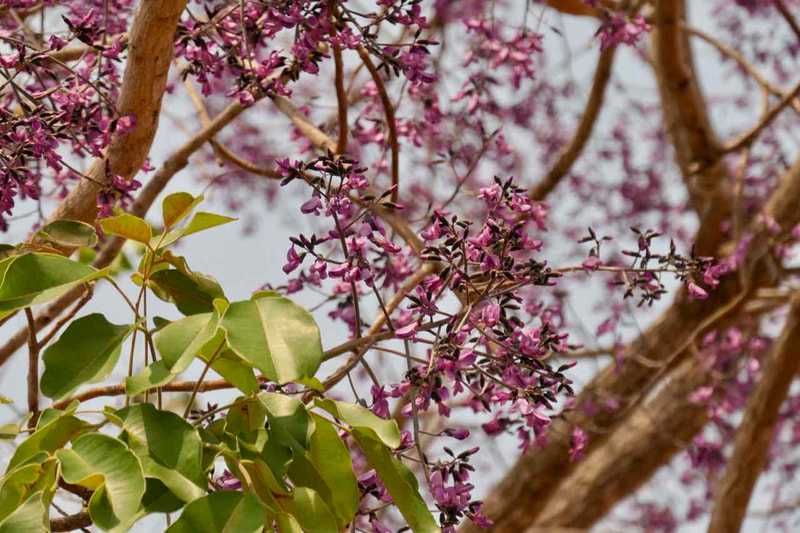 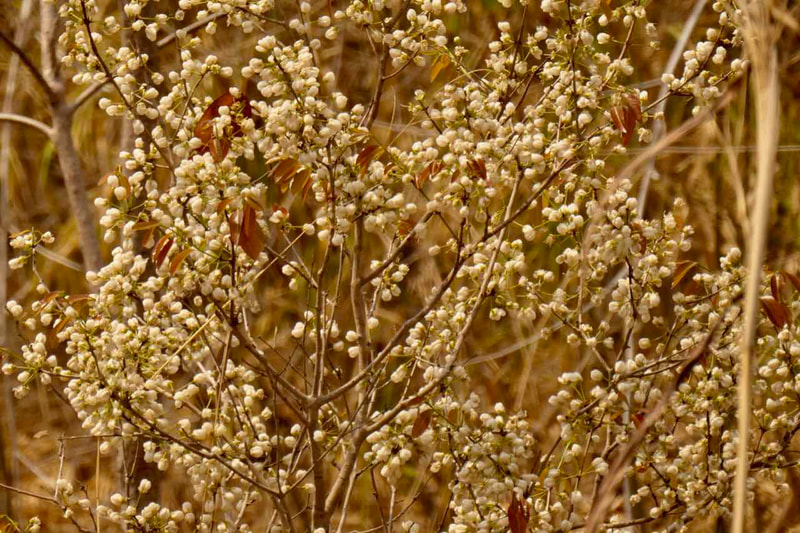 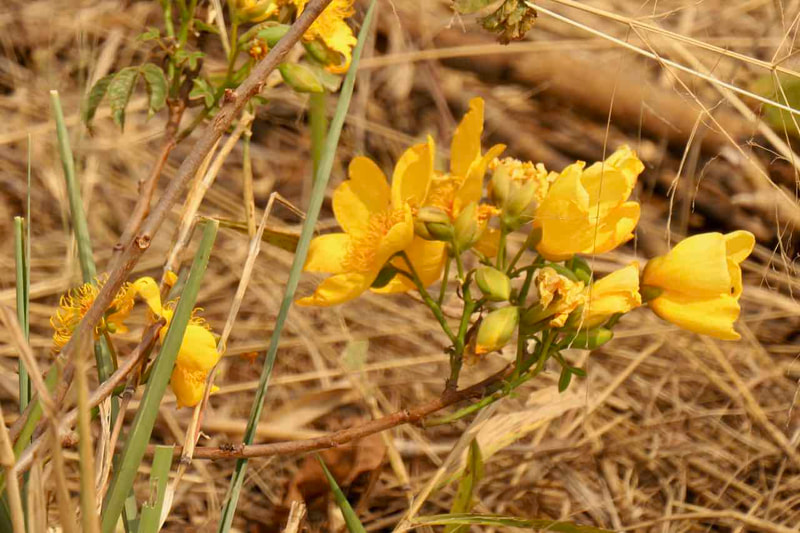 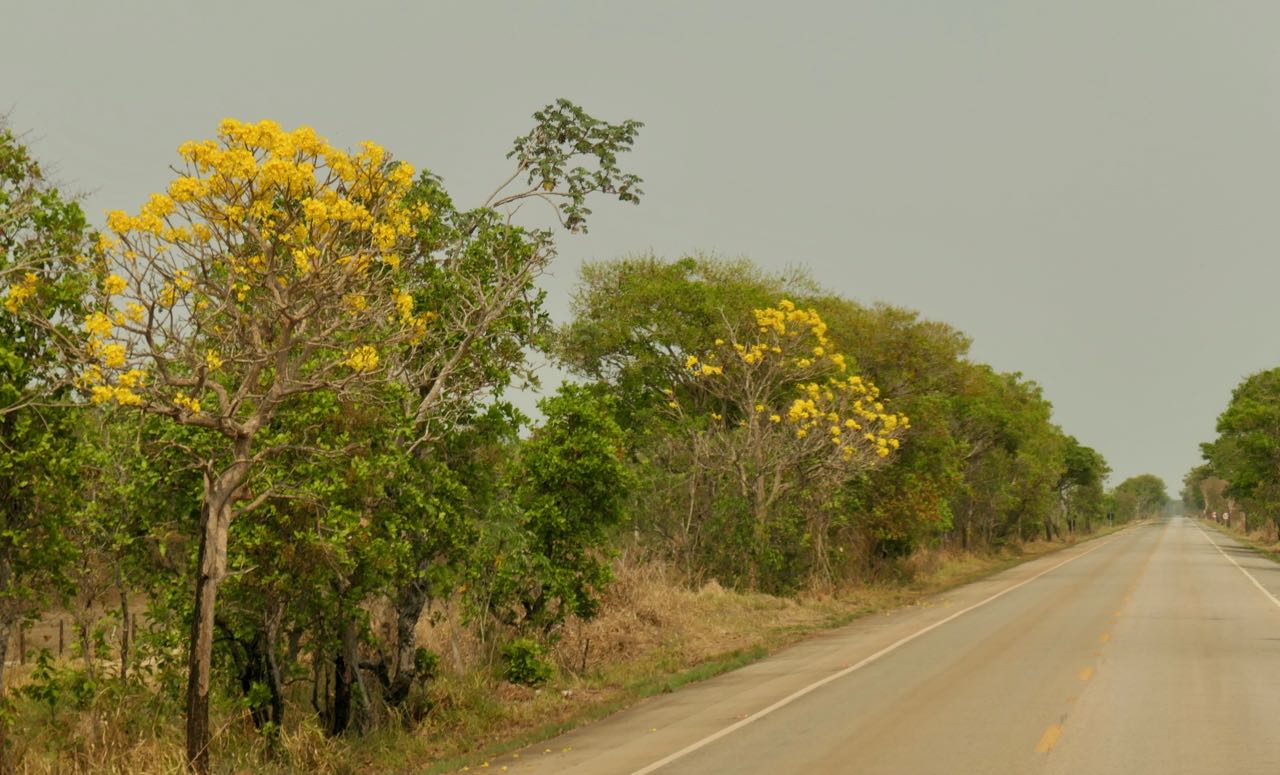 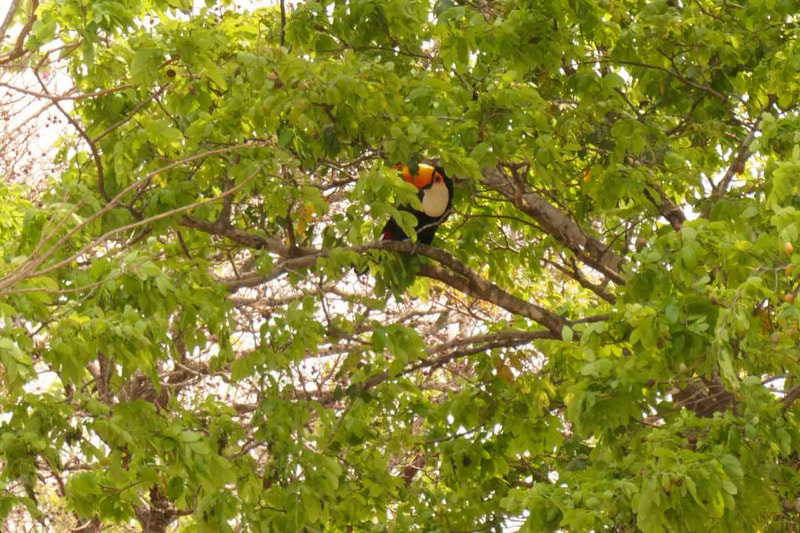 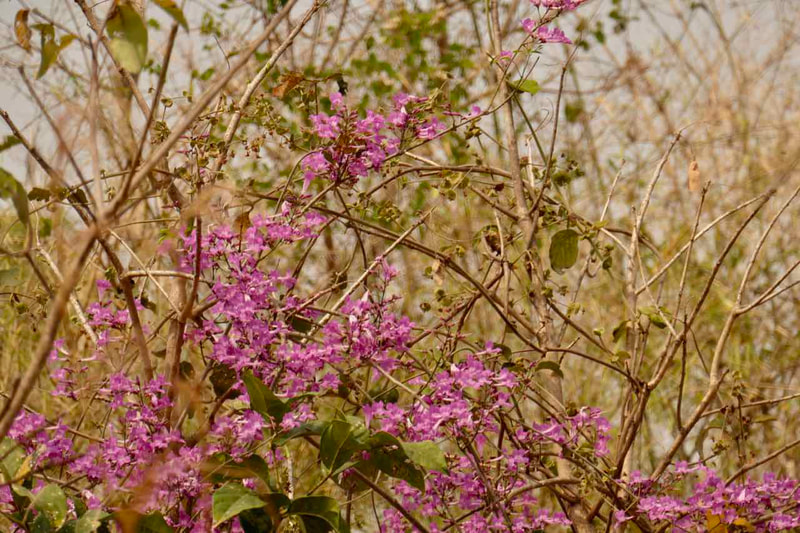 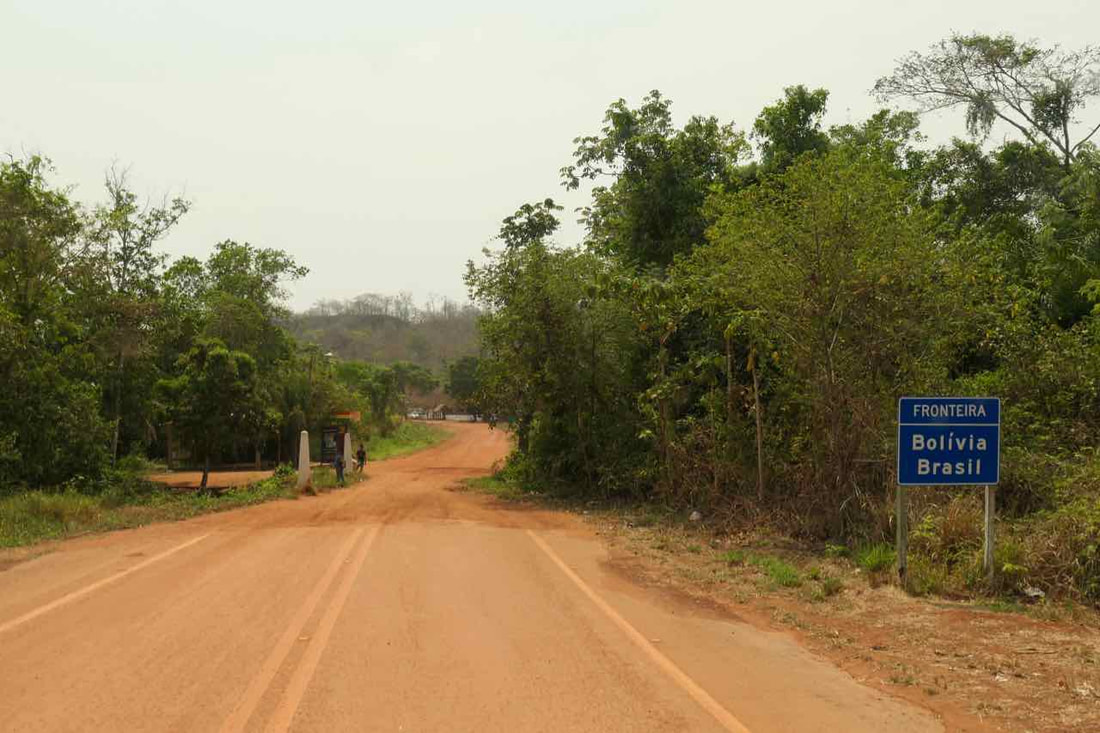 The road was sealed in Brazil but dirt as we crossed into Bolivia near the small border town of San Matias.