20 June 2016
At the Georgian border their Customs officers were very keen to inspect any pharmaceuticals we carried - sometimes medicines commonly available in western countries may need special authorisation. It was no issue for us but we had not come across this scrutiny before and didn't want to get caught up in negotiations with ex-Soviet bureaucracy. The search stopped before they uncovered our extensive first aid box with its ageing antibiotics and clean syringes.
​
Ladas and Kamaz trucks were added to the mix of vehicles we were seeing reminding us that this was a Soviet country 26 years ago and the villagers we waved to as we passed through stared back suspiciously and impassively, a marked difference from the exuberant and friendly Turks. Roads were badly potholed with frequent short sharp speed bumps every 50 metres in the town. The area is very poor and we were keen to move but the roads didn’t get better and nor did the speed bumps. Finally we spied a German offroad camper parked beside a fast flowing stream in a gorge below us. We joined them for the night. 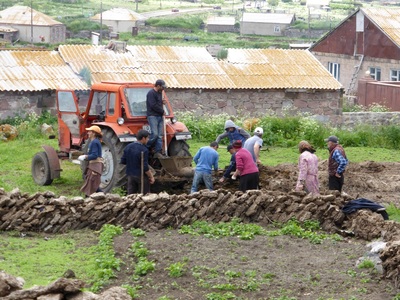 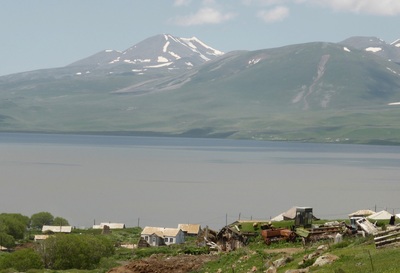 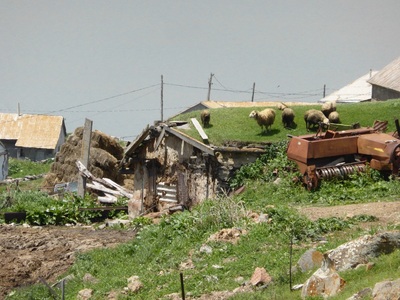 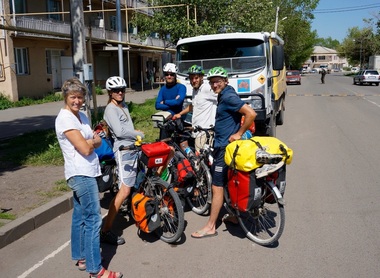 21, 22, 23 June   Tbilisi
As we were driving through Ninotsminda the next morning we passed 4 cyclists. They caught up to us when we stopped and we learnt that they are on their way to India from Germany. After 5000km they are still in excellent spirits.
We drove on passing another long distance German cyclist, Simon, on his way to China, solo.
​Fortunately the road became less potholed but we still had to be aware of the deadly speed bumps through the towns and villages. 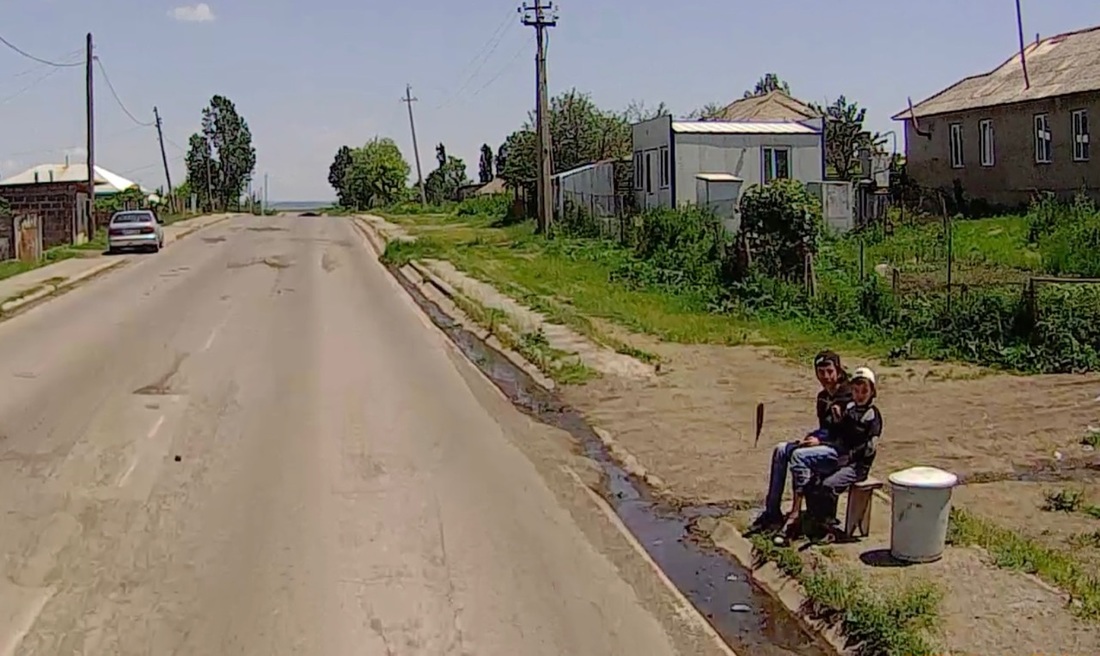 School holidays and these boys are doing their best to get some pocket money from passing traffic by selling tiny fish.
At a local shop we bought some crusty bread and cheese apparently made at the local nunnery and then followed signs along a bumpy, narrow dirt road to the nunnery. Simon caught up to us there. Nearby, locals banded together for the production of briquettes from peat and cow dung. Someone shovelled the mixture into a machine which compressed it into briquettes that locals then stacked to dry. We saw this process taking place on a few farms.
We continued on our way to Tbilisi.
There was a lot to see in Tbilisi. We stayed in a hotel about 15 minutes walk from the old town for three nights. We spent most of our time walking as there was a lot to see and lots of food to try.
We enjoyed eating Georgian food with favourites being khachapuri - a Georgian cheese bread; khinkali - national dish of tasty meat dumplings; pkhaleuli - vegetables stuffed with a ground walnut paste and seasoning unique to each vegetable. Walking past the shops with colourful churchkhela - walnuts on a thread that had been repeatedly dipped in a hot grape mixture, coloured and hung to dry was also tempting. They have the most delicious rose hued tomatoes which we had tasted a few years ago in Russia. Don't know why we don't have them in Australia. 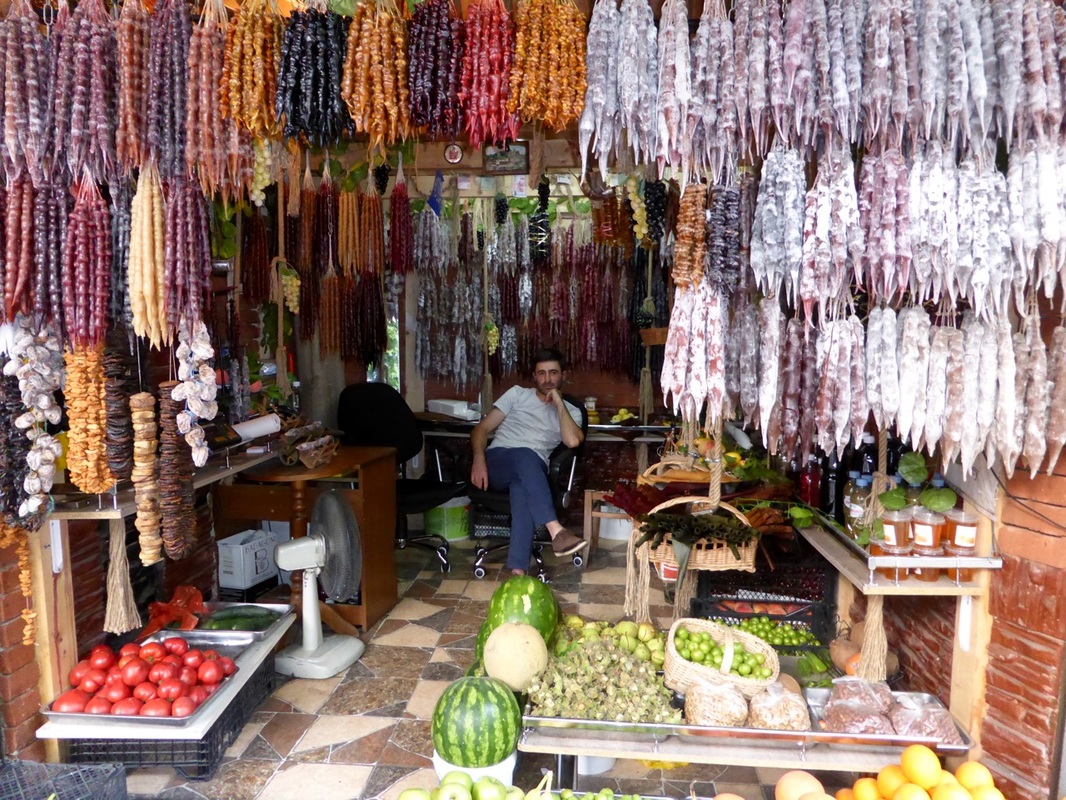 Tbilisi food - lots of different flavoured churchkhela
24 June
After a little restocking we headed west towards Tthe Black Sea on the main highway. We passed an IDP (Internally Displaced Persons) camp where the breakaway state of South Ossetia is less than a kilometre from the main highway.
We decided to turn south to have a look at Borjomi National Park which is quite mountainous. Eventually we camped beside a stream in the grounds of what was once a monastery. Many young peolpe were making the trek up to the restored small church.
25 June
We arrived at the Black Sea with its black sand on a weekend, so it was quite busy. We camped amoungst the trees not far from the shore and had an enjoyable swim in the calm, reasonably clear warm water. 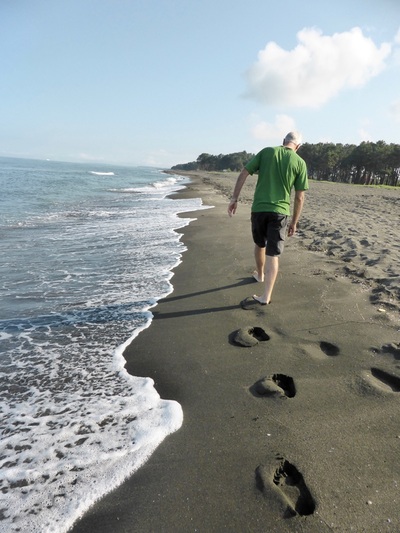 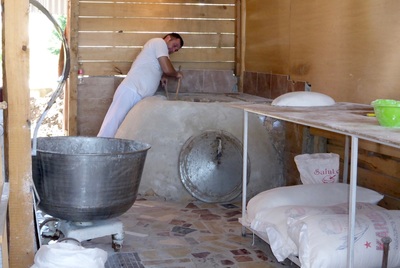 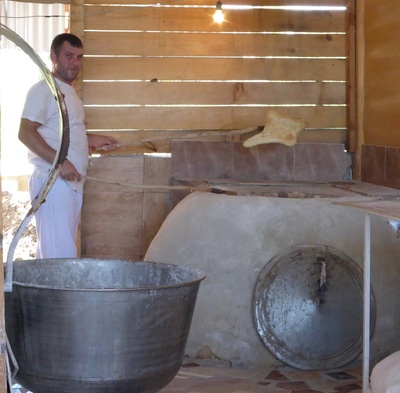 26, 27 June
Next morning we drove up to Ureki, known for the healing benefits of its magnetic sand beaches. It didn't feel different to us.
Heading south to Batumi we stopped to see the Botanical Gardens but they had dug a trench across the road to lay pipes and so we couldn't get there. Around Batumi and into the mountains to the south east. We followed a major stream up to Machakhlistskali where we asked if we could camp by the water. Locals indicated that the stream may come up in the night due to a dam in Turkey releasing water and we would be in danger. But a young man told us of another stream where we could camp and so that is where we went.
We arrived in the picnic area packed with curious locals having barbecues, yes shashlik, swimming and enjoying themselves. A curious boy looked in the camper, went off to tell his mum who returned with barbecued meat and khachapuri. She looked in and then it was a gaggle of her friends coming through and taking selfies etc. Very polite and very funny. Of course no english.
As things quitened down Sergei who had told us of this place arrived with his wife Dasha and offered to take us for a drive up into the vallley. Sergei runs raftingtrips and wanted to check out the are. We were very happy to go along. 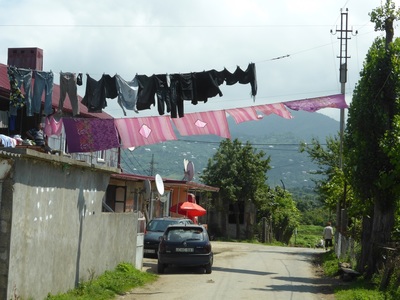 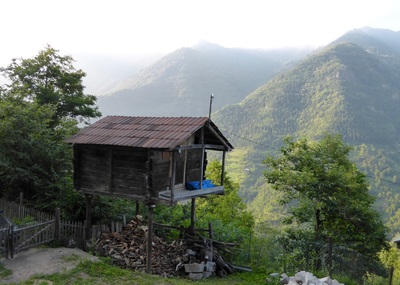 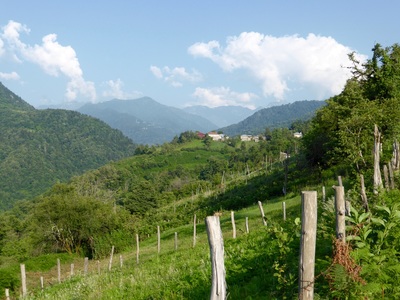 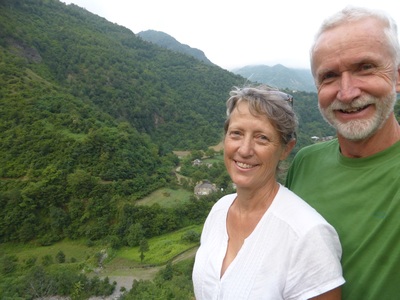 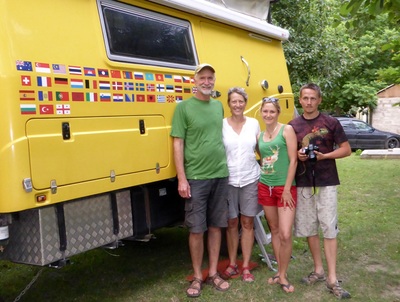 28 June
​Our last camp had been a very interesting one, but we needed to move on, back through Turkey and to a beach in Greece.

Our last camp next to a stream in the mountains in south west Georgia.