Wednesday, 11 September 2013
The crossing into Ukraine was slow but no problems. We put the clock back an hour and bought third party insurance as we had been told the police may want to see it. Not sure how effective the insurane is but hopefully we will never find out. The countryside was a continuation of the rolling steppe covered with sunflowers, wheat and other grains. But Mariupol was a smoggy industrial city. 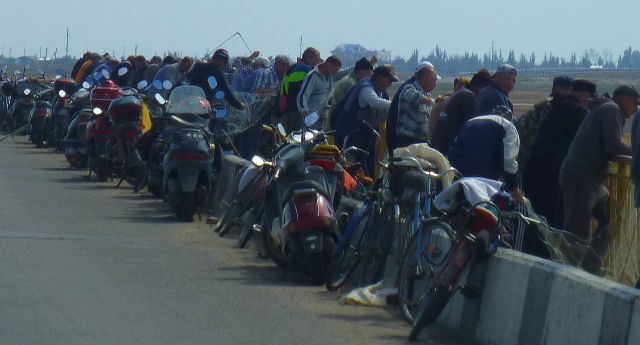 Looking from the other side of the bridge! 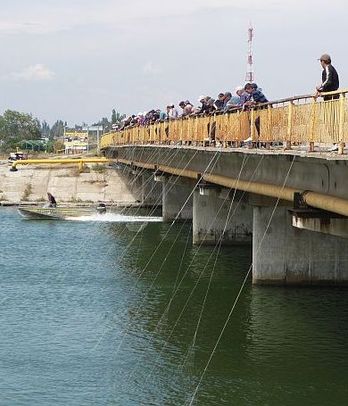 Bridge at the start of the Arabat Spit. Are the fish biting?
Thursday, 12 September
While heading south towards Yalta we decided on a change of route to see the Arabat Spit. It is a sandy spit only a couple of hundred metres wide and 108 kms long. The sandy track was corrugated in places but the diversion was worth it. Although it was quite remote many people had come here over the years and the beach was littered with rubbish. Such a shame as otherwise the place was unspoilt and quite a few different birds were present.

We camped half way along the spit. As it was warm and there was no passing traffic we left the main door open but the screen door closed for the night.saw quite a few different birds. 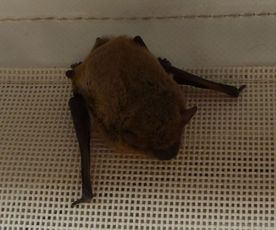 The body of the bats would have been about 5 cms long.
Considering the date I should have been prepared for Guy to wake me just before dawn so I could see the tiny bats hitting the screen door and window. They know the bat whisperer is about. Unfortunately a few of them nestled in the pockets on the door where my shoes are - obviously no sense of smell...or do my shoes smell like a bat cave! 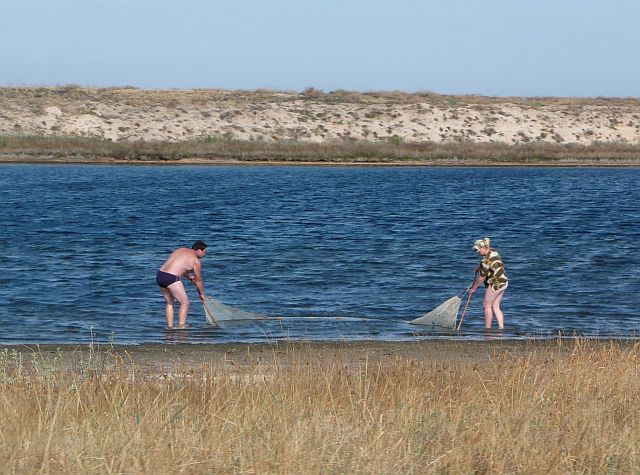 Locals netting in one of the small lagoons along the spit. 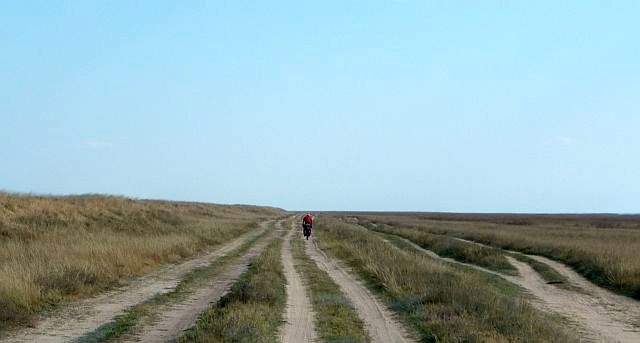 We passed this lone cyclist on the track. 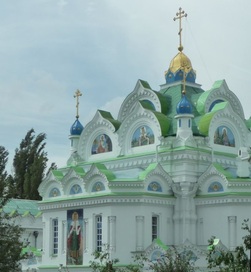 Even the churches have a sunny holiday look to them.
We follow the road south to Feodosiyi whose beach looked like Margate near Brisbane. Many Russian tourists were enjoying the sunshine there. The road turned inland through the vineyards then towards the coast to Sudak with its Genoese fortress, the best preserved on the northern shore of the Black Sea.
We saw an excellent campsite from the fortress and drove through the crowds to it. A Russian couple had already camped there and they invited us to share fresh fish they were barbecuing, grapes, lavash bread, tomatoes, basil and cheese along with local wines. It turned out they had seen us (I guess the truck does stand out) earlier in the day at the truck wash and stopped for lunch. Great tasting meal and interesting company.
Saturday 14 September
There was some kind of rock climbing event up the cliff face behind us until the rain came. We decided to move rather than get caught in the slippery mud and planned to move on to Yalta. But that was until we happened to see Miles and Marina drive passed as we were eating lunch. Camped together just out of town. 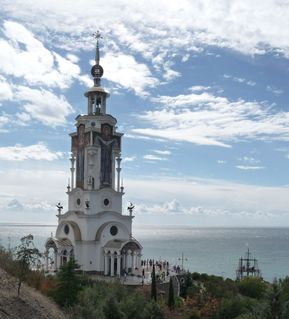 Church built in memory of those lost at sea.
Sunday 15 September
Drove from our campsite up the valley to see a gorge prior to going along the coastline where we saw a well sited church built in memory of all those lost at sea.
Finally arrived at Alushta, a popular holiday destination. Unfortunately the rain came and the beach quickly cleared.
The weather had been windy, rainy, warm and cold. Then as we went inland towards the caves at Mramorne, we added foggy to the list!
Tuesday 17 September
A day around the port of Masandra, a visit to Livadia Palace where Stalin, Churchill and Roosevelt attended the Yalta Conference after WWII and a pretty drive around some very narrow roads around the mountainside.
Wednesday 18 September
A day of catchup - washing, cleaning etc and enjoying the view.

Holiday town of Balaklava with its protected anchorage.
Turned coastal to see Balaklava, a holiday town these days. But during the cold war a top secret Soviet underground submarine base was built there with direct access to the Black Sea. Although cliffs surround the hidden opening to the harbour the base was built to withstand a nuclear attack. It is now an interesting museum.
We drove onto Sevastopol, the home of the Russian Black Sea Fleet where we camped the night.
Friday, 20 September
Scenery of forested slopes with some impressive bluffs along ridge lines before we arrived at Bakhchysaray. First was the 16th century Khan's Palace which had escaped destruction and been reasonably well maintained. Next was a tour to Chufut-Kale, a hilltop cave city used from 6th - 16th century and the Uspensky cave monastery which were both impressive but the ride in the Russian jeep was a highlight in itself.  Now I know why it was soft-topped with no windows and well cushioned seats and used little fuel. The driver only had the ignition on for the last 2kms of the 8km downhill trip! 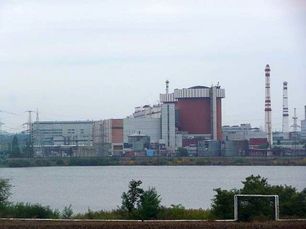 Nuclear power station?
21, 22, 23 September
A few driving days in wet and windy conditions as we head for Kamyanets-Podilsky. Passed a rather clean and new looking power station - nuclear?
We found an interesting campsite down a narrow leafy lane. Nowhere to pull off until we came upon a cemetery, so that was it. It was quiet, sheltered from the wind and we were not visible from the lane.
Tuesday 24 September
Drove into Kamyanets-Podilsky and parked near the old town. Kamyanets-Podilsky is known for its well preserved fortress which is positioned at the neck of a steep sided isthmus on which the old town is built. There is a small river around the isthmus and more cliffs on the other side. Pretty amazing natural fortification.

Wednesday 25 September
Onto Lviv, our last stop in Ukraine prior to entering Poland on our way to Austria where we are storing the truck. The weather is getting colder.
We passed through a poorer region that was quite religious. Neat and tidy with most houses having a well. 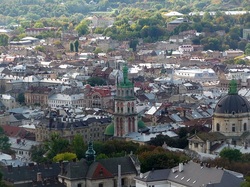 Lviv from the high castle lookout point. No castle there now.
26, 27 September
Three nights in a hotel as Guy gets over a headcold and has a break from driving, and its cold outside!
Lviv is a beautiful city with many museums, interesting old buildings, churches and shops. We even had a clear day for sightseeing. 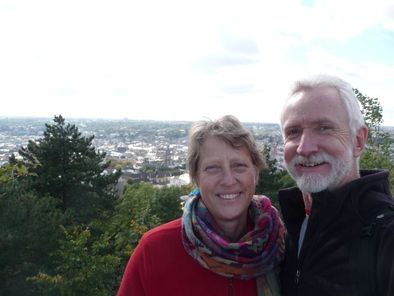 Guy and Cheryl in Lviv.
Saturday 28 September
Off to Poland passing many cars parked on the side of the road as their drivers walk through the woods collecting buckets of mushrooms.