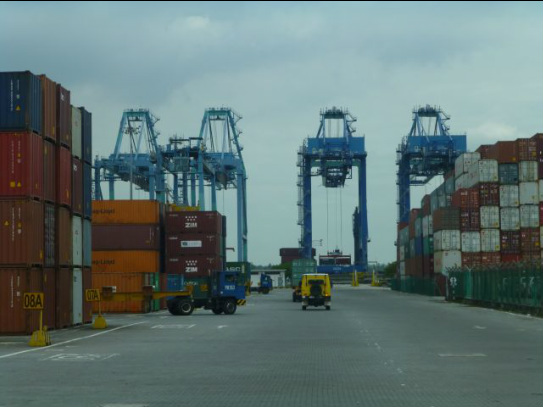 Freedom for Bee after a month in a container.
Friday 1 March was spent packing and preparing the truck and walking around central KL, hence Petronas Towers.

Saturday 2 March
Buying perishables and 'and so it begins' as Jon famously said. Down to Malacca (Melaka).
We stay on an area of reclaimed land near a beach popular with locals. Lots of stalls selling food, kites, toys, offering rides etc. Saturday night is a big night and the locals were still around at 3.00 am.
And here is the route for the day. 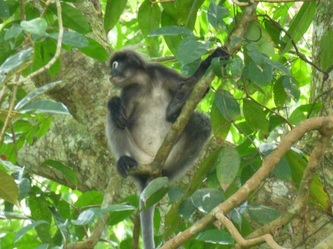 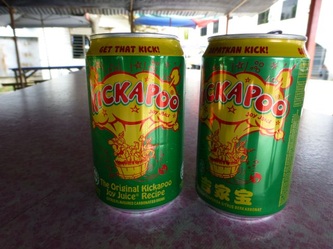 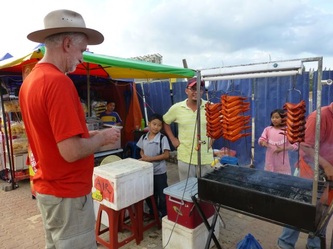 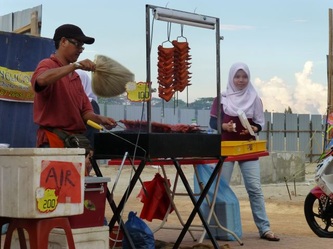 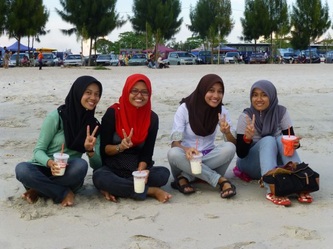 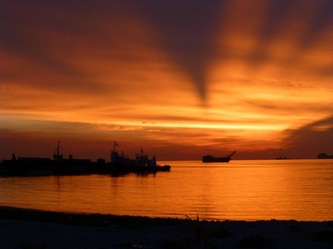 Sunday 3 March
Checked out Malacca and then headed inland towards Taman Negara. 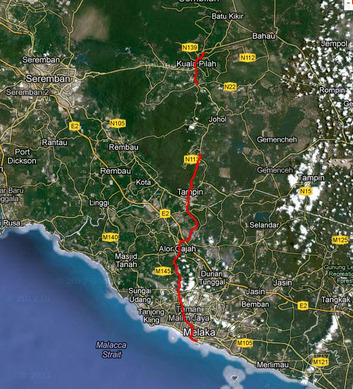 Malaka to Kuala Pilah. Route is broken due technical learning curve. Just imagine the red lines join in the middle.
We stop for the night and start to set up on a vacant lot but are moved on by the local Polis – Go. Go. Go! 45 minues later we pull up at a vacant unfenced, ungated area and ask locals if they mind if we stay. They don't seem to mind and neither do the muslims whose carpark we are in. The mosque had prayers at 9.30pm and thankfully the next call to prayers came across the loud speakers around 6.00am. I actually managed to sleep through it as I had been awake late listening to a truckie pull in at midnight to take advantage of the facilities the mosque offers. I heard all that as I was worried about being told to move on again. 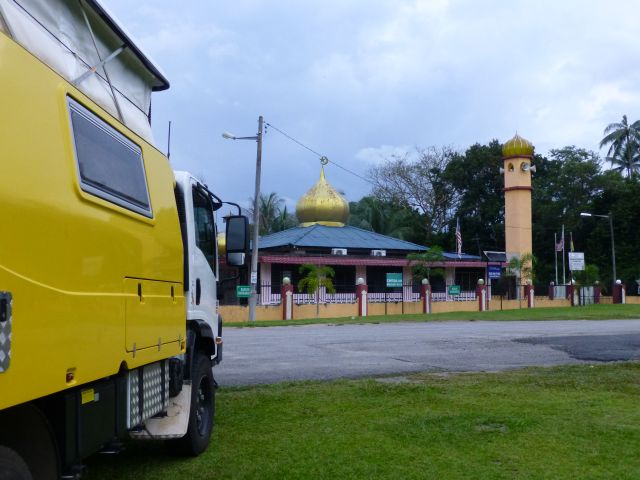 I actually slept through the 6am call to prayer. 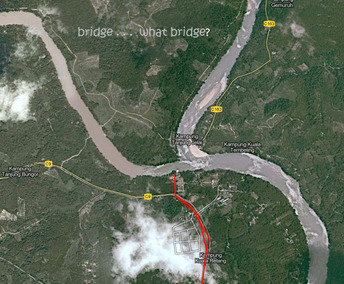 30 miutes of driving to a non-existent bridge - oh! another kuala
I chose the hard copy and this meant doubling back after 30 minutes of driving.  The bridge shown had never existed! Arrived to riverside camp on Temberling River at Kuala Tahan. (Lots of Kualas in Malaysia. It means the confluence of 2 bodies of water.) See today's drive.

Tuesday 5 March
Spent the morning across the fast flowing river in Taman Negara NP climbing to a couple of lookouts and walking the 45m high suspension bridge. I was thinking of you Ann as I am not one for heights either. Interesting local guide, Fahid, for the walk. Fahid also took us on a boat trip up the river to see a local tribe who had originally come from southern Africa. Amazing. How to make darts for a blowpipe was an interesting highlight as well as firemaking. 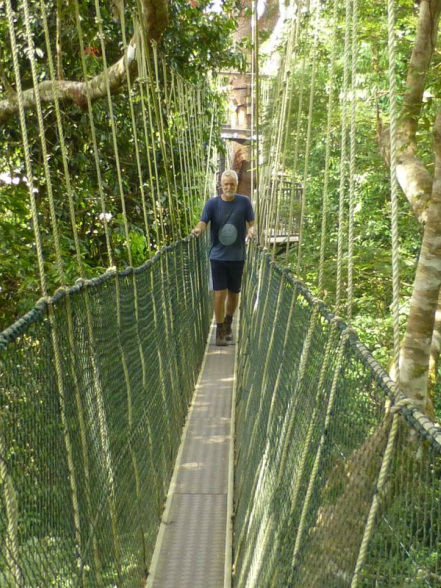 Just do it. 45 metres is not far to fall!
The trip up the river was refreshing especially when Rob put his hand in the water. We were shown firemaking using rattan cane rubbing around some balsa type wood to cause a spark which was then blown. Also shown a blowpipe for darts and how the darts were made - very quickly. Had a go at blowing the darts and it was surprisingly easy and accurate. Guy was able to blow it higher than the surrounding trees. So it looks like gibbon for dinner for him. 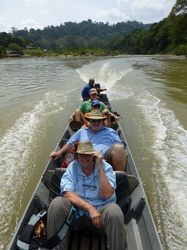 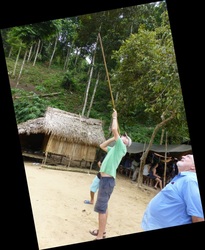 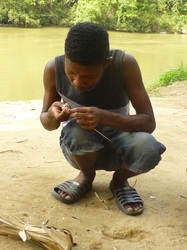 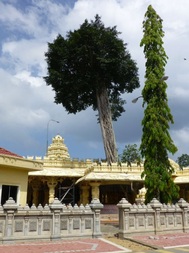 Tree was there first.
Wednesday 6 March and we are on our way again. This time towards the east coast. We passed a large Hindu temple built around a tree and went on a wild goose chase looking for a waterfall or cave but decided to return to the main road and head for a beach camp at Cherating. Next a cool drink/beer. Yes these days of travelling are hard yakka! See the days hard work on the road to Cherating. 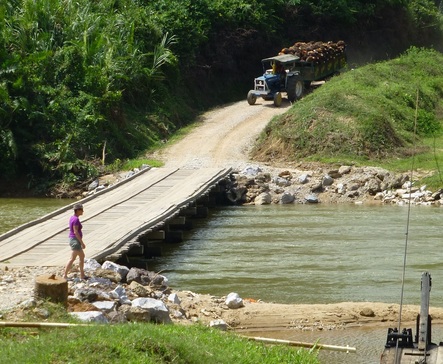 Our search for a waterfall or cave proved fruitless. We just went deeper and deeper into the palm oil plantations.
Great surf during the monsoons but they have just finished so rather tame but nice to swim again. The water was a little too warm to be really refreshing. I think we are gradually acclimatising.
We had a meal out where we chose from a variety of fresh fish, squid, prawns or crab. The fish was 5 ringgit/100 gm which came to about $8 per fish cooked as you liked.
Thursday 7 March
Enjoyed a lazy Thursday catching up and doing some of the things that weren't done before we left e.g. screwing in pockets, sealing and then planning for the next few days. Enjoyed a walk along the beach, through the village and another swim.
Friday 8 March
It's a late sunrise here, around 7.30am and so we seem to be ready around 9am to drive to Tasik Kenyir. We head off with Rob and Robyn leading for the drive up the coast and then inland towards Tasik Kenyir, the largest dam in SE Asia. We drive to see the huge dam wall and spillway but are not allowed through to the top. What we see through the trees is very impressive.
The towns are very quiet as it is Friday, the muslim holy day and most people seem to be at prayers around lunch time. So we make our own near the dam wall.
We arrive at the Tasik Kenyir Information Centre to see a huge green body of water with heavily forested islands and surrounds, and huge signs about a triathlon on Sunday! Not for me. Camp in a picnic area on the shore of the lake and not far from a waterfall after a reasonably long drive.

Saturday 9 March
It's a pleasant place and so we arrange a boat trip to an island waterfall and then a spot of fishing on our day off.
No fish but a very peaceful and relaxing place to spend time. 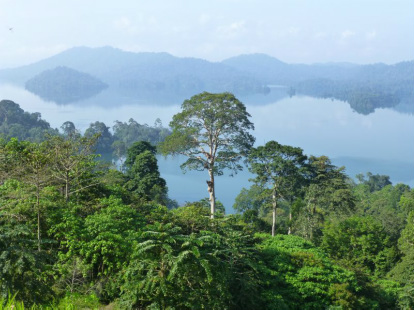 Sunday 10 March
Headed west onto a road which was non existent on the GPS and pocket earth, under construction on the hard copy map but existing and driveable according to the few locals who seemed to know. 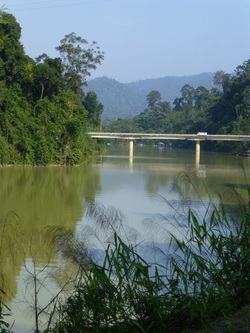 The road had been an amazing feat to build, mostly 3 laned, but unfortunately it had been allowed to run down, badly pot holed in places and diverted around other parts that had washed away. Beautiful views of the lake though.


Robyn and Rob crossing a bridge over Tasik Kenyir 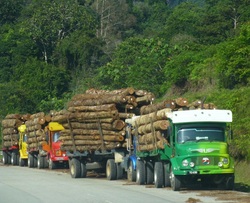 ​The next part of the road was used by huge lorries overloaded with logs. There were more than 20 loaded lorries waiting at one station. Eventually we came to mapped roads.
Did some restocking at Gua Musang and was one of the few not wearing a headscarf.

Drove through some deforested and badly eroded areas where palm oil plantations were going in. Our altitude was about 300 metres and we were aiming to get to the Cameron Highlands at over 1500 metres in a couple of hours. We eventually started to climb and wind our way up the mountain on good roads. As the temperature dropped we encountered a bizarre landscape of domed, plastic greenhouses. Then it poured rain as we attempted to drive around a broken down school bus in the narrow, stall lined streets of Brinchang. After help from locals we finally found a place to camp in the Forestry Department at no cost. It had been a long day.

We love the temperatures in the low 20s here and so we decide to stay for 3 nights in what appears to be Landrover country. Not sure why but the Cameron Highlands has one of the highest concentrations of Landrovers outside a Landrover factory. A huge influx in the '70s I'd say and they just keep running.
Lots of 'houses' growing everything from fruit, vegetables, roses and other flowers to cacti and a butterfly house, picturesque tea plantations and roadside markets on steep windy well built roads. But many buildings are run down as are many public places.

Thursday 14 March
We woke to the stench of a beach at low tide. A beach with oozing soft silty mud. We hightailed it inland to the hills leading to the northern beaches before eating breakfast. See map to new campsite
Stopped at a coffee and chocolate shop and met the Indian couple who ran it. They showed us a much more pleasant campsite on the beach just down from a Hindu temple but we were to find out that it was quite a hotspot at night when it was high tide.
A few guys came down there in the late evening to fish and although they had to squeeze by us to stay on the sandy track, they were not intrusive. They left around midnight to be followed a short time later by a family consisting of Mum, Dad, 2 daughters, uncle, grandma and grandpa and their FLUORO. They also didn't really worry us but their campsite 3 metres away was not conducive to sleep. A young girl cried out something like "Big fish, big fish" which stirred Guy. But that must be Malay for something else. They left around 4 am. (For a brief moment I thought of work.....Thank goodness I didn't have a morning shift.)
Saturday 16 March
So after a couple of enjoyable days looking around Penang, we head across the Penang Bridge north to the Thai border. Our first border crossing.

We will add a page about our impressions and unusual sights in Malaysia soon. Meanwhile read on for Thailand.